Homeowners are making 5 figures per year in home equity

Today’s homeowners are building wealth like few times in history.

According to the Federal Housing Finance Agency (FHFA), home values are up more than five percent from one year ago.

What’s more, home value appreciation is nothing new. FHFA says home prices have increased by about 5% per year since 2012.

That means the renter who bought the average home four years ago has “made” more than $40,000 to date. Some have earned much more — six figures in some cases.

What’s surprising, then, is “advice” saying you should buy a home only when you have a 20% downpayment.

Putting 20% down is riskier than making a small down payment, but it’s also costly.

Even strong opponents of mortgage insurance find it hard to argue against this fact: PMI, on average, yields 530% return on investment. 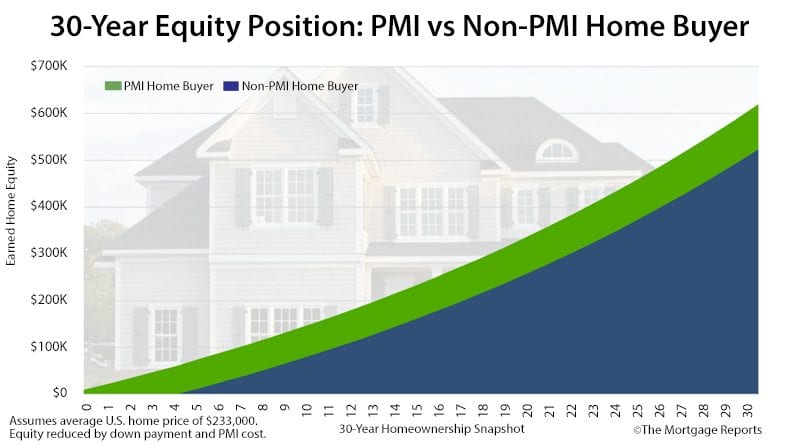 What is private mortgage insurance (PMI)?

Private Mortgage Insurance, or PMI, is an insurance policy. It pays the lender back when a loan goes into default.

It is paid for by the homeowner but benefits the lender.

This is where most home buyers get hung up.

They don’t like the idea of paying an insurance policy that protects the lender. It should benefit the buyer, the logic goes. But PMI is not completely one-sided.

PMI benefits the buyer in a number of ways, most prominently via reducing the down payment required to buy a home.

In many markets around the United States, an “affordable home” costs north of $400,000. Assume for a moment that mortgage insurance — both private and government-sponsored — did not exist.

The homeowner would need $80,000 plus closing costs to buy a home. In a PMI-free world, lenders would likely require 20% down, with no exceptions.

In order to reduce risk and make home lending viable long-term, lenders created that 20% down minimum. It gives the lender adequate “room” to re-sell the home should the borrower lose a job, experience a medical emergency, or otherwise become unable to pay the mortgage.

The lender is not trying to make a profit from the foreclosure by building in a 20% buffer. It is trying to cut its losses: Selling a foreclosure home at market price is extremely hard.

The median sales price of foreclosed homes is at least 40% below that of non-distressed sales, according to real estate data company RealtyTrac.

Lenders — more often than not — lose money when they foreclose.

PMI pays the lender back those losses. In turn, lenders are profoundly more lenient in their lending practices.

Buyers can make the initial home purchase now, instead of saving for years or decades toward the 20% downpayment.

That benefits the buyer, who starts building wealth immediately.

Use PMI as a wealth-building tool

Homeownership is the primary means of wealth building in the U.S.

Owning a home is no path to quick riches. Rather, it’s an investment that pays off over time, even considering cyclical downturns.

Over that time, inflation has risen 75%, says the Bureau of Labor Statistics. A first-time home buyer in 1991 has beat inflation, plus made an additional sixty-five percent return on investment.

Inflation-adjusted return is a tangible way to look at wealth increases, but there are non-tangibles, too.

For instance, a homeowner who purchased a home in 1991 is likely near the end of its 30-year fixed mortgage. Soon, the homeowner will be mortgage-free. Cost of living will drop.

The owner holds a considerable asset, too.

Yet, a person who chose to rent in 1991, and continued to do so, now pays ever-increasing rental prices.

Worse, it’s likely this person has no sizeable asset unless he or she has contributed to a retirement account or other investment consistently over two or three decades. Many have not been this forward-thinking.

A house is a forced savings account. Housing expenses are required whether you rent or own. But when you own, you deposit a small chunk toward your future wealth.

So what does PMI have to do with this? It starts the wealth-building process sooner. You can be on the winning side of rising home values.

And, without PMI, you may be unable to save fast enough to catch up with home prices.

Securing a home at today’s prices is a solid advantage. But there’s another one: PMI is an investment with a return like few others.

Verify your home buying eligibility with or without PMI. (Feb 19th, 2019)

Home buyers avoid PMI because they feel it’s a waste of money.

In fact, some forego buying a home because they don’t want to pay it.

That could be a mistake. Data from the housing market indicates that PMI yields a surprising return on investment.

Home price acceleration has been higher of late — well past 5%. However, taking a longer view provides a more balanced, realistic view of the housing market — and what you might “earn” per year as a homeowner over the long run.

Keep in mind that the three-and-a-half percent gain factors in the housing downturn of the last decade. That percentage is not derived by looking only at a “rosy” period of market history.

The average home costs $233,000, per National Association of REALTORS® data. The following is an example of a buyer who purchases the “average” home with and without PMI.

First, assume the buyer puts 5% down.

The PMI cost is $135 per month according to mortgage insurance provider MGIC. But it’s not permanent. It drops off after five years due to increasing home value and decreasing loan principal.

You can cancel mortgage insurance on a conventional loan when you reach 78% loan-to-value.

The homeowner’s snapshot at the end of year 5 looks like this:

It’s near impossible to make that kind of return in the stock market, retirement account, or another financial instrument.

PMI, then, can be viewed as an investment — a very sound one — and not a waste of money.

But that may not be where PMI’s benefits end. There is another factor when postponing a home purchase to avoid PMI: opportunity cost.

What it costs to avoid PMI

Assume a different homebuyer followed “best practices” as posited by many financial and housing advisors today.

The buyer chose to avoid PMI. Instead, he or she opts for a 20% downpayment: fifteen percent more than the buyer who chose PMI.

The buyer has some saving to do.

He or she budgets and plans to accumulate $10,000 per year toward the goal — difficult but doable. In three and a half years, the buyer raises the full 20% downpayment.

He or she is now chasing higher home prices. In 3.5 years, home prices will have risen nearly thirteen percent — factoring in compound interest — or around $30,000.

The buyer no longer needs 20% down based on home prices of three years ago. He or she needs twenty percent of the current home price.

The increase pushes out the buyer’s time frame. He or she must save four years to put twenty percent down. During that time, the home buyer forfeits $34,000 in lost home equity.

Add up lost equity and extra downpayment costs, and waiting to buy has cost this buyer thirty-two thousand dollars — even after considering the PMI expense he or she “avoided”.

There are many good reasons to delay buying a house. Skipping PMI is not one of them.

If you’re avoiding PMI, go ahead and avoid paying mortgage interest, too

Home buyers often avoid PMI because they feel it’s an “unnecessary” or “extra” cost that benefits the lender.

But the same argument could be made for mortgage interest.

Any time a mortgage lender — or any lender — makes a loan, they charge interest. The profit from this arrangement keeps the lender in business. In turn, they keep lending.

It’s how all businesses work. Just like any company, mortgage lenders provide a service: the ability to buy a home.

PMI-averse home buyers, if holding true to convictions, should not apply for a mortgage at all. Rather, they should save up the entire home price in cash.

Under the anti-PMI argument, mortgage interest, like PMI, is an “unnecessary” and “extra” cost that benefits the lender.

But here’s the thing: Mortgage interest is much, much worse.

The first five years of PMI, on average, would cost a home buyer around eight thousand dollars for the average home. Mortgage interest costs $42,000 over the same time period — more than five times the cost of PMI.

Not many buyers or home buying experts argue against getting a mortgage, citing its necessity in today’s market.

As a buyer, you should never feel non-savvy if you decide to get PMI.

One PMI provider, Radian, layers its MortgageAssureSM product on top of its standard PMI coverage. This program offers job loss protection for the buyer.

The insurance covers the borrower’s payments — up to $1,500 per month for six months — in the case of a job loss during the first two years of the loan.

The program comes at no additional cost for home buyers who make a down payment between 3-5% on some loan programs.

This is peace of mind for the homebuyer and a very good reason to check which PMI providers your lender works with.

Mortgage lenders often work with three to five PMI providers. Most often, the lender will choose your provider for you. The choice is often arbitrary or based on who the lender is accustomed to using.

But the borrower can have a say in the matter. If you know of a PMI provider that offers a certain benefit, don’t be afraid to ask for it.

The small request could end up making a big difference later on.

Popular loan programs like the FHA loan and USDA mortgage come with their own versions of mortgage insurance. This insurance is government-backed, not provided by private companies as is PMI.

Government mortgage insurance has the same purpose, though.

The cost comparisons work out differently: FHA loan mortgage insurance rates differ from those of PMI. Often they are lower.

Generally, PMI is best for those with good income and credit, while government-sponsored mortgage insurance is more forgiving in these areas.

The following chart compares cost differences between the three major types of mortgage insurance, based on a $250,000 loan amount, and varying credit levels.

As a buyer, check into conventional and government loan programs and mortgage insurance options. Check costs and qualification standards.

Chances are that you can qualify to buy a home much sooner than you thought possible.

How do I know if PMI is right for me?

Private mortgage insurance isn’t for everyone, but home buyers should check potential returns before they automatically refuse it.

Get a home buyer eligibility check, which includes a mortgage insurance analysis for your situation, and comes with no obligation. It takes just minutes to start.