When I started Get Rich Slowly in 2006, I had no idea other money blogs existed. I’d been blogging about cats, computers, and comic books since 1997 — before blog was even a word! — and I thought my new venture might be the first blog about personal finance.

I learned quickly that there were already dozens (dozens!) of people blogging about money on the interwebs. For instance: 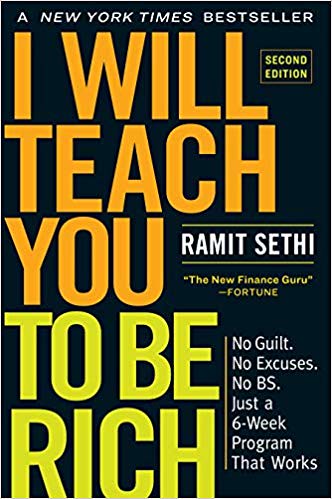 All four of these folks built and grew successful sites because they produced quality content. But Ramit might be the most successful of all. Nowadays, he produces helpful courses on a variety of personal development subjects. He hosts conferences. He wrote a best-selling book. And he never sold his website.

Instead, I Will Teach You to Be Rich has evolved as he’s evolved. In recent years, Ramit has distanced himself from the world of personal finance. Nowadays, he’s focused on the many different ways his readers can build a Rich Life.

If you’ve read my other book reviews, you’ll note that I sometimes shy away from giving an overall evaluation, opting instead to talk about some aspect of the book I liked (or didn’t). When this happens, it’s usually because I don’t think the book is that great.

I won’t be coy today. I Will Teach You to Be Rich is one of the best personal-finance books on the market. It’s great.

Let’s take a closer look at why I like it so much.

Why Do You Want to Be Rich?

“Your goal probably isn’t to become a financial expert,” Ramit writes at the start of I Will Teach You to Be Rich. “It’s to live your life and let your money serve you.” His book aims to show you how to make that happen.

To start, he urges readers to not get hung up on minutiae. He warns them not to give in to modern “victim culture”. Instead, he wants people to put the excuses aside and agree to take an active role in building their financial future.

Crafting that future starts by asking a simple question: Why do you want to be rich? “When you picture your ideal life,” he asks, “what are you doing in it?” Similarly, I ask new GRS readers to take the time to write a personal mission statement. Ramit doesn’t go that far, but he does urge his audience to do some self-reflection.

The bulk of the book is devoted to a “six-week action plan” designed to create a solid financial infrastructure.

This six-week action plan gives I Will Teach You to Be Rich a clear, logical structure. Having written one print money manual and two ebooks, I know how difficult this can be. (Of my books, only the Money Boss Manifesto has a structure I like.) Ramit gets this right, and it makes a huge difference.

The last few chapters cover miscellaneous subjects that couldn’t be shoe-horned into this six-week program. Ramit discusses pre-nups, for instance, using his own recent marriage as an example. He explores student loans, taxes, and financial independence.

Plus, he includes an excellent eight-page section on salary negotiation. This is something for which he has a $588 for-profit course, yet he doesn’t ever mention that course in the book. I appreciate that.

For more about Ramit’s opinions of the early retirement movement, check out his appearance on the Mad Fientist podcast. 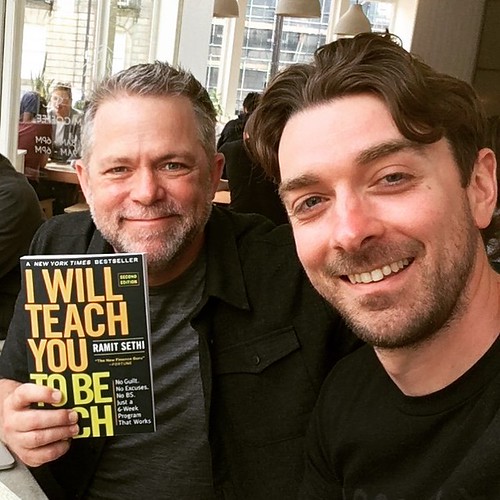 The Mad Fientist and me, working together in Edinburgh yesterday

For me, the primary strength of I Will Teach You to Be Rich is (and always has been) that it’s packed with actionable advice. Too many money books talk about terms and cover general concepts but never give readers specific steps they can take to implement this info in their lives.

Ramit, on the other hand, is all about action.

In I Will Teach You to Be Rich, he says which credit cards, apps, and bank accounts he uses (and he tells you why). He shares several word-for-word scripts that you can use to dispute charges, get fees waived, and more.

He urges readers to focus on Big Wins, not on small (but painless) actions that have little real impact on their financial future. (What’s the point of clipping coupons when your mortgage debt is crushing you? You need a new house, not cheaper toilet paper!)

He explains why it’s okay to spend deliberately on the things you love as long as you’re careful to cut out the stuff that doesn’t matter.

Does all of this sound familiar? Does it sound like the stuff I say all of the time here at Get Rich Slowly? That’s because it is. My financial philosophy is closely aligned with Ramit’s. And, in fact, key parts of it actually come from from Ramit. (He’s where I learned about conscious spending, for instance, and about building barriers.)

In short, Ramit focuses on the choices that will create the greatest improvements in his readers lives. He doesn’t pretend to cover everything. He’s only interested in the 20% of actions that will help folks achieve 80% of results. He ignores the rest.

Ramit has made significant changes to the new edition of I Will Teach You to Be Rich. He’s corrected errors. He’s added new material. And he’s changed the overall theme.

In this new version, he’s deliberately emphasized and expanded on his Rich Life concept, which was little more than an afterthought in the first edition. During the intervening ten years, “living a Rich Life” has become the focus of Ramit’s financial philosophy.

He’s also taken this opportunity to fix problems with the original. “Ten years ago, I made three mistakes when writing the first edition of this book,” Ramit says. Those mistakes?

In 2009, many GRS readers complained about the book’s tone. They found Ramit’s “in your face” style annoying. While the book’s voice is still breezy, the irreverence and silliness are much more subdued. You won’t find many lines like this anymore: “Why does just about everything written about personal finance make me want to paint myself with honey and jump into a nest of fire ants?”

Here’s a final (but vital) change: The book’s numbers and examples have been altered to appeal to a broader audience. The original edition was clearly aimed at young adults. The book’s examples featured folks aged 25 to 35. The new edition deliberately includes examples for an older audience.

A Rose By Any Other Name

I had only two real complaints about the first edition of I Will Teach You to Be Rich. Like a lot of people, I didn’t care for the tone. But I also didn’t like the way Ramit sometimes plays word games.

The tone of the new edition is much improved, as I’ve mentioned, but the word games remain.

Ramit pretends to hate budgets, for instance, writing: “I hate budgeting. ‘Budgeting’ is the worst word in the history of the world…Because we know that budgets don’t work, I’m going to show you a better way.”

First, budgets do work. According to The Millionaire Next Door, a majority of millionaires have a budget. (Of those who don’t, many others create “an artificial economic environment of scarcity” that mimics a budget.)

Bad budgets don’t work. Good ones do. (We looked at how to budget effectively last week.)

Second, Ramit’s alternative to budgeting is…budgeting. He calls his budget a “conscious spending plan” but…it’s a budget. It’s a good budget explicitly based on the 60% Solution. But it’s still a budget. (What’s more, he advocates You Need a Budget and the envelope system!)

I don’t like this sort of semantic gymnastics. It’s pointless.

Really, though, this is a trivial complaint, something that’d only bother a money nerd like me. If calling his budget a “conscious spending plan” will help his readers improve their personal finances, great. Go for it. Play those silly word games.

I Will Teach You to Be Rich

This new edition of I Will Teach You to Be Rich is bigger and better than the first in almost every way (and that’s saying a lot!).

In my review of the first edition, I wrote:

Ramit’s book is great, but it’s not for everyone. First of all, it’s targeted almost exclusively at young adults. If you’re under 25 and single, and if you make a decent living, this book is perfect. But if you’re 45 and married with two children, and if you struggle to make ends meet, this book is less useful.

The second edition of I Will Teach You to Be Rich is different. This time around, I think the book would be useful for somebody who’s 45 and married with two children. There’s no doubt that the tone and content still skew young, but not in a way that’s off-putting for old fogies like me.

Over the past decade, I’ve recommended (and handed out) I Will Teach You to Be Rich to many young adults. In the decade to come, I’m confident that I’ll be recommending (and handing out) copies of the new edition to people of all ages.

Why? Because there’s no bullshit in this book. There’s no hedging, no obfuscation, no fluff. This book is smart, bold, and practical. It’s filled with tips that actually work.

Personally, I’m sad that Ramit isn’t as involved in the personal-finance space as he used to be. There are few people with original things to say about money. He’s one one of them. Whereas most people parrot tropes without thinking, Ramit is unafraid to challenge conventional assumptions. His voice is valuable. I wish we heard more of it.