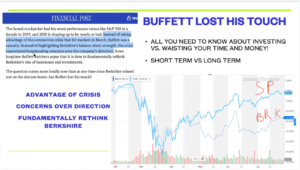 Many say Warren Buffett lost his touch because Berkshire has been underperforming the S&P 500 index. The arguments are that Buffett didn’t take advantage of the 2020 stock market crash, how his $137 billion are idle, that Occidental, Heinz and Airlines have been a huge mistake and how Buffett should be investing in the new stocks out there.

The main message is the differentiation between long-term sustainable investing and speculation. See what best fits you!

Has Warren Buffett Lost His Touch?

Good day fellow investors. In a recent Financial Times article, they said, how of course Warren Buffett lost his touch. And that’s a thought that you can see everywhere now and the biggest fear when it comes to Berkshire, investing in Berkshire stock and Warren Buffett.

I really want to discuss this article, because it touches on the most important differences between investing and simply following the hot things in the market. So, you have to decide whether over your life cycle over your life, will you be a long term investor, Buffett is the perfect example of that or you will follow the money, follow what others are doing follow what your neighbour neighbours are doing, owning Tesla, etc, etc. Short term it looks so attractive to own Tesla and other things. Long term Buffet makes the difference.

So in the Financial Times post, look at this sentence, “instead of taking advantage of the Coronavirus crisis.” So you have as an investor, you have to take advantage of all the short term opportunities out there. “Buffett was a casualty.” So he lost a little bit, his stock didn’t rebound as the market so that’s a disaster.

So short term, short term short term. “Instead of highlighting Berkshires balance sheet strength, the crisis accelerated long standing concerns over the company’s direction.” Over investing versus all what other people are doing. And funnily enough, I found this article from 1999, saying, “What’s wrong, Warren.”

Did Buffett lose his magic touch? And then the article from 1999 discusses how the stock is down 23% in 1999 against the S&P 500 being up 18% so short term focus, how these stocks didn’t do that well, how there was issues with reinsurance that they bought, general reinsurance, and how he missed on the internet train, the Coronavirus recovery now, how he’s not buying what’s hot, what’s the new out there, and how he sticks to the old boring general insurance, etc, etc. So how this is a problem? He’s already 70 and he might be missing out. This was 1999.

But yes, of course now things are different. This run up is because of interest rates going down the s&p 500 price earnings ratio going up, dex is going down. And Berkshire still keeps its price earnings ratio of around 10. Like we discussed in some video, so yes, one thing is certain returns on invested capital here were about 15%. The target was 10-15% here and over the last few years, Berkshires target is 8%. But you have to understand, okay, this is what we do 8% over the long term on this huge capital and that will likely outperform the S&P 500 over the next 10-20 years

You don’t really, our mindset, behavioural finance explains, okay, if I say chronic underperformance over six months, you as a client, you take away your money and you put it somewhere else because someone else made more money. That’s how our mind works. And these are the words you have to be very careful about.

Then “the Occidental deal was an unmitigated disaster, while Buffett 10 billion in investment in oil producer..” He didn’t invest in the producers, he invested in bonds, senior bonds, so senior debt, if the company goes bankrupt, he gets paid first. And then he had the option of getting more stocks through warrants. Okay, he get got that for free, and those are worthless now. That’s, again, how Buffett does things, he always does things with a margin of safety.

Further, talking about the 137 billion. Of course, we cannot understand what Buffett and Berkshire are planning to do they have their insurance, they want to dominate globally insurance. And here comes Buffett long term versus everybody else. Let me ask you a question. Did you need insurance 5-10 years ago? Yes. Do you have insurance now? Yes. Will you need insurance. 5-10-15 years down the road? Yes.

When it comes to tech business, will you be using the same tech you’re using now, then 15 years down the road? We don’t know. And that’s the difference between Buffett and everybody else. And then James ‘shenanigans’ another an analyst. I’m nervous that he may have missed the whole rally. We are talking about Buffett that has been investing for 70 years, and he has missed the rally over the last three months. If insurance companies start to go bankrupt over the next years, Buffett will be the dominant force in insurance for the next decades.

But Oh, yes, he has missed the three months rally. Yes, Mr. James ‘shenanigan’. You are really in line with your surname. What is he selling? So we had chronic underperformance short term, here, they are selling fear of missing out. If you discuss this, okay, Warren Buffett you fear, you sell the fear of missing out on the rally there will be plenty of rallies, plenty of crashes in the future. That’s what is investing, not missing one rally.

Of course, then he says how banking, insurance companies are ugly, boring long term businesses and how he missed in the dotcom era because it was too new. Now it’s not that new. So he has to invest in Amazon. And if you have clients, they are constantly calling you, I constantly get emails, Sven, why don’t you invest in Tesla? What do you think about Square?

What do you think about Spotify, Netflix, this this. That’s hot that’s going up now, and that’s what people want to invest in. But Warren Buffett doesn’t do that. He’s not going for sexy plays. He’s just doing what he has been doing for the past 70 years, and that he knows he will be doing and will be working for the next 70 years. And that’s again, the difference between investing And whatever else we can call it speculating. Can you work again?

So now at the end of the article in small letters, they found someone who will defend Berkshire because its own and they say Berkshire remains designed to reward investors over time, but not on time.

Berkshire long term investment they say that 8 to 10% over the investments that’s what they are looking or Occidental 8% interest rate on the bond and that’s what you get with huge safety with financial fortress.

So the question is also from this message, are you an investor or not? Are you under the influence of the hot words? Your Tesla owning friends kicking your behind when you come to kog, oh you may just 10% this year we made 500%. So the question is, do we want to make money over time, constantly boring, long term slowly getting richer and richer? Or do we want to follow the Tesla’s make a lot of money here and there, but cumulatively, statistically it shows that it doesn’t really work.

So I really get a little bit pissed when I see these articles attacking Buffett because they simply don’t understand what he is, what he does, what investing is, and therefore I felt, okay, I’m just going to put some slides together to really send a message if I help someone if I give some value. Very, very happy. If you got some value here, and if you like this mindset, please subscribe to this channel. Thanks, click the like and I’ll see you the next video.

The post Has Warren Buffett Finally Lost His Touch? appeared first on ValueWalk.