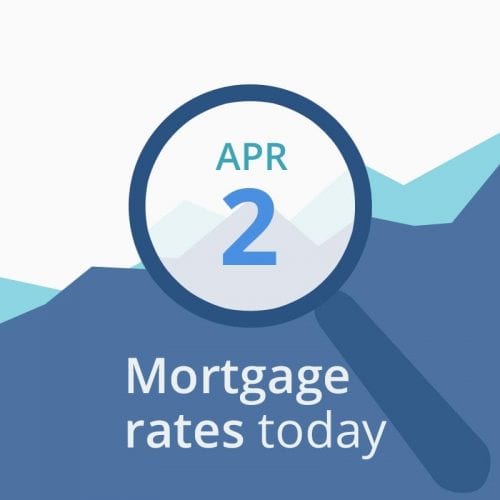 Average mortgage rates rose again yesterday, as we predicted. However, they moved up much more sharply than expected. It was a bad day.

Markets yesterday were seized with optimism. Good economic data from China set the tone for the day and that was fueled by better-than-expected numbers for American manufacturing and construction. Given that recent domestic economic data has been decidedly mixed, it may prove hard to maintain such extreme cheerfulness for long.

Indeed, the data below the rate table are indicative of mortgage rates holding steady or maybe just inching up today. However, regular readers will know these morning snapshots are intended as helpful guides rather than bullet-proof forecasts.

Most of those indicators were just gently drifting this morning. And, absent some other stimulus, they suggest a relatively quiet day for mortgage rates.

Even after yesterday’s sharp rise, it’s still way too early to call recent increases in mortgage rates a “bounce.” Yes, they’re on their way up after sustained falls. But those increases could still turn out to be mere blips in a longer downward trend. Frustrating though it is, there really is no way of knowing immediately what a handful of days mean in the wider context.

Of course, it’s possible the Federal Reserve’s last statement has established a long-term downward trend. But you can still expect to see rises and falls within it as other risk factors emerge and recede. And, depending on how near you are to your closing date, you may not have time to ride out any increases.

Also last week, CNBC ran a different article under the headline, “The bond market has been spooked and so the big interest rate slide is likely not over.” Let’s hope that turns out to be correct and that the last few business days were just blips.

Of course, a recession couldn’t, by definition, arise before you close. But the more investors suspect there’s one on the horizon, the lower mortgage rates are likely to go. And concerns are real. Last Friday, the Comerica Economic Weekly newsletter said, “U.S. economic growth cooled through the fourth quarter of last year, and continued to cool into the first quarter of this year.” And, on the same day, McKinsey & Company published its Economic Conditions Snapshot for March. And it said its survey’s respondents “report an overall wary economic outlook and are increasingly concerned over trade.”

Yesterday, the British Parliament voted on another series of alternative scenarios. But it couldn’t find a single one that could command a majority. Prime Minister Theresa May is determined to pass her own preferred withdrawal agreement. However, Parliament has already rejected that three times, once delivering the biggest government defeat in history. Still,  Mrs. May says she’ll bring it back for a fourth vote.

If that is eventually enacted, a further extension into May (the month, not the prime minister) will automatically kick in to smooth the necessary administrative processes. If Parliament declines to pass that deal for the fourth time, the UK will have to settle on one of two choices.

First, it can crash out without any agreement and hope to trade under World Trade Organization rules. This is the so-called no-deal option. Nearly all economists and most businesspeople think that would be a monumental folly that would cause immeasurable economic self-harm. Or, secondly, it can request a much longer extension (maybe one or two years) during which it can negotiate a new withdrawal agreement — or hold a second referendum or general election to break the political deadlock.

Meanwhile, markets are increasingly focused on current U.S.-China trade talks. U.S. Treasury Secretary Steven Mnuchin and Trade Representative Robert Lighthizer were in China last week to push toward an agreement. And a similarly high-level Chinese delegation is expected in Washington D.C. sometime this week for further negotiations. That is the first time a text might be unveiled. However, one expert told CNBC last week that he didn’t expect to see a draft before May or June.

Still, the administration continues to be generally upbeat about progress. However, others see potential problems. The President’s original Mar. 1 deadline for an agreement passed more than a month ago.  But both sides badly need a good outcome, and for similar reasons: First, to burnish political prestige domestically by bringing home a win. And secondly, to step back from economic slowdowns.

The last Fed announcements will likely add some downward pressure on mortgage rates in coming months. As we’ve seen in recent days, that doesn’t mean there aren’t other risks (currently known and unknown) that could see them rise, possibly sharply. And those recent rises create new grounds for caution. So we now suggest that you lock if you’re less than 30 days from closing. Don’t be surprised if we change that to 45 days sometime soon. Of course, financially conservative borrowers might want to lock immediately, regardless of when they’re due to close. On the other hand, risk takers might prefer to bide their time.

It’s another busy week for economic reports. In particular, markets are likely to be sensitive to this Friday’s official employment situation report. However, any publication can move those markets if it contains sufficiently shocking numbers.

This morning’s headline number for orders for durable goods was far from impressive but better than expected.