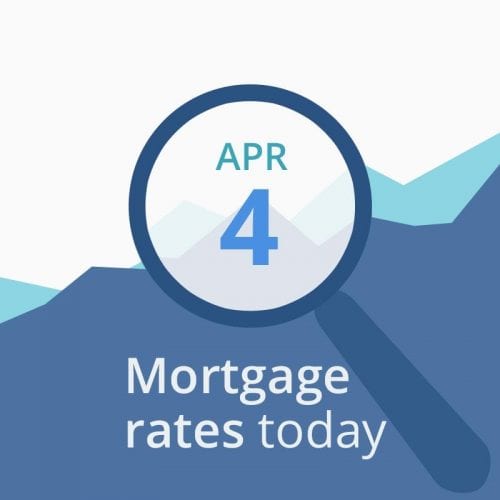 It was another bad day for average mortgage rates yesterday. After a lull on Tuesday, they rose sharply again, though not by quite so much as on Monday. Still, by yesterday evening those rates were close to where they were on Mar. 20, meaning all borrowers’ gains since then have been wiped out. They remain, of course, appreciably lower than they were earlier in March and during preceding months.

Although there are some risk factors that could see rates fall again, we are today changing our rate lock recommendation. We now suggest that you lock if you’re within 45 days of closing. However, it might not quite yet be time to panic.

Because the data below the rate table are indicative of mortgage rates holding steady today or perhaps just inching either side of the neutral line. However, regular readers will know these morning snapshots are intended as helpful guides rather than bullet-proof forecasts.

In spite of all those “bad for mortgage rates/borrowers,” markets look much calmer this morning than they did this time yesterday.

Even though this week’s rises have been significant, they don’t yet constitute a trend. Those are impossible to discern from just a few days’ changes. Frustrating though it is, there really is no way of knowing immediately what movements over a brief period mean in the wider context.

Of course, it’s possible the Federal Reserve’s last big statement has established a long-term downward trend. But you can still expect to see rises (such as yesterday’s) and falls within it as other risk factors emerge and recede. And, depending on how near you are to your closing date, you may not have time to ride out any increases.

You may have read about the recent (though no longer current) inversion of the bond yield curve. And you may understandably have chosen to skip over that bit. But the jargon hides a simple phenomenon: Yields on short-term U.S. Treasury bonds were higher than those for long-term ones. And that’s highly unusual. Normally, you get a higher return the longer you’re locked into an investment.

Of course, a recession couldn’t, by definition, arise before you close. But the more investors suspect there’s one on the horizon, the lower mortgage rates are likely to go. And concerns are real. Last Friday, the Comerica Economic Weekly newsletter said, “U.S. economic growth cooled through the fourth quarter of last year, and continued to cool into the first quarter of this year.” And, on the same day, McKinsey & Company published its Economic Conditions Snapshot for March. And it said its survey’s respondents “report an overall wary economic outlook and are increasingly concerned over trade.”

Yesterday, the House of Commons (the parliamentary chamber closest to our House of Representatives) passed by one vote a bill to force the administration to seek a further, longer extension and to prevent a no-deal Brexit. “No deal” would see the country crash out of the EU without any agreement and hope to trade under World Trade Organization rules. Nearly all economists and most businesspeople think that would be a monumental folly that would cause immeasurable economic self-harm.

Yesterday’s bill isn’t yet law. It still has to win a majority in the House of Lords, which you could think of as a bit like our Senate, though it’s actually quite different. That majority is likely to already exist but it’s almost inevitable that opponents will do their best to block the legislation using procedural devices. Still, there’s a real probability the bill will be enacted this week or next. Indeed, at the time of writing, there was a good chance it would pass later today.

The most likely (but far from certain) scenario now is that the British Prime Minister will request a much longer extension — maybe one or two years — during which the UK can negotiate a new withdrawal agreement — or hold a second referendum or a general election to break the political deadlock.

Meanwhile, markets are increasingly focused on current U.S.-China trade talks. U.S. Treasury Secretary Steven Mnuchin and Trade Representative Robert Lighthizer were in China last week to push toward an agreement. And a similarly high-level Chinese delegation arrived in Washington D.C. yesterday. President Trump is expected to join the talks later today. So later this week is the first time a text could be unveiled. However, one expert told CNBC last week that he didn’t expect to see a draft before May or June. Yesterday’s Financial Times reported:

The two sides remain apart on two key issues — the fate of existing U.S. levies on Chinese goods, which Beijing wants to see removed, and the terms of an enforcement mechanism demanded by Washington to ensure that China abides by the deal.

Still, the administration continues to be generally upbeat about progress. However, others see potential problems. The President’s original Mar. 1 deadline for an agreement passed more than a month ago.  But both sides badly need a good outcome, and for similar reasons: First, to burnish political prestige domestically by bringing home a win. And secondly, to step back from economic slowdowns.

However, markets worry those pressures will prevent a win-win conclusion — and might even result in no deal being reached or a lose-lose one. Once the talks end, investors will digest the outcome in detail. If no deal is concluded, or if the one that’s agreed turns out to be worse than neutral for the U.S., expect mortgage rates to tumble. But, if it’s a win-win — or even just not too terrible and simply brings uncertainty to an end — they could rise.

The last big Fed announcement, which was doveish and ruled out further rate hikes this year, will likely add some downward pressure on mortgage rates in coming months. As we’ve seen in recent days, that doesn’t mean there aren’t other risks (currently known and unknown) that could see them rise, possibly sharply. And those recent rises create new grounds for caution. So today we are changing our advice. We now suggest that you lock if you’re less than 45 days from closing. Of course, financially conservative borrowers might want to lock immediately, regardless of when they’re due to close. On the other hand, risk takers might prefer to bide their time.

Although it’s another busy week for economic reports, nothing significant is scheduled for publication today. Markets are likely to be sensitive to tomorrow’s official employment situation report.