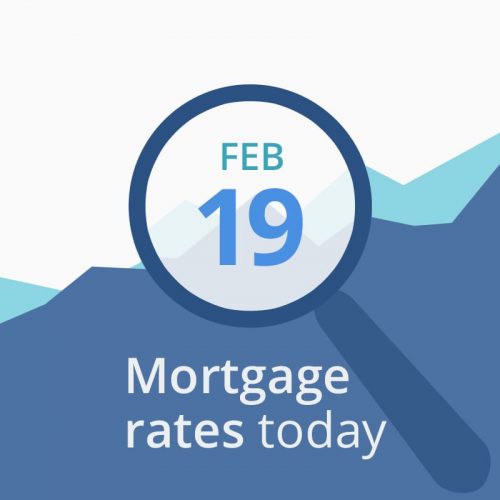 Mortgage rates today are nearly unchanged following  the Presidents’ Day holiday.  Friday’s modest rise ended a week in which rates had risen and fallen on alternate days. This suggests the markets that drive mortgage rates are uncertain which direction to take and will require a trigger to set a more definite trend.

With no scheduled economic reporting this morning, borrowers will have to take their cue from news events, White House wheeling and dealing, and the economic data listed below the mortgage rate table. Experts at Mortgage News Daily indicate that mortgage-backed securities (MBS) and bonds are trading in an increasingly narrow range, and that pattern can’t be sustained much longer. However, they offered no clue as to which direction this breakout will take.

The data below the rate table are mostly indicative of slightly lower or unchanged rates in the short-term.

Today’s financial data were mostly positive for mortgage rates, though only a little. By approaching 10:00 a.m. (ET):

With mortgage rates generally becalmed, and moving up and down on alternate days, you may feel that there’s no particularly urgent need to lock. And you may well be right, although you should remember the risks posed by unexpected events.

You may wish to lock your loan anyway, if you are buying a home and have a higher debt-to-income ratio than most. Indeed, you should be more inclined to lock because any rises in rates could kill your mortgage approval. If you’re refinancing, that’s less critical and you may be able to gamble and float.

A couple of reports this week are marked “DELAYED” in MarketWatch’s economic calendar. This has become routine in the wake of the recent government shutdown.

Thursday is the day likely to see most action this week, with the publication of four reports, any of which could move mortgage rates. However, Wednesday’s release of the Federal Open Market Committee’s (FOMC — the Fed body that determines many interest rates) minutes of its last meeting also has the potential to cause waves. The details those reveal sometimes move markets, if they contain something unexpected. However, there was an official statement after the last meeting, and committee members have had numerous speaking engagement since then. So the likelihood of serious shocks seems limited.