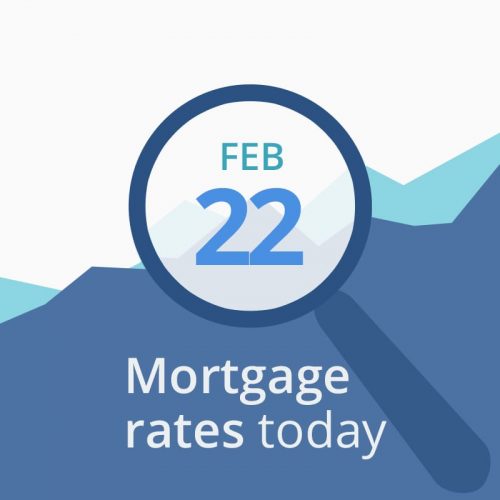 Average mortgage rates rose very slightly yesterday. So slightly, indeed, that your lender may not have bothered adjusting yours, although it may have slightly increased your upfront costs. That’s not too far from our prediction 24 hours ago when we said they’d likely be “somewhat higher.” In any event, we remain in a situation where markets are drifting aimlessly. Chances are, they’ll find a direction — up or down — soon enough. But whether that’s today, next week or even further is the future remains unknown.

Yesterday’s rise still leaves average rates very close to their 12-month low. At their close last evening, they were still lower than they were on Tuesday. So we’re far from pushing the panic button and urging more locking. It’s still possible that, when they finally break out, they’ll go down further.

The data below the rate table are mostly indicative of unchanged or slightly lower rates in the short-term.

These rates are averages. Click here to get your personalized rate now. (Mar 1st, 2019)

Earlier, today’s market data were mostly positive for mortgage rates, suggesting those rates might hold steady or fall a little over the next 24 hours. By approaching 10:00 a.m. (ET), the data, compared with this time yesterday, were:

With nothing special on the economic calendar today and relatively calm markets first thing, there’s little to suggest mortgage rates will go far today. Of course, that could change.

For some time now, we’ve been urging those who are floating to remain vigilant. It’s been more than two weeks since average mortgage rates moved outside a narrow band. And it’s easy to assume we’ve settled into a rut with our wheels spinning — not least because we have. But these sorts of ruts rarely last long. And the tires (or markets, in this metaphor) could gain traction at any time.

So continue to watch markets and news cycles closely. In particular, look out for stories that might impact the performance of the American economy. As a very general rule, float on bad news and lock on good. So, for instance, if the U.S.-China trade talks reach a successful conclusion (China’s vice premier Liu He is in Washington D.C. for talks today), be ready to talk to your lender about locking. But, if they break up messily, relax — unless a similarly important good-news story emerges at roughly the same time.

A couple of reports this week are marked “DELAYED” in MarketWatch’s economic calendar. This has become routine in the wake of the recent government shutdown.

It’s the last day of the week and nothing significant is scheduled on the calendar. So it’s unlikely economic data will have any impact on markets today.