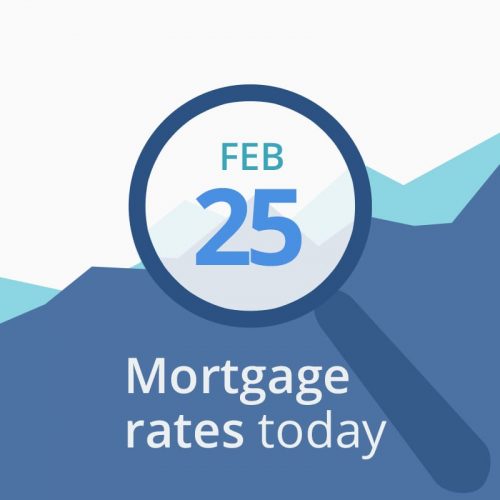 Average mortgage rates inched down by the smallest measurable amount on Friday. That was in line with our prediction for that day. However, two markets that heavily influence those rates (10-year Treasury bonds and mortgage-backed securities) reached recent lows during the afternoon.

One broker pointed out to Mortgage News Daily that rates have bounced up on the last four occasions that happened. Consequently, he was urging his borrowers to lock if they were due to close within the next 45 days. It’s usually a mistake to bet your shirt on the predictability of markets. But you might want to bear in mind that respected professional’s advice when making your own lock/float decision.

The data below the rate table are mostly indicative of unchanged or slightly higher rates in the short-term.

Earlier, today’s market data were mixed for mortgage rates, suggesting those rates might hold steady or move up just a little over the next 24 hours. By approaching 10:00 a.m. (ET), the data, compared with this time on Friday, were:

Stock markets showed a little fizz first thing, mostly as a result of the President’s optimistic talk about the current U.S.-China trade talks. However, other markets seemed less responsive to those White House comments. For example, for 10-year Treasury bonds, which is often key to mortgage rates, was slightly higher. Over the weekend, the President signaled his willingness to extend his March 1 deadline for the imposition of new tariffs. So it might be premature to expect a firm agreement anytime soon.

There is nothing likely to move mortgage rates on today’s economic calendar. But we continue to urge those who are floating to remain vigilant. It’s been more than two weeks since average mortgage rates moved outside a narrow band. That makes it more — not less — likely they’ll break out fairly soon. And markets could regain traction at any time.

So continue to watch key markets and news cycles closely. In particular, look out for stories that might impact the performance of the American economy. As a very general rule, float on bad news and lock on good.

Thursday’s release of gross domestic product (GDP) numbers might be the focus of the week, but Friday’s avalanche of data also has the potential to move markets. The latter contains some figures that are close to the GDP ones in importance. Markets generally factor in forecasts in advance. So it’s the difference between those forecasts and the actual numbers that are most likely to be disruptive.