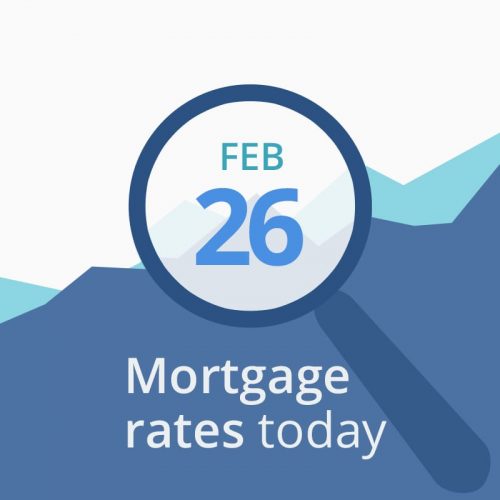 As predicted here, average mortgage rates inched up by the smallest measurable amount yesterday, mirroring Friday’s similarly tiny downward movement. So those rates (and the yields on 10-year Treasury bonds, which they often shadow) remain locked within a very tight range.

Although it’s unlikely items on today’s calendar of economic releases will move them outside that range, there is an outside chance of greater volatility. In particular, Federal Reserve Chair Jerome H. Powell will be testifying before a U.S. Senate committee from 9:45 a.m. (ET) this morning. Markets will be paying close attention, though he’d have to say something remarkable and unexpected for his testimony to have a big impact.

The data below the rate table are mostly indicative of unchanged or slightly lower rates in the short-term.

Earlier, today’s market data were mixed for mortgage rates, suggesting those rates might hold steady or move down just a little over the next 24 hours. By approaching 10:00 a.m. (ET), the data, compared with this time yesterday, were:

In spite of mixed economic data, markets were generally subdued first thing. At this time of the morning, there’s little to suggest that mortgage rates are going to take off in a significant way, either up or down, today. So we’re not tinkering with our existing rate lock recommendations (below).

Still, we continue to urge those who are floating to remain vigilant. It’s been more than two weeks since average mortgage rates moved outside a narrow band. That makes it more — not less — likely they’ll break out fairly soon. And markets could regain traction at any time.

So continue to watch key markets and news cycles closely. In particular, look out for stories that might impact the performance of the American economy. As a very general rule, float on particularly bad news and lock on especially good.

This morning’s data on housing starts were disappointing. However, those for consumer confidence were much better than expected and ended a three-month run of falling numbers. However, neither of these are key indicators. So it’s unlikely they’ll provide the kick markets need to find their direction.

Thursday’s release of GDP numbers might be the focus of the week, but Friday’s avalanche of data also has the potential to move markets significantly. The latter contains some figures that are close to the GDP ones in importance. Markets generally factor in forecasts in advance. So it’s the difference between those forecasts and the actual numbers that are most likely to be disruptive. For example, you might think investors would be disappointed if Thursday’s gross domestic product (GDP) figures were to come in at +2.2 percent. After all, the previous quarter had seen +3.4 percent growth. However, they’d actually be delighted. That’s because the current forecast is for +1.9 percent and markets are already priced based on that expectation.