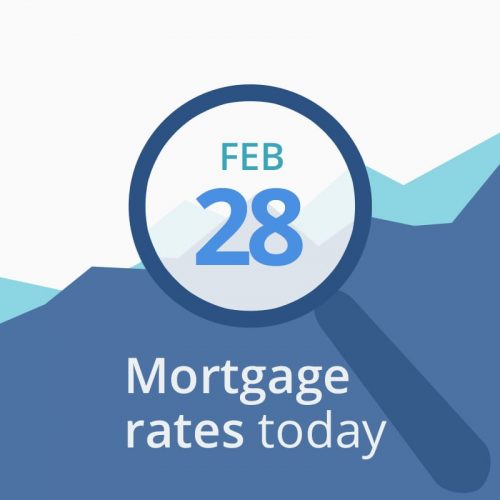 This morning’s all-important gross domestic product (GDP) figure was considerably higher than expected. However, some key markets failed to respond to the news, suggesting it wasn’t enough to stir investors. And, first thing, there looked to be little else on the 24-hour horizon that would likely move mortgage rates far. Tomorrow’s publication of an avalanche of economic reports might just be enough to give markets momentum. But, judging from recent performance, it may be a mistake to hold your breath.

The data below the rate table are mostly indicative of slightly higher rates in the short-term.

So far, this morning seems uncannily similar to yesterday at the same time. Earlier, today’s market data were mostly bad for mortgage rates, suggesting those rates might move up over the next 24 hours — but probably only by a bit. By approaching 10:00 a.m. (ET), the data, compared with this time yesterday, were:

All those “bad” indicators are less worrying than they look. The actual movements behind them remain small.

Some movement in markets would break the monotony. But we should be careful what we wish for. Right now, mortgage rates are close to recent lows. And, when they eventually break out from their tight range (which can’t be too far off), they’re as likely to go up as down.

Having said that, there seems to be a preponderance of bad-news stories at the moment. With a few exceptions, recent economic data have been uninspiring at best. Two nuclear powers, India and Pakistan, began shooting down each other’s military aircraft this week, and were still exchanging cross-border rifle fire and mortar shells overnight, the BBC reports. The U.S.-North Korea summit ended in failure yesterday. Meanwhile, presidential trade advisor Robert Lighthizer went to Capitol Hill, also yesterday, to tell lawmakers “I’m not going to say it’s perfect,” referring to the current state of U.S.-China trade talks. And, finally, this morning’s New York Times reported, “A rising share of economists expect a recession in 2020 if not sooner.”

What’s going on this morning?

This morning’s delayed release of GDP number for the fourth quarter of 2018 (Q4 2018) far exceeded expectations. Yes, it was way down on the third quarter’s growth of +3.4 percent. But economists had seen that slowing in the rate of growth coming. Indeed, their consensus forecast, according to MarketWatch, was for +1.9 percent in Q4. And markets had already adjusted their prices to reflect that forecast.

So how come the good news wasn’t reflected in markets, including those that determine mortgage rates? Perhaps the response is just slow, and momentum will build through the day. In that case, expect a somewhat bigger increase in mortgage rates than currently looks likely. Or perhaps the “preponderance of bad-news stories” described above is causing a sense of gloom that’s killing optimism.

If the news that finally awakens markets is good, expect mortgage rates to rise. If it’s bad, expect them to fall. Of course, that is a very general rule, which comes with no guarantees.

All this means that, if you’re still floating, you must stay vigilant. Some movement, sometime in coming days or weeks, is inevitable. And the longer markets sleep, the sharper and swifter their response might be when they finally wake up. So continue to watch key markets and news cycles closely. In particular, look out for stories that might impact the performance of the American economy.

GDP may be the brightest star in the constellation of economic data, but others shine, too. And, there are some luminous ones among the five economic reports due out tomorrow morning. Maybe they’ll contain a surprise that will finally put some life into markets.