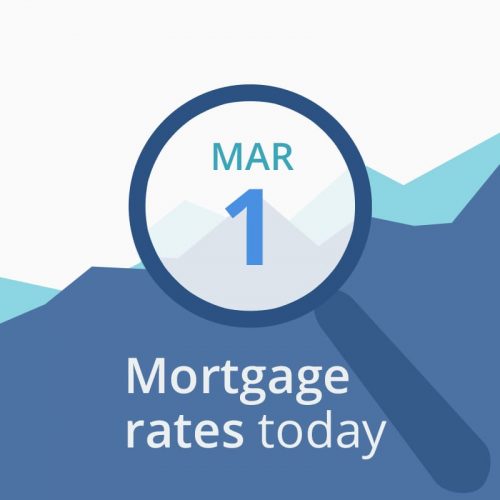 Average mortgage rates increased yesterday more sharply than they have in a couple of weeks. But it wasn’t a huge jump. Mortgage News Daily put it at 6 basis points (a basis point is one-hundredth of 1 percent), which made it February’s third biggest rise. We did forecast upward movement and warned of the scenario that might produce a “bigger increase in mortgage rates than currently looks likely.”

So does this first sign of life in markets in weeks mean we should now expect more volatility ahead than we’ve seen recently? Possibly, but it’s to early to be certain. Today suggests it might be. But we’ll have to wait a while to be sure whether yesterday was a blip or the beginning of a trend.

The data below the rate table are mostly indicative of moderately higher rates in the short-term.

Unless something big intervenes during the day, it looks likely mortgage rates will be higher this evening.

Better-than-expected economic news triggered yesterday’s rise in mortgage rates. And there might be more of the same ahead. But it’s worth remembering that there’s plenty of potential for bad news in today’s headlines that could send those rates back down. In particular, any escalation in tensions between India and Pakistan or a premature break up of the U.S.-China trade talks could trigger significant falls.

Still, we’re today changing our float/lock recommendation. We now suggest that you lock if you’re less than 30 days from closing.

What’s going on this morning?

This morning’s mini-avalanche of economic reports was remarkably mixed. Personal incomes were way better than expected in December but seriously disappointing in January. Consumer spending in December was bad, showing the biggest decline in nine years. Core inflation held steady and was above forecasts but was still roughly in line with Fed targets. We provide figures for today’s other two key reports below. However, those were published too near our deadline for us to assess their impacts on markets.

Overall, the earlier numbers had, by nearly 10:00 a.m. (ET), failed to blunt yesterday’s upward momentum in mortgage rates. If anything, key markets were rising faster than they did at the same time yesterday.

So, if you’re still floating, do remain vigilant. Continue to watch key markets and news cycles closely. In particular, look out for stories that might affect the performance of the American economy. As a very general rule, good news tends to push mortgage rates up, while bad drags them down.