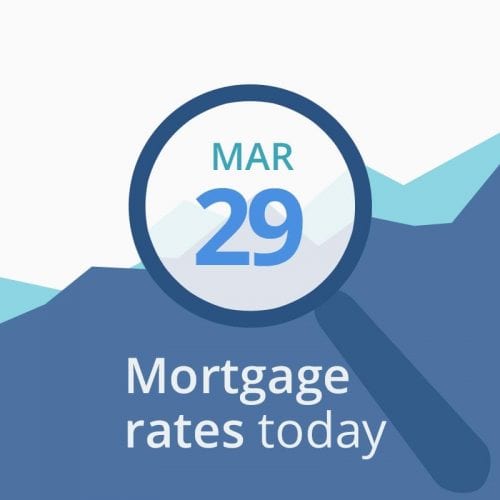 It finally happened. Average mortgage rates yesterday edged upward — for the first time since Mar. 1. The increase was small (rates are still lower than they were on Wednesday evening) but it may prove significant.

Of course, nobody yet knows whether it will be. But you need to build it into your risk calculation. So was yesterday just a blip? Or was it the start of a bigger, sustained bounce?

That won’t be clear for some days. And a key vote is taking place on Brexit (see below) in the UK parliament at about 10:30 a.m. (ET), which could change everything. But the data below the rate table are indicative of mortgage rates moving upward again today, though probably not sharply.

Rates may be in a good place right now. On Wednesday, they were at their lowest since January 2018. But will this happy situation last? It may. However, there are plenty of factors on our radar that could see them rise. And those are just as likely to materialize as ones that could create further falls.

Of course, it’s possible the Federal Reserve’s statement last Wednesday has established a long-term downward trend. But you can still expect to see rises and falls within it as other risk factors emerge and recede. And, depending on how near you are to your closing date, you may not have time to ride out any increases.

The problem is, inverted bond yields have come to be seen as harbingers of economic gloom. Earlier this week, CNBC noted: “The U.S. Treasury yield curve has inverted before each recession in the past 50 years and has only offered a false signal just once in that time, according to data from Reuters.”

And, on Wednesday, CNBC ran a different article under the headline, “The bond market has been spooked and so the big interest rate slide is likely not over.” Let’s hope that turns out to be correct and that yesterday was just a blip.

This concerns Brexit, the manner in which Britain leaves the European Union (EU), if at all.  The UK seems as far away from deciding what it wants from quitting as it was more than 1,000 days ago when the leave/remain referendum was held. And that’s bad because it was due to leave today. Last week, the EU granted an extension until April 12.

If Parliament enacts the Prime Minister’s preferred withdrawal agreement by this evening, a further extension into May will automatically kick in to smooth the necessary administrative processes. If Parliament declines to pass that deal later this morning (it has already rejected it twice by large majorities), markets might put some downward pressure on mortgage rates. If the government loses today’s vote, the UK will have to settle on one of two choices.

First, it can crash out without any agreement and hope to trade under World Trade Organization rules. This is the so-called no-deal option. Nearly all economists and most businesspeople think that would be a monumental folly that would cause immeasurable economic self-harm. Or, secondly, it can request a much longer extension (maybe two years) during which it can negotiate a new withdrawal agreement, or hold a second referendum or general election to break the political deadlock.

If British politicians eventually find a sensible way forward, that would be good news for the global economy and might see mortgage rates rise. However, if the country crashes out of the EU with no deal (still a possibility) in two weeks, mortgage rates could dip even further.

Meanwhile, markets are increasingly focused on current U.S.-China trade talks. U.S. Treasury Secretary Steven Mnuchin and Trade Representative Robert Lighthizer arrived in China yesterday to put final touches to an agreement. And a similarly high-level Chinese delegation is expected in Washington D.C. sometime next week, which is the first time a text might be unveiled. However, one expert told CNBC on Tuesday that he didn’t expect to see a draft before May or June.

Still, the administration continues to be generally upbeat about progress. However, others see potential problems. The President’s original Mar. 1 deadline for an agreement passed four weeks ago.  But both sides badly need a good outcome, and for similar reasons: First, to burnish political prestige domestically by bringing home a win. And secondly, to step back from economic slowdowns.

Last Wednesday’s Fed announcements will likely add some downward pressure on mortgage rates in coming months. That doesn’t mean there aren’t other risks (currently known and unknown) that could see them rise, possibly sharply. And yesterday’s rise creates new grounds for caution. So we’re changing our recommendation again today to suggest that you lock if you’re less than 30 days from closing. Of course, financially conservative borrowers might want to lock soon, whenever they’re due to close. On the other hand, risk takers might prefer to bide their time.

After a couple of light weeks for reports of economic data, we see more action this week. And some of the numbers, including yesterday’s gross domestic product (GDP) and today’s core inflation, are top-tier indicators that markets take extremely seriously. Others to watch include personal incomes and consumer spending, also today.

This morning’s core inflation headline number was very close to expectations, and personal income and consumer spending figures were only mildly disappointing. New home sales and the consumer sentiment index were somewhat better than expected.

Markets tend to price in analysts’ consensus forecasts (we use those reported by MarketWatch or Bain) in advance of the publication of reports. So it’s usually the difference between the actual reported numbers and the forecast that has the greatest effect. That means even an extreme difference between actuals for the previous reporting period and this one can have little immediate impact, providing that difference is expected and has been factored in ahead. Although there are exceptions, you can usually expect downward pressure on mortgage rates from worse-than-expected figures and upwards on better ones.