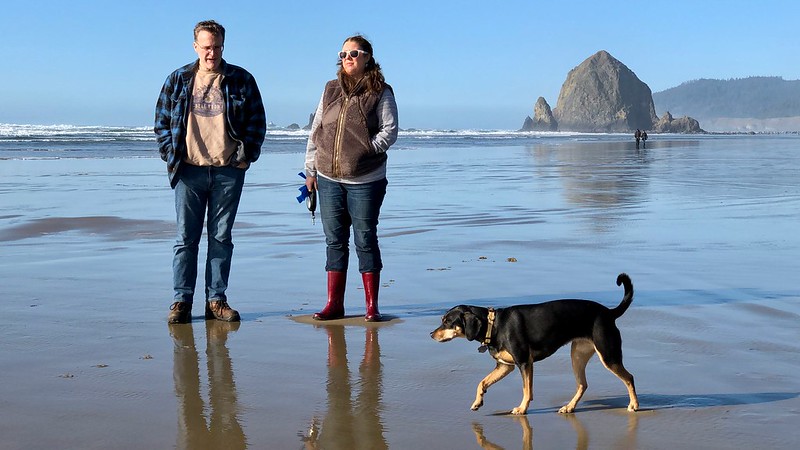 My cousin Duane carpooled with us to and from the beach. We rode in Kim’s car: a 1997 Honda Accord that’s showing signs of its age.

“It’s a little warm in here,” Duane said about ten minutes into our drive. “Would you mind turning down the heat?”

“Well, I can’t turn down the air,” Kim said. “It’s stuck on high. But I can turn down the temperature.” She laughed as she demonstrated that the knob for the air volume has broken off at the post. The vents now permanently blow at full force.

“This car is falling to pieces,” I said. “Literally.” As if to prove my point, a bit of molding fell from a roof handle. I picked it up and wedged it back into place.

“I like my car,” Kim said. “I have an emotional attachment to it. But I’ve come to the realization that it’s time to start searching for something else.”

More and more, it looks like our vehicles have reached the end of the road.

The End of the Road

Kim bought her car 22 years ago at a model-year closeout sale. It’s lived with her in Minnesota, Arizona, California, Idaho, Washington, and Oregon. In that time, the Accord has logged nearly 250,000 miles and never given her any major problems. 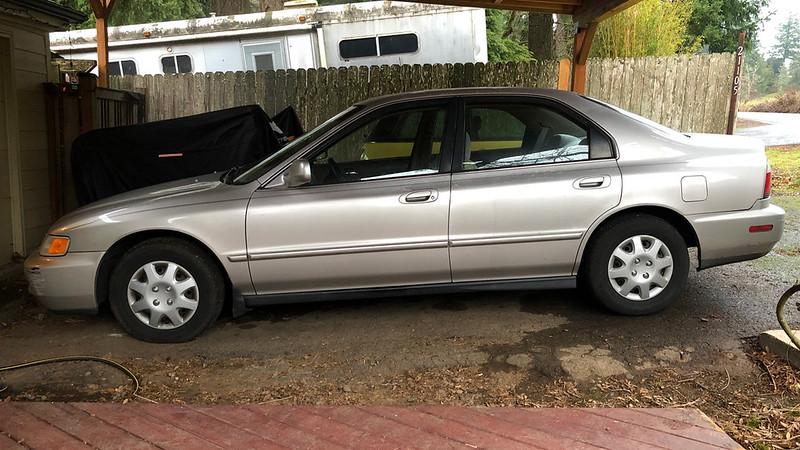 For a decade, I’ve been driving the 2004 Mini Cooper I bought as my first exercise in saving after I paid off my debt. In the ten years I’ve had it, I’ve put 90,000 miles on my Mini (bringing its total mileage to 150,000). We even took the Mini with us on our 15-month cross-country RV adventure! 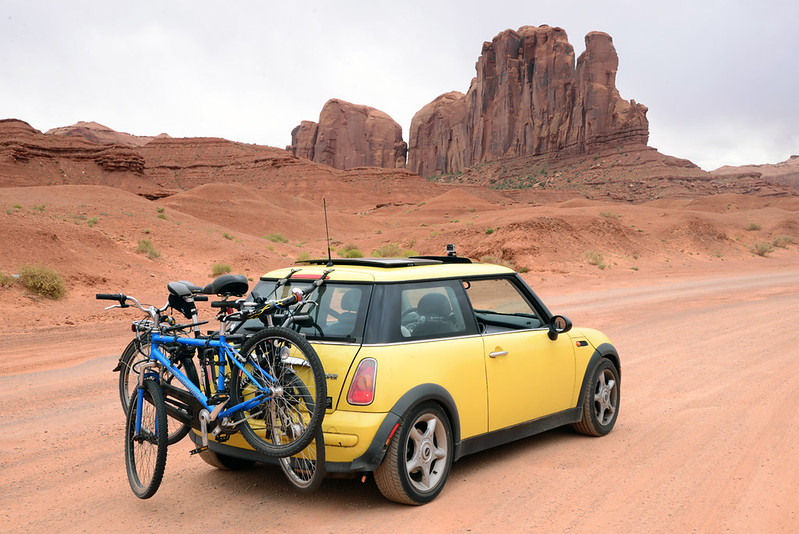 Until the past couple of years, the Mini was trouble-free. During the RV trip, however, the fuel pump died. Then, when we got home, I funneled about $4000 into several repairs over a twelve-month span.

This winter, the Mini developed another problem: The sunroof began to leak (and in a big way). This isn’t good during rainy Oregon winters. In fact, it basically means my little yellow friend is unusable until things dry out.

Meanwhile, the old reliable Accord has developed an oil leak. The leak is dripping onto the fan belt. Our mechanic says Kim’s car needs about $1500 in repairs. That’s not too bad, but it’s more than the car is worth. Plus, we suspect that’s just a small taste of what’s to come.

Because I could see the writing on the wall — and because we need something to haul Big Stuff at our country cottage — I picked up a 1993 Toyota pickup at the end of 2018. I love it. (Seriously, I do. I just bought Taylor Swift’s latest album on cassette so that I can make use of the tape deck, which makes it even more fun.) 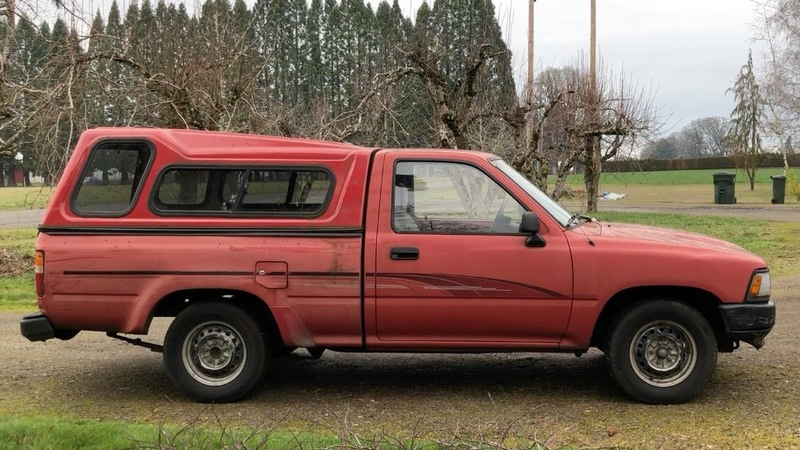 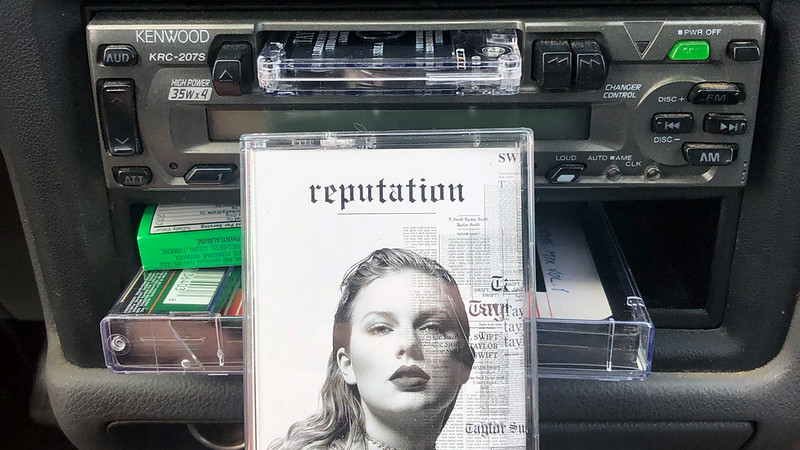 But the truck is a stop-gap measure. Kim and I feel like it’s time to pick up a newer, more reliable vehicle. Neither of us relishes this idea, but that’s where we are. Last August, I asked you folks which new car I should buy. You offered a lot of great suggestions. But by purchasing a used pickup, I’ve put my own car dilemma on hold — for a time, at least. Kim’s situation, however, seems pressing.

Fuzzy Math
I found it surprisingly difficult to decide whether or not I should buy a 1993 pickup with 211,000 miles on it. The previous owner is a friend and colleague. I trust him. He says the truck runs great. And, so far, it does. But it’s 25 years old! I worry.

On the other hand, I just bought brand-new 45,000-mile tires for the truck, so maybe I’m hoping it’ll last me for several years!

Before the Accord started showing its age, Kim’s plan had been to sell the car to a couple of young women we know. They’re in the process of getting their driver licenses and will soon be looking for a cheap car. We thought the Accord was perfect! Now, though, we’re not so sure. Is it really fair to sell them a car knowing it needs $1500+ in repairs? (Maybe we should just give them the car and tell them about its issues?)

Regardless what happens with her current car, we both agree that it’s time to accelerate her timeline for buying a new vehicle.

“What are your priorities for a new car,” I asked last week.

“Well, I want something that fits our lifestyle,” she said. “Apparently, we take the dog everywhere, although I doubt they make dog-specific cars. I want something that lets us haul the kayaks and the bikes. I want to be able to make long road trips comfortably. Ideally, I’d buy an electric car or a hybrid.”

“Anything else?” I asked.

“I want heated seats,” she said. “And a place to put my sunglasses and chapstick.” (If Kim could only take one thing with her to a desert island, it’d be chapstick.)

“Because our cars are so old, any reasonably new vehicle is going to seem like a massive upgrade,” I said. I’ve spent approximately thirty days in rental cars over the past year. They all seem like they’re from the future. (And my friend’s $150,000 Mercedes S550 I rode in last spring? Totally the Enterprise 1701-D!)

“What’s your budget?” I asked.

Preparing to Buy a New Car

Between us, Kim and I own three vehicles. Their average age is 21 years and their average value is maybe $1750 each. Obviously, we’re not car people. We place no value in having the latest, greatest vehicle. Neither one of us is looking forward to the car-buying process. It sounds like an ordeal, not something fun.

Fortunately, we know better than to visit dealers until we’re absolutely ready to purchase. (And truthfully, Kim is more inclined to buy a used vehicle from a private party.)

Kim had planned to put off buying a new car until sometime this summer. Now we suspect we’ll have to make the move sooner rather than later.

To that end, she’s started doing research. She asked her Facebook friends for their recommendations. I polled the people who subscribe to the weekly GRS newsletter (and received some terrific response!). Kim has been reading about different cars online. And soon — maybe next week — the annual Consumer Reports car-buying issue will land in our mailbox.

Over the past thirteen years here at Get Rich Slowly, I’ve shared many articles about the car-buying process. Here are some of the most useful:

It’ll be interesting to see which car Kim chooses and how we end up buying it. Deep down, I know she longs for a Tesla Model 3 but at $35,000+, they’re far outside her budget. I suspect she’ll end up with a Subaru Outback or something similar.

Maybe the next time we take Duane to the coast to dig clams, we’ll ride in comfort…and actually catch some clams.

Ironic Footnote
As I was writing this article, Duane phoned me. “Can you pick me up and take me to my oncologist appointment?” he asked. “My car just died.” I spent the next three hours helping him get things sorted.

My post about our dying cars was delayed by Duane’s own dying car.

“Maybe I should buy Bob a new car,” Duane said as we waited for the tow truck to arrive. It was a morbid joke. Duane has terminal cancer. Bob is his brother. If Duane were to buy a new car, he wouldn’t have it long. It’d soon get passed along to his Bob. This adds wrinkles to his own vehicle dilemma.