Women working to achieve financial independence face an extra hurdle: the hidden cost of being female.

Though it’s cheekily referred to as the “pink tax”, the additional cost women incur for personal-care products, toys, clothing, dry cleaning, health care, mortgages, and vehicle maintenance is no joking matter. It inflates our budgets, limits our ability to save, and sometimes hinders our ability to access affordable and safe sources of credit.

Based on that semi-intense description of the pink tax, you may think it’s already been made illegal to charge someone more on the basis of their gender. But that’s not true. There’s no federal law prohibiting companies from charging different prices for products that are identical (or very similar), but which are marketed by gender. At least not currently.

Only one U.S. municipality — Miami-Dade County — has banned this practice. California enacted a similar restriction in 1995, but it applies only to the pricing of services. New York City followed in 1998.

On top of the pink tax, women still earn less than their male counterparts. The average woman is paid 82 cents for every $1 her male colleagues earn; the discrepancy is much worse for women of color.

When you’re paying more for basic goods and services from birth until death — just because you’re female — it’s easy to understand why so many women are pushing to “Ax the Pink Tax”. 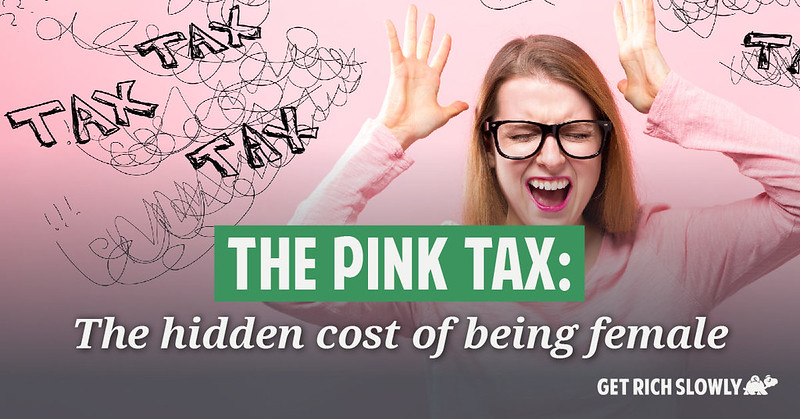 What Is the Pink Tax?

Twenty-five years ago, in 1994, the State of California studied the issue of gender-based pricing. They found women pay about $1300 more each year for the same services as men. Accounting for inflation, that figure is now closer to $2135 per year.

If that figure doesn’t shock you, maybe this will: By the time a woman turns 29 (like me), she’ll have spent an estimated $39,203 on the pink tax alone! Can you imagine how much money I could have right now if I’d put the money I spent on the pink tax in a savings account? Especially one with compounded interest!?

According to the DCA report, products for female consumers were likely to cost more across industries:

Similarly, women are financially penalized for having their menstrual cycle. The U.S. government has deemed menstrual products a “luxury item” despite the fact that menstrual cycles are a monthly reality for all women, not a “luxury”.

For comparison: Prescription and non-prescription drugs and medical supplies are exempt from sales tax. This includes aspirin, DayQuil, ChapStick, gauze, Viagra, and condoms.

But all hell breaks loose if an end to the tampon tax is proposed – even though a study published by the American College of Obstetricians and Gynecologists found that two out of three low-income women in the U.S. couldn’t afford menstrual products at least once each year. The study also found that tax breaks on tampons are extremely beneficial for low-income women.

Despite this growing body of research that it costs way more to live as a woman than a man, proposals to eliminate tampon taxes or other pink taxes don’t get very far.

In New York, where a tax on menstrual products was eliminated, the state has recorded a $14 million loss in tax revenue as a result. In California, former Gov. Jerry Brown vetoed a bill in 2016 that would have eliminated the state’s tampon tax for fear that the state would lose $20 million in annual taxes.

The Pink Tax in Action

What does the pink tax look like in action?

Until, that is, the DCA study came out.

When questioned about the price difference between the two Radio Flyer scooters, Target referred to the extra $25 cost of the pink scooter as a “system error”. The retailer now sells both scooters for $29.99.

Even children’s short-sleeved uniform t-shirts showed a gender price difference, with boys’ tops retailing for $10.95, while girls’ tops retailed for $12.95. Anyone have a clue why the girl version costs $2 extra?

The gender-based price difference is even more blatant when it comes to adult clothing.

Women’s clothing costs more than men’s clothing in six of seven categories! The only category where men pay more than women is underwear – men typically pay $2.44 more for underwear than women. However, women are paying more than a $2.44 difference when it comes to dress pants, dress shirts, sweaters, jeans, shirts, and socks. 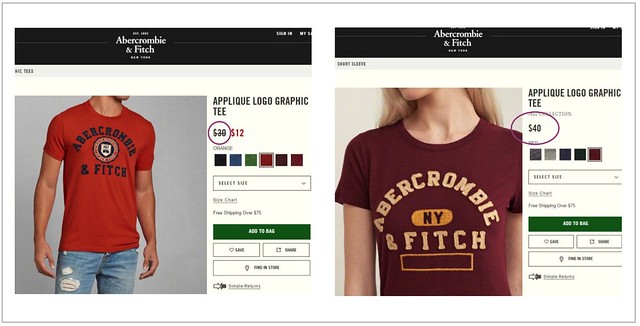 It’s not just retailers though that pass along costs onto female consumers, for really no other reason than to boost their own bottom line. It’s also service providers like dry cleaners and car repair shops that are guilty of charging women more than men.

Suzanne McGee knows all too well the additional cost that’s incurred when a female goes to the dry cleaners. “I’ve been hit with the pink tax again,” she wrote in a column for The Guardian. “I knew it was coming; I should have been prepared with better arguments. But I couldn’t avoid it…I ended up getting charged $7 for cleaning my ‘female’ shirt and not the $3.25 a man would have been charged.”

To prove her theory, McGee had a male friend return to the dry cleaner with an identical shirt to see how much he would be charged to have the same plain, cotton, long-sleeved shirt dry cleaned. McGee’s male friend was charged just $3.25, while McGee had been charged $7 to dry-clean the same top.

While it’s illegal for your gender to play a role in determining your mortgage rate, there’s a slew of studies showing women pay higher mortgage rates than men in relation to their risk of defaulting.

According to a report in the Los Angeles Times, because income was once a determining factor in one’s ability to obtain credit, women were often denied as a result of earning less than men.

A similar trend was found in the small loans market. Studies found that women were rejected more than men when applying for loans. When women were approved, they were given smaller loans, but because so many women feared being rejected, most didn’t apply for loans in the first place, the Times reported.

A similar occurrence happens in the auto industry.

It sounds cliché, but a study from Northwestern found that women who acted uninformed when asking about having a radiator replaced were charged more. Women were quoted at $406 for a service that should cost around $365. Men who acted unfamiliar with the repair, just as the women had done, were quoted $383 for the same service, the study found.

No Evidence of Discrimination?

In 2015, New York officials concluded that because the pink tax is largely unavoidable, it’s a “greater financial burden for female consumers than for male consumer”.

Consumers don’t control the textiles or ingredients used in the products marketed to them, the DCA report noted. Additionally, consumers can only make purchasing decisions based on what’s available in the marketplace.

However, a report from the Government Accountability Office (GAO) concluded differently.

Because there isn’t a law preventing companies from charging different prices for men and women’s versions of products, and companies have a legal right and responsibility to maximize profits, the GAO couldn’t conclude the gender price disparity was unfair.

The GAO even argued that “it’s up to consumers to understand any price differences”.

I may have been able to let that ill-informed conclusion slide if they hadn’t added this part: Concerns about gender discrimination were not studied due to “very few complaints”.

Until the gender pay gap and gender tax are eliminated, is there anything we can do to try to level the playing field economically?

The other thing we can do is use our voices on social media especially to speak up.

When you’re shopping, check to see if there’s a price difference between the women’s and men’s versions. If there is, look to see if the size and ingredients are comparable. If they’re the same, take a picture of both products and use the hashtag #AxThePinkTax.

Some companies who’ve become aware of the price discrepancies of their own products have made changes to level the economic playing field.

Curious is one word to describe Katie Utterback, a former investigative reporter, who fashioned a microphone from cardboard at a young age and perused her neighborhood with a hand-held camcorder looking for stories to share with the world. Katie now uses her writing skills to further improve financial literacy in the Greater San Diego area, while sharing insights from her own debt-free journey at DebtWave Credit Counseling.