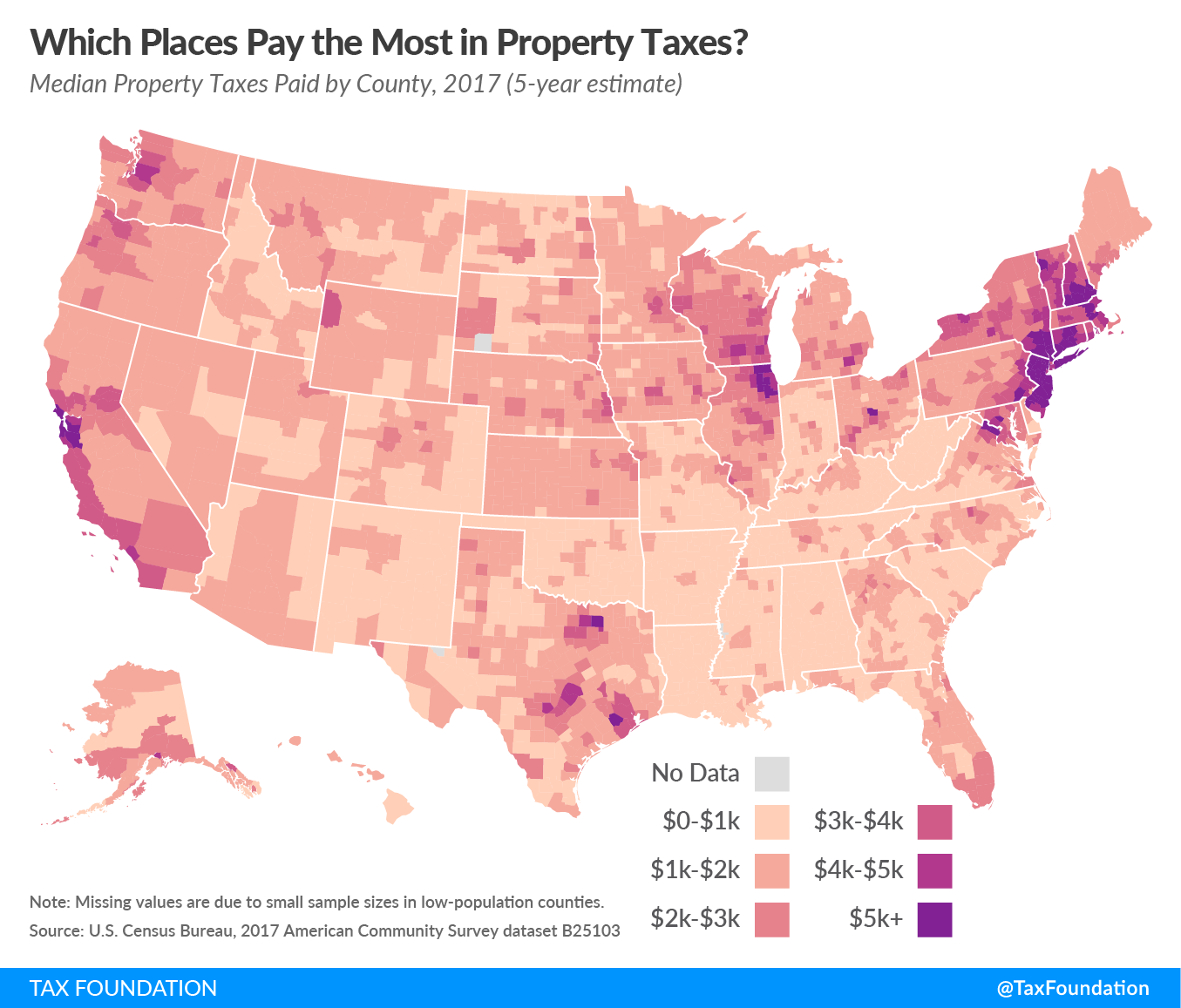 Median property taxes paid vary widely among the 50 states. The lowest bills in the country are in 13 counties with median property taxes of less than $200 a year. This group is made up of three counties in Alaska (Aleutians East Borough, Kusivlak Census Area, and Southeast Fairbanks Census Area), seven parishes in Louisiana (Allen, Avoyelles, Bienville, East Feliciana, Madison, Red River, and Winn), Alabama’s Choctaw County, New Mexico’s Harding County, and Kenedy County in Texas. The next-lowest median property tax is $215 in Lamar County, Alabama, near the Mississippi border and about halfway up the state.

The five counties with the highest median property tax payments all have bills exceeding $10,000— Bergen and Essex Counties in New Jersey, and Nassau, Rockland, and Westchester Counties in New York. All five of these counties are located near New York City.

Which Places Pay the Most in Property Taxes?

Note: Missing values are due to small sample sizes in low-population counties.

The above map is interactive — hover the mouse over a given county to see the median amount of property tax residents there pay. Click here to see a larger version.

Reliance on property taxes varies among states, but also within states. In Georgia, for example, where the median property tax bill is relatively low, median taxes range from $506 in Treutlen County (in the middle of the state) to $2,761 in Fulton County (a suburb of Atlanta). This is typical among states—higher median payments tend to be concentrated in urban areas. This can be partially explained by the prevalence of above-average home prices in urban cities. Because property taxes are assessed as a percentage of home values, it follows that higher property taxes are paid in places with higher housing prices.

While no taxpayers in high-tax jurisdictions are going to be celebrating their yearly payments, it’s worth noting that property taxes are largely rooted in the “benefit principle” of government finance: the people paying the bills are most often the ones benefiting from the services.

[1] Census 2016 State and Local Government Finances by Level of Government and by State.