As we think about tax policy proposals designed to target specific or narrow groups of individuals, it’s important to understand who shoulders the burden of income taxes under the current system. The federal income tax system is already progressive, with high-income taxpayers paying a larger share of the tax burden under higher average tax rates than lower- and middle-income taxpayers.

Data from the Internal Revenue Service (IRS) shows us who pays federal income taxes. As illustrated below, higher-income taxpayers are responsible for paying a significantly higher share of the tax, and this trend has increased over the past three decades. For instance, in 2016, the top 1 percent of taxpayers paid about 37 percent of federal income taxes, more than twelve times the tax burden of the bottom half of taxpayers. 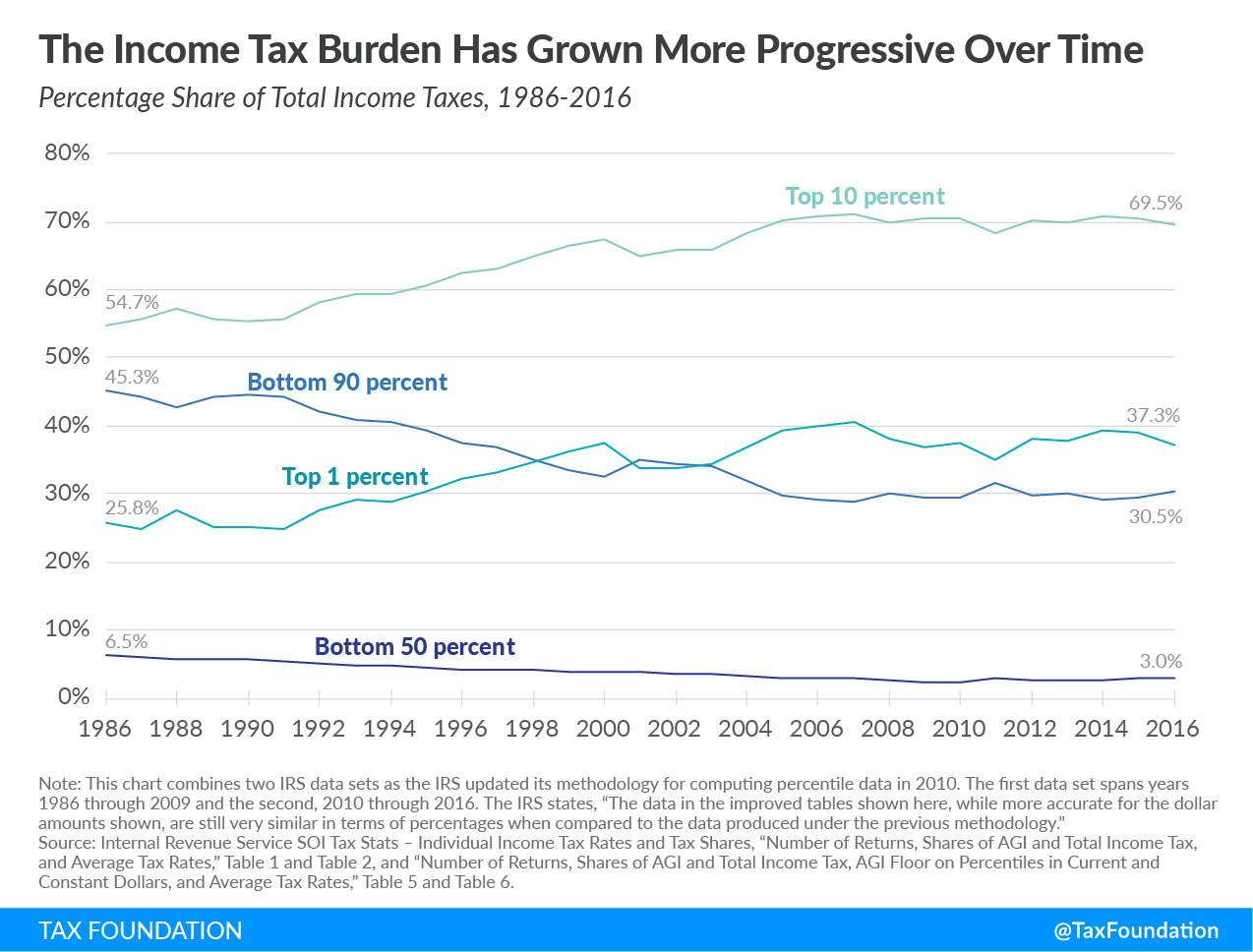 Average tax rates, which are income tax liabilities divided by income, are another way to illustrate the current tax system. Using IRS data, we see that the top 1 percent of taxpayers paid a rate much higher than the average taxpayer, while the remaining 99 percent of taxpayers paid below the average rate. The top 1 percent paid an average federal income tax rate that was nearly 2.5 times higher than the rate paid by all other taxpayers. 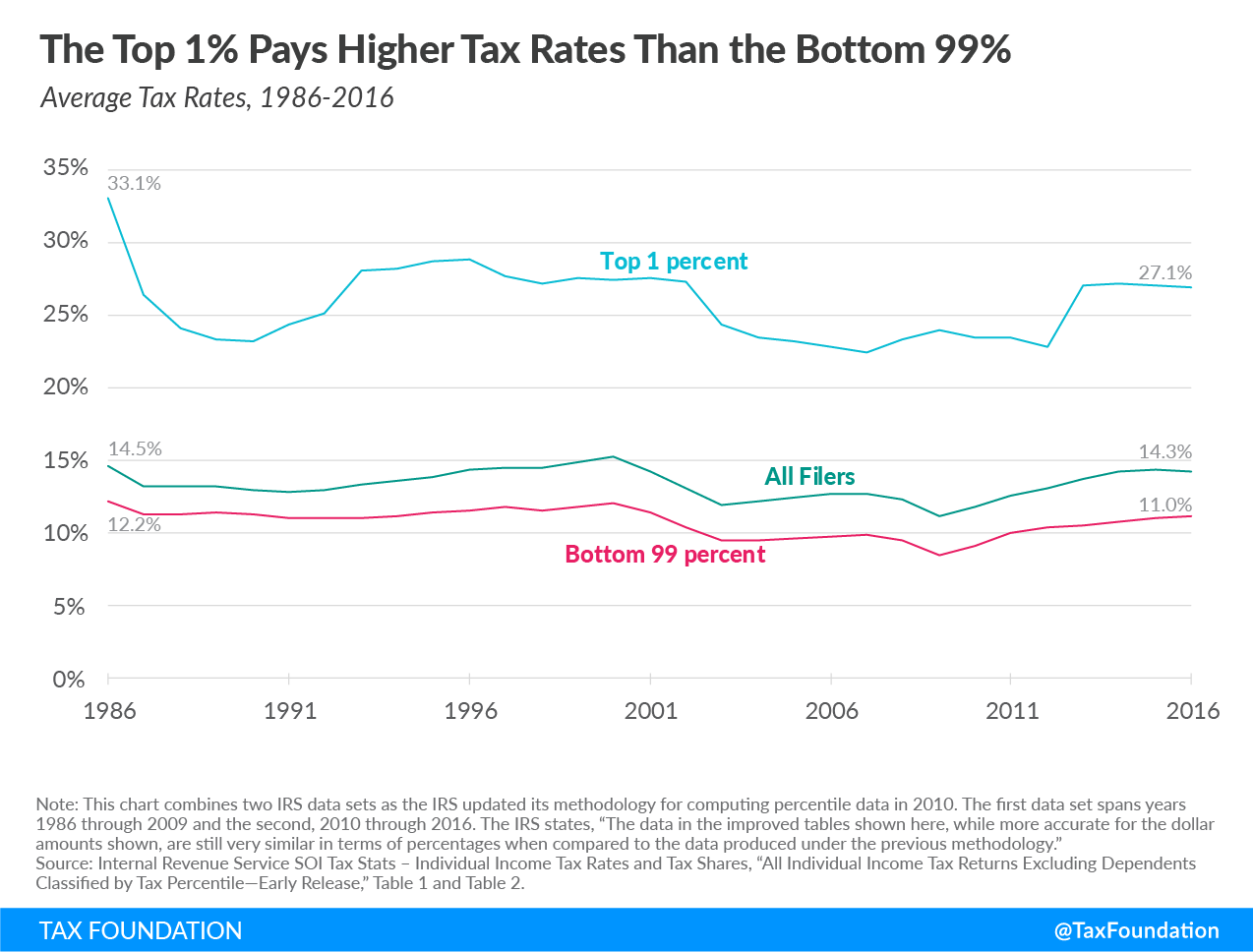 The current tax system also contains a variety of deductions, exclusions, and tax credits, which people can mistakenly believe only benefit the wealthy. Using data from the Joint Committee on Taxation, we can look at average tax rates and see that the progressivity of the tax system remains even after accounting for deductions and credits. In fact, many of these provisions result in lower-income households having zero or even negative tax liability because they receive refundable credits from the IRS. 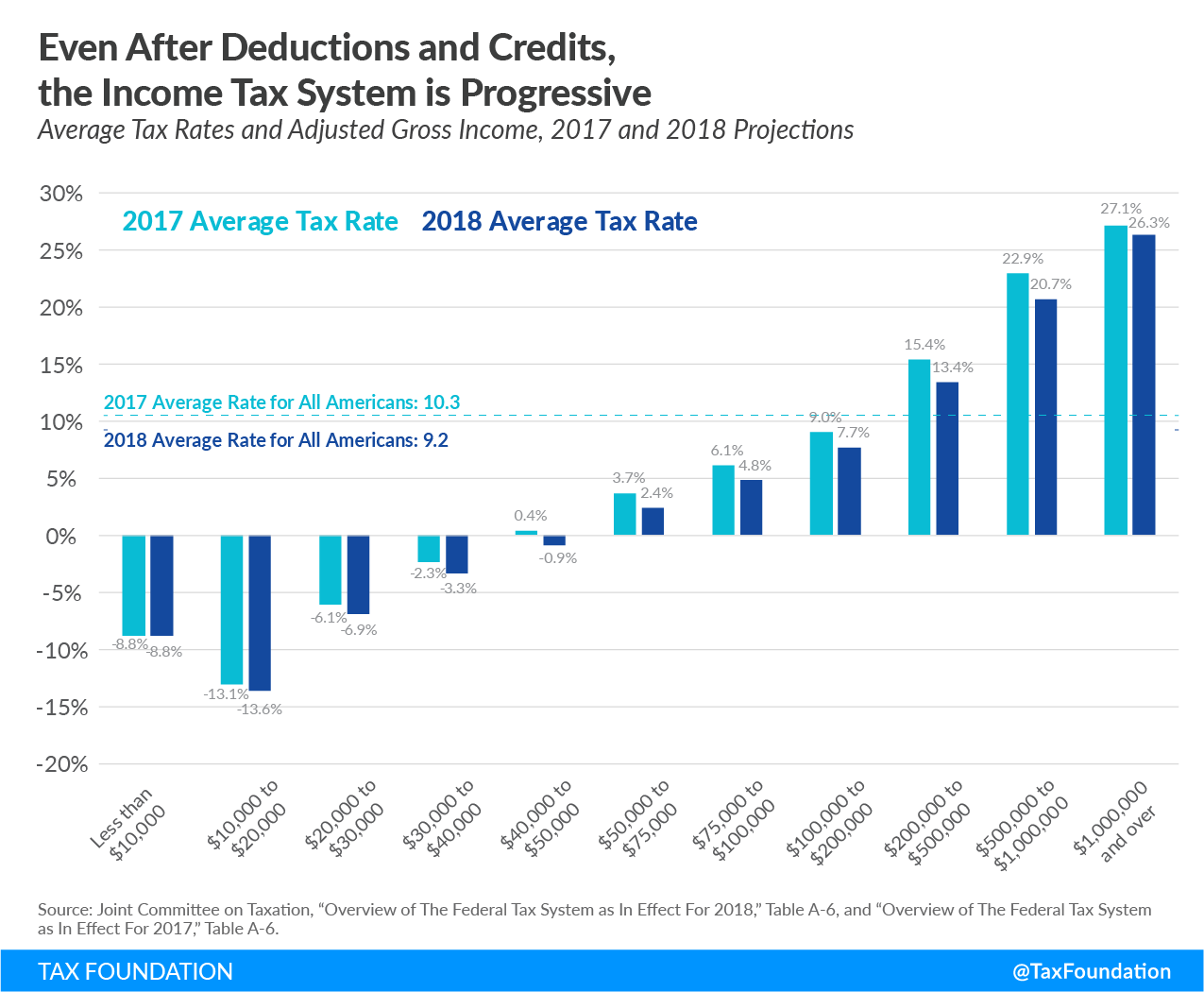 In 2017, the projected average tax rate for all taxpayers was 10.3 percent, and this was projected to decrease to 9.2 percent for 2018. This decrease is largely due to the Tax Cuts and Jobs Act, under which 80 percent of filers will see a lower tax liability in 2018, with another 15 percent having no material change. Notably, the Joint Committee on Taxation projects that average tax rates will decrease across the income spectrum—not a single income group is projected to see an average tax increase. Taxpayers with adjusted gross incomes of $50,000 and below are projected to have a negative tax liability on average in 2018.

Tax policy proposals should be supported by a thorough understanding of the tax system, both as it exists today and has in the past. Proposals that would move away from today’s broad-based, low-rate income tax system toward further raising taxes on narrow bases of high-income taxpayers fall short of sound tax policy. It is essential to consider what these charts reflect: the current federal tax system is already progressive and higher-income taxpayers shoulder a majority of the tax burden and pay considerably higher average tax rates than that of lower- and middle-income individuals.

Note: This is part of a blog series called “Putting a Face on America’s Tax Returns”