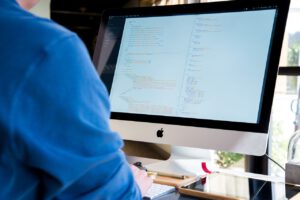 Software development has been around for a very long time, and as such, it has gone through tremendous changes.

During the era where the internet wasn’t so globally available, people had to physically buy floppy disks, and eventually CD’s with the pre-installed software on them so they can transfer them to their local devices, or at the time, computers.

Due to the limitations of the time, development teams had to initially fully code all of the blocks that construct an application, and only after they’re done pass it through to the testing team.

In other words, the approach was linear and would require the tasks to be completed in sequential order.

This would, in turn, mean that a stage must be completed before a new one begins, and it would usually lead to high costs, headaches, a higher level of difficulty, tons of bottlenecks and lack of transparency about the entire process.

The biggest downside, however, is the fact that making adjustments such as bug fixes, updates, and smaller changes can be difficult and take a long period of time, especially when you’re working under a deadline.

This also meant that the product could not be pushed to market quickly, as it would have to include everything from day one, which put a lot of pressure on developers.

At the turn of the century, and as the early 2000s began, the world started to reshape itself.

As the internet started to become more easily and regularly available to everyone, people started using apps differently, and developers took note.

It was a lot more convenient to download an app online and install it, instead of going through the process of physically visiting a store, buying the software, driving back home, putting it in a disc tray, and installing it.

This meant that they could push constant updates to their pre-existing apps, allowing for new features, security improvements and design changes, and this would be the foundation of what DevOps would eventually become.

The Rise of the Smartphone Era

It is no secret that smartphones existed since the early 90s, with the first one being developed by IBM, but when Apple took the stage with the first iPhone, they revolutionized the idea of what a smartphone could be.

The hardware itself existed, but no one quite made it as convenient and as quickly accessible as Apple did.

This meant that the entire shift of the way apps needed to go to market would change, and users wanted quick and convenient apps that could be used on their smartphones, this, in turn, made the traditional development path extremely slow and impractical.

Today, almost everything is available at the tip of your fingers on your smartphone.

Small, easily downloadable and accessible apps offer tons of functionality and generate tons more revenue for the companies that created and published them through in-app purchases and advertisements.

The Role Of DevOps

It is by far one of the best and fastest ways for a company to generate revenue if done right.

This way the software development process is much quicker and shameless, giving everyone enough time to do everything properly. It provides continuous integration and continuous delivery of value to the end-users of the software.

DevOps, in its core, can accelerate the process of delivering applications and software in general at a much higher speed.

This means that the app can release quicker, and receive constant updates and support quicker.

DevOps provides rapid yet reliable software delivery and increases the business value to customers in an efficient way.

It offers an improved deployment frequency, achieves faster time to market, shortens the lead-time between fixes and improves time to recovery as it even reduces the failure rate of new releases.

DevOps provides several benefits when it comes to the development of apps and software packages which include:

Collaboration and communication play an important role in DevOps. It can lead to automatic improvement and progress in the development cycles.

DevOps helps companies meet compliance, regulations and maintain a competitive advantage due to the smaller development windows necessary to push a product to market.

The online marketplace and requirements change on a daily basis, so keeping up to date is extremely important, and through this approach, companies can enable continuous and uniform software deployment.

What Skills Do DevOps Engineers Need to Know?

Within the DevOps field, new technologies and tools are constantly being developed.

DevOps professionals should always keep up to date and have a broad understanding of the new technologies and tools.

Some of the key things that DevOps engineers need to know include:

With this knowledge, a DevOps engineer can:

Manage Development Cycles and learn exactly how your automated deployment pipeline is performing as well as monitor how frequently the code is changed.

Find vulnerabilities in the program, as having a system or a person that can identify vulnerabilities is essential before a product moves to production as leaving these loopholes behind could hurt the app long-term.

Manage the deployment process, because if deployment were to fail, you will need a tool to inform the team behind the development process, and integration servers come with the ability to notify people automatically.

To summarize, software development used to be a tedious process.

Companies would have to fully develop software before pushing it to market, and any bugs that were not covered along the way were just asking to be exploited by the end-users, as software updates were not as common.

Teams would need a lot more time to develop software before pushing it to market, and as such, the pressure was higher.

Through DevOps and the evolution of the way we receive information today, developers aren’t limited by the software they initially develop.

They can code snippets of code chunks at a time, test them, and push them to market, with the benefit of constantly upgrading them, without as much worry.

To increase the communication levels between teams, and to easily implement DevOps into the work-flow of your teams, you can use the different services and through them, gain easy access to effective communication tools such as cloud-based telephony or hosted PBX.

Teams can constantly resolve bugs and push forward new features based on user feedback, and generally feel much more comfortable working due to the benefit of constant communications between other teams within a given company.

DevOps has truly revolutionized the way we perceive and develop software and is definitely here to stay.

The post How DevOps Has Impacted Development - A Look at the Before and After appeared first on ValueWalk.