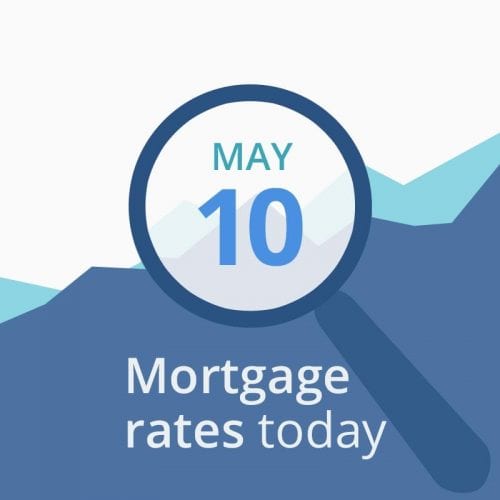 Average mortgage rates edged down yesterday, as we predicted. That puts them back to where they were on Monday evening: adjacent to their lowest level in a month. Many commentators would urge you to take your gains and lock your rate right away. Because today has the potential to be volatile.

But you can see that two ways. On the one hand, you may prefer to gamble and wait over the weekend. Trade talks with China have reached a crisis point. If those talks break down completely and a heightened trade war begins later today, then rates may have further to fall. On the other hand, if China caves or stalls and that war is averted, there could be sharp rises. Do you want to lay that bet? To keep up with this read our “China talks” section, below.

The data below the rate table are indicative of mortgage rates edging down or holding steady today. But with the scene set for a day of high drama, almost anything could happen.

First thing this morning, markets looked set to deliver slightly lower or unchanged mortgage rates today. By approaching 10:00 a.m. (ET), the data, compared with this time on Friday, were:

If nothing changes in coming hours, today might be a quiet one for mortgage rates. How likely is it nothing will change?

At 12:01 a.m. (ET) this morning, the U.S. imposed new tariffs on many Chinese imports and hiked some existing ones. This was intended to pile pressure on China’s trade delegation, currently engaged in talks in Washington D.C. In response, China has already said it will retaliate with “necessary countermeasures,” which means it plans to raise its tariffs on U.S. goods. However, President Trump this morning tweeted, “Talks with China continue in a very congenial manner – there is absolutely no need to rush …”

And the new tariffs and tariff rates imposed overnight do come with a built-in grace period. They apply only to goods that are yet to leave China, not those in transit. So they won’t begin to be collected for a while — perhaps a couple of weeks. And that may give sufficient breathing space for both sides to find common ground before any real pain is felt.

The Trump administration’s play may be seen as a high-stakes move that could bring either a swift and successful agreement — or a complete breakdown in the talks. However, if it fails, there could be very real consequences for the American economy. Wednesday’s New York Times quoted forecasts from Moody’s Analytics that the failure of these talks would “subtract 1.8 percentage points from G.D.P. growth and cause unemployment to rise.”

By 10:00 a.m. (ET) this morning, markets had reacted much less sharply to recent news than you might have expected. At one point, the Dow was down 150 points, but that’s not extreme.

It was fear of those consequences that triggered Monday’s sharp fall in average mortgage rates. However, they’ve barely budged since then. And that’s surprising. Mortgage rates are usually heavily influenced by certain other markets (we list most of them, above) and would normally have fallen further on Tuesday and Wednesday. This writer’s yet to hear a complete and convincing reason for why they didn’t. If and when he does, you’ll be the first to know.

In the meantime, here are a couple of likely scenarios. If the talks appear to be getting back on track, markets could respond by pushing mortgage rates higher. With luck, the same mechanism that recently stopped them falling as sharply as expected will prevent extreme rises. But you probably shouldn’t bank on that. Of course, if the talks fall apart completely, that would normally trigger further significant falls.

Risks from a future recession

Of course, a recession couldn’t, by definition, arise before you close. But the more investors suspect there’s one on the horizon, the lower mortgage rates are likely to go.

Last Friday’s better-than-expected employment data followed the previous Friday’s better-than-expected GDP figures. And, between the two, there had been other generally positive reports, including one about productivity. You might normally have expected those to generate higher mortgage rates. At other times, they might even have created a clear upward trend. But not now.

Some of this may be down to investors reading beyond the headline figures in economic reports. For example, NASDAQ’s Weekly Economic Release Summary, published last Friday, said, “… the GDP internals were weak even though the reported overall number was strong.” But some of it may be down to underlying skepticism over the sustainability of growth based on a one-time, massive tax cut.

So, for now, markets seem unable to make up their minds what the future holds. If and when they do, mortgage rates could rise (on optimism) or fall (on pessimism).

Last Wednesday’s Fed announcement didn’t move policy on from that declared after March’s meeting. That was doveish and ruled out further rate hikes this year. And it will likely continue to add some downward pressure on mortgage rates in coming months. As we’ve seen in recent weeks, that doesn’t mean there aren’t other risks (currently known and unknown) that could see them rise, possibly sharply. We suggest that you lock if you’re less than 30 days from closing.

After last week’s feast of economic data, this week sees a famine. It was possible today’s consumer price index (CPI) report might have moved markets. But the numbers were unexceptional. And, anyway, markets remain somewhat preoccupied with China.

Of course, it remains true that any economic report can cause waves if it contains sufficiently shocking data. But probably not this week.

That was a much lighter schedule than most weeks contain.