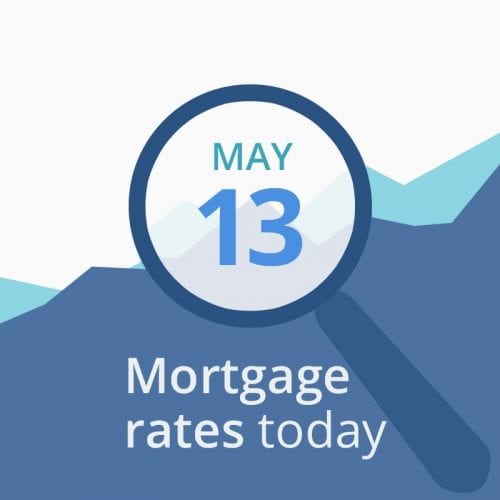 Average mortgage rates edged up moderately on Friday. Well, we did warn you that “almost anything could happen!” Of course, Monday’s big fall set the scene for last week, and rates ended a little lower last Friday than one week earlier.

Trade talks with China seemed to end with a whimper rather than a bang on Friday, with the White House painting rosy pictures of their future prospects.  But things aren’t off to a good start, with China this morning unveiling new, retaliatory tariffs on U.S. goods worth $60 billion from June 1. Those tariff rates will top out at 25 percent.

The data below the rate table are indicative of mortgage rates falling today. But, as we’ve seen recently, key markets are not playing as nicely (or as predictably) as they usually do.

If nothing changes in coming hours, today might be a good one for mortgage rates.

In the absence of dramatic events in the future, we will probably soon discontinue these sections dedicated to the U.S.-China trade talks. In the short term, there seems little prospect of fresh news from those that might affect markets. Indeed, they may for a while soon be stuck in a holding pattern.

But not yet. Markets seemed surprised by China’s announcement this morning of retaliatory tariffs, even though they had been clearly signaled on Friday

Ten days ago, after a year of negotiations, the administration was hyping up the prospects of an “epic” deal. Expectations were raised of a draft agreement by last Friday. In the event, that day ended up looking more like the nadir rather than the culmination of the current round.

On Friday, the U.S. imposed new tariffs on many Chinese imports and hiked some existing ones. And China said it will retaliate with “necessary countermeasures,” which means it plans to raise tariff and non-tariff barriers against U.S. goods.

Normally, you might expect investors and analysts to react badly to such a setback. However, markets seemed willing to buy repeated reassurances from President Tump and administration officials that this was just a pause and that negotiations were simply entering a new phase. For example, President Trump on Friday morning tweeted, “Talks with China continue in a very congenial manner – there is absolutely no need to rush …” Most stock indexes closed a little higher that day — as did average mortgage rates.

This morning, markets seemed to be reacting fairly sharply to Beijing’s announcement. However, it’s much too soon to be sure whether any response will last.

The net effect is that the market should shift from worrying about this week representing a dire deadline to expecting an ongoing and nuanced process. That nuanced, ongoing process is not as good for interest rates as the panic that preceded it. That means there’s a legitimate risk that rate momentum is higher until and unless some economic or political event comes along to make a case to the contrary.

However, in the small hours of this morning, CNBC reported: “U.S. government debt prices were higher on Monday as concerns over the ongoing trade war between the U.S. and China took center stage.” That would be good news for mortgage rates, providing that momentum builds and continues. Read on to discover more about bond prices and yeilds— and how those affect mortgage rates.

But you have to ask: Why now? Didn’t markets notice what was happening (including warnings of swift retaliation on the part of the Chinese) on Friday?

It’s another relatively light week for economic reports. The two most likely to affect markets both occur on Wednesday: retail sales and industrial production.