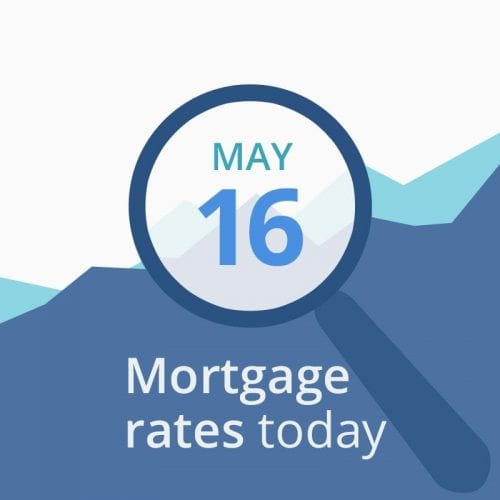 There’s little on the economic calendar today that’s likely to affect markets significantly. So any movements will probably be driven by company results, market sentiment and headlines. Watch out in particular for developments in the U.S.-China trade dispute (see below).

The data below the rate table are indicative of mortgage rates rising today. Of course, at volatile times such as these, the chances of that prediction being overtaken by events are even higher than usual.

First thing this morning, markets looked set to deliver mortgage rates that are higher today. By approaching 10:00 a.m. (ET), the data, compared with this time yesterday, were:

If nothing changes in coming hours, today might be a bad day for mortgage rates.

It’s so far unclear how President Trump’s announcement yesterday of restrictions on foreign telecom-equipment suppliers will play out in markets. Many see this as primarily a ban on Chinese company Huawei so it could be perceived as an escalation in the U.S.-China trade dispute.

Earlier in the week, President Trump was making soothing remarks about that dispute. Quoted by ABC News, he called it a “little squabble” on Tuesday. And a day earlier, he held out hope of more progress in the continuing talks, telling journalists: “We’ll let you know in three or four weeks if it’s successful,” according to NBC News.

That hope gave some welcome relief to markets around the world on Tuesday. They had a bad day on Monday as investors faced the possibility of an extended U.S.-China trade war. That has the potential to slow the entire global economy, as well as negatively affect the wealth of both participating nations.

By now, both sides presumably recognize that they’re in uncomfortable positions. However, they’ve also maneuvered themselves into situations where concessions are bound to be perceived domestically as weaknesses and failures. One possible scenario, which was floated on Monday, might provide a way forward. This sees the two leaders, Presidents Trump and Xi, take personal charge of negotiations. Between them, they should be able to construct a deal that carefully balances concessions with enough face-saving that each can sell the outcome back home as a win. A scheduled G20 summit at the end of next month would be a great opportunity to unveil such a deal. Perhaps President Trump had that event in mind when he made his promise on Monday to let journalists know “in three or four weeks” if progress is made.

Of course, there’s no guarantee the two heads of state will be successful. On Monday, CNN suggested, “A personal duel between two rival presidents could ensure that the escalating trade war across the Pacific may last longer than anyone expected.”

Until a deal or a truce is struck, the dispute is likely to be a drag on the global economy that hits America and China especially hard. And that, in turn, is likely to exert downward pressure on mortgage rates. That’s not to say they won’t sometimes move up in response to other factors. But this trade war may well set a new direction that eventually emerges as a downward trend. However, any reduction in China’s buying of American government debt would likely have the opposite effect.

Why mortgage rates have been out of synch

Last week, we promised to let you know if we heard a convincing explanation for why mortgage rates have recently drifted apart from yields on 10-year Treasury bonds. The two usually have a close relationship.

Yesterday, Mortgage News Daily (MND) offered one — together with a colorful simile. Think of that relationship as being like a dog (rates) and its master (yields). Usually, the dog trots happily alongside its owner’s heels. But sometimes it rushes ahead, pulling on the leash and trying to drag the human along. At other times, it sits obstinately and resists attempts to budge it. It’s recently been in obstinate mode.

Yes, but why? Well, MND reckons it’s “owing to some abstruse loan performance data that made investors rethink the value they were placing on mortgage investments.” In other words, those investors have been questioning whether they’re being adequately compensated for the extra risk they shoulder when they buy mortgage-backed securities rather than U.S. Treasury bonds.

It’s another relatively light week for economic reports. The two most likely to affect markets were published yesterday. While it’s true that any economic report can cause waves if it contains sufficiently shocking data, it’s unlikely any of those remaining this week will do so.