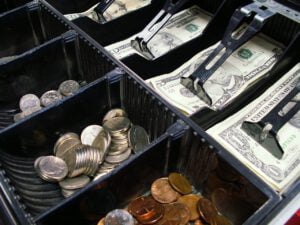 Following Friday’s deterioration, today’s bounce in stocks was crucial from a short-term perspective. With the busy political and earnings calendars in mind, today’s relatively low-volume rally might prove temporary, but it once again confirmed that investors remain eager to buy the dip thanks to the bullish long-term outlook.

The main sectors continued to diverge substantially today, with especially the afternoon session seeing strong moves “under-the-hood”. Tech stocks and communication services performed well in the second half of the day, joining the early-leaders from the energy sector, with healthcare stocks also closing clearly in the green. Cyclical issues were mixed, with financials struggling all day long, and industrials losing ground in the afternoon. Surprisingly, utilities and consumer staples, and real estate stocks lagged the broader market, despite the drop in treasury yields, as last week’s safe-haven flows reversed.

The earnings reports of the mega-cap financial firms have been a mixed bag, so far, with the third-quarter trends continuing in the sector. The traditional banking segments of the likes of Bank of America (BAC, -0.8%) and Wells Fargo (WFC +1.8%) showed weakness in the last quarter of the year as well but investment banking and trading remained highly profitable for Goldman Sachs (GS, -2.3%) and JP Morgan (JPM, -0.4%). Morgan Stanley (MS, -0.5%) and U.S. Bancorp (USB, -0.7%) will report from the sector tomorrow before the opening bell, while Procter & Gamble (PG, -0.9%) and UnitedHealth (UNH, +0.3%) will also publish their quarterly numbers.

The seven-day average of new COVID cases finally turned lower in the U.S. over the past few days, easing fears of a major post-holiday spike, like in Europe, which could have put even more pressure on the domestic economy. That said, the number of deaths hit another grim milestone, 400,000 and while the vaccination push continues to accelerate, the healthcare system will likely remain strained. In Europe, Germany extended its lockdown for another three weeks, so despite the improving U.S. situation, global economic growth could be sluggish in the coming months.

While the domestic economic calendar will be virtually empty tomorrow, the last day of President Trump’s tenure, Joe Biden’s inauguration, and the speculation regarding the new administration’s plans could lead to another active session. Investors should keep an eye on the Treasury market too as more wild swings could be ahead following today’s surprising drop in rates. The NAHB Housing Market Index will be out in pre-market trading, while the German Producer Price Index (PPI) will highlight the overnight session.

The giants of the tech sector bounced back today amid the easing fears of a regulatory crackdown in the sector and Treasury Secretary nominee Janet Yellen’s cautious words on corporate taxes. Facebook (FB, +3.9%) has been among the weakest majors of the sector this year, and despite today’s gains, it remains in a bearish short-term trend. Facebook bounced off its rising 200-day moving average today, and while it’s still below its 50-day moving average, a move above its crucial indicator could mean that the pullback is over, and the stock will soon test its all-time high from August.

The Volatility Index (VIX, -5.1%) dropped sharply today following Friday’s spike, and since a lot of investors are likely still holding hedges due to the uncertainty surrounding Joe Biden’s inauguration, the “fear gauge” could drop further in the second half of the week. The VIX closed right at its 50-day moving average today, near the 23 level, and bulls hope that even though a pullback in the major indices remains a possibility, it will soon test the key 20 level again. A move below 20 in the VIX could be an “all clear” signal for a lot of investors, and it could fuel the next leg higher in the ongoing bull market. Stay tuned!

Price action clearly improved compared to Friday’s risk-off session, especially in the tech sector, but the weakness among cyclicals and the mixed post-earnings moves still warrant caution from a short-term perspective.

Most of the key momentum indicators edged lower despite today;s bounce, but the large-cap benchmarks remain slightly overbought, and small-caps, as measured by the Russell 2000 are still extremely overbought.