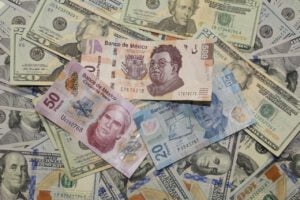 Mexico set a record in 2019 for incoming remittances, with nearly $3 billion sent into the country in March of last year—the highest ever for that month. That number was crushed in March 2020, as just over $4 billion was sent from abroad to our southern neighbor, according to data from the Bank of Mexico. That the US is among Mexico’s largest remittance sources, and with US unemployment so high and continued economic relief up for debate, begs the question: Will there be a better time to send money to Mexico in the near future?

Record-breaking remittances between the US and Mexico in March may stem from a favorable exchange rate and the fact that many immigrant workers in the US are essential workers. Mexican workers in the US are likely to work in natural resources, construction and maintenance, according to US Census data, along with jobs in the service and transportation industries. These occupations offer heavy crossover with city and state essential worker lists.

Some Mexican immigrants are earning wages during the US economic crisis and able to send money back to Mexico to support loved ones, but economic experts don’t think this trend will continue. Alberto Ramos, head of Latin America Economic Research at Goldman Sachs, said as much in a note to investors:

“We speculate that perhaps fearing a significant deterioration of the employment and income prospects in the U.S., many workers may have capitalized on a favorable USD/MXN level to send part of their accumulated savings in the U.S. back to Mexico…Despite the March upside surprise, the expected sharp recession in the U.S. and spike in unemployment are likely to negatively impact the flow of remittances to Mexico.”

How to send money if the dollar-peso relationship goes south

Pandemic aside, March and April offered strong exchange rates for sending money from the US to Mexico. But even if rates weaken, it doesn’t necessarily mean that Mexican Americans will send less money to Mexico in the coming months. In fact, Araby Smyth, a Ph.D. candidate and instructor at the University of Kentucky, believes the opposite may be true.

In an article on the topic of US–Mexico coronavirus remittances, Smyth writes:

“On March 23, Mexico began its own gradual shutdown, with the government closing schools, halting many kinds of nonessential business and requiring most people to work from home. That’s not possible for the estimated 56% of Mexicans who work as domestic laborers, in agriculture and in other informal jobs that lack social security. Their incomes have simply disappeared during the pandemic.”

With incomes in Mexico disappearing, there will be an even greater need for US-based Mexican immigrants to send money to Mexico to support friends and family during the trying times. If the peso gains strength against the dollar, it could mean fewer pesos received for every dollar sent. Although hedging options can help remitters take advantage of the situation today by locking in low exchange rates on future money transfers to Mexico.

Impact of coronavirus on Mexico’s economy

As the US attempts to flatten the curve of the coronavirus, Mexico and South American countries are seeing an increase in cases. An increase in both countries could make the lives of Mexican immigrants in the US even more stressful as their pay is cut and the need for money back home increases. In an interview on NPR in Phoenix, Arizona, Cristina, a Mexican migrant in the US who paints houses, explained that her work was cut from six days a week to three or less. On top of paying for rent, bills and groceries to feed her family, she sends between $30-50 a week to her mother in Mexico. Cristina’s mother in Guanajuato claimed the government isn’t providing relief except for “some groceries that are unfit to eat.”

“No job, no money,” said reporter Rodrigo Cervantes, translating Cristina’s mother. “Her daughter already told her that tough times are coming because of the pandemic.”

The post Can the current dollar-peso relationship favoring remittances be sustained? appeared first on ValueWalk.