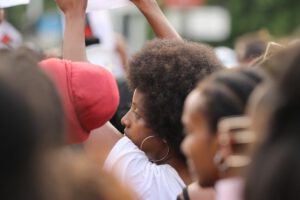 Don’t Drink When You Drive

We are a nation of laws. One of them is that if you should not drink while you’re driving. This excellent law is strictly enforced. The police and most drivers take it very seriously. Indeed, if you’re caught driving while intoxicated, there are serious consequences.

In recent years, innovative local policing in our nation’s cities has uncovered a new crime committed entirely by black men. The two most well-known offenders were Eric Garner of New York and George Floyd Jr of Minneapolis. Each committed a capital offense: breathing while black. Each was executed on the spot by vigilant police officers.

There were some remarkable similarities in their cases. Both offenders were large black men accused of committing petty crimes, and probably should not have even been arrested. Neither posed any danger to the arresting officers or to the public. And in both cases, their executions were carried out in front of sizeable groups of witnesses and even videotaped.

Eric Garner, a family man who had stopped working regularly because of health issues, managed to earn a living largely be selling “loose cigarettes” on which no tax had been paid. He was well known to the police in his Staten Island neighborhood in New York City.

They often hassled him – perhaps with good reason – until one day, when he decided to get them off his back. Three of New York’s finest wrestled him to the ground, while one of them maintained an illegal chokehold on Garner for several minutes.

Again and again, he cried out, “I can’t breathe! I can’t breathe!” But even though Garner was lying face down on the ground, the policeman did not release him from his chokehold. Finally, Garner stopped protesting. He was close to death.

George Floyd was suspected of passing a counterfeit twenty-dollar bill in a convenience store. Minutes later, when Minneapolis police officers arrived, Floyd was sitting in a parked car with a few other people.  The police handcuffed him and tried to push him into the back of their police car. He protested, saying that he was claustrophobic.

He was then wrestled to the ground by the policemen. As a crowd began to gather, Floyd was lying face down on the sidewalk. One of the police officers, Derek Chauvin, knelt with his knee on the back of Floyd’s neck, while two of the others held him down. Floyd cried out again and again, “I can’t breathe! I can’t breathe!”

Chauvin kept his knee on George Floyd’s neck for eight minutes and forty-six seconds. Toward the end of this period, Floyd fell silent. By the time the medics arrived, he was probably already dead.

By coincidence, it was later learned that George Floyd and Derek Chauvin who murdered him, had both worked at the same local music club for several years. Floyd worked inside the club with perhaps a dozen other security guards, while Derek Chauvin provided outside security with other off-duty police officers. Sounds like club was quite a busy place to need that many people providing security.

It is currently under investigation whether the murdered man and his murderer had previously known each other. Perhaps, like Eric Garner, George Floyd had previously met his killer.

Every day there are hundreds of peaceful demonstrations all over the nation sponsored or inspired by the advocacy group, Black Lives Matter.” Predictably, some white bystanders ask – whether in wonderment or sarcasm – “Why not all lives matter?” Or, “Don’t white lives matter?”

At least on the surface, or from a strictly logical position, these are not unreasonable questions. I happen to be a numbers person, so here’s my argument for why it’s long since time that all Americans understood why specifically black lives do matter, and why our criminal justice system needs to be color-blind.

African Americans are more than six time more likely than whites to be sentenced to prison for identical crimes. Does that sound like color blind justice?

One out of three young black men are in prison, on parole, or on probation. But within urban ghettos, this fraction is closer to one half.

Much of white America is finally waking up to a truth that blacks have known for over four centuries: Since they first arrived in chains, the deck has been stacked against them. What is especially significant about all these demonstrations is the number of while people participating. Like Bernie Sanders has long proclaimed, “Enough is enough!”

Full disclosure: I take part in several of these demonstrations every week. Please join us!