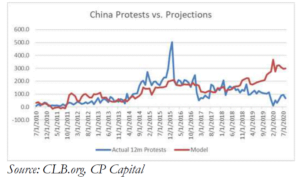 We still believe rates and the USD have upside while precious metals should stall and base before going much higher.

For the past year and a half, we have been commenting that we were expecting protests in China to pick up as food inflation soared and the economy slowed. Using these two inputs, along with seasonality (no one likes to protest during typhoon season), we had a decent multi-regression of protests vs. actual protests. 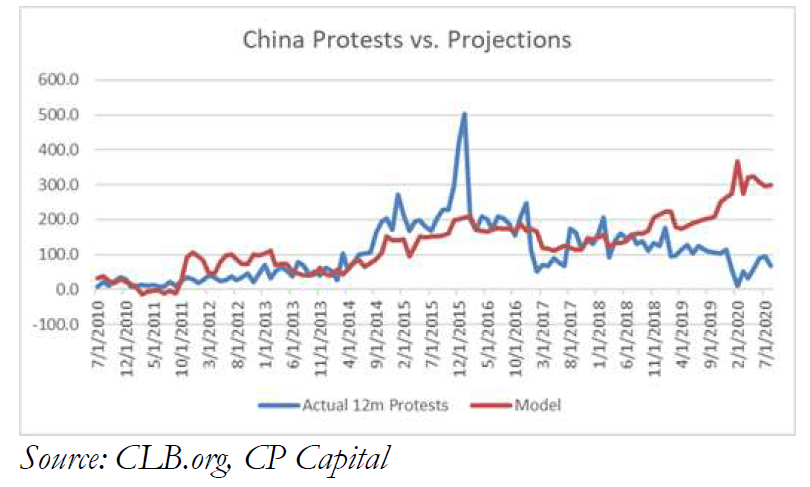 Looking at growth, we can see that Chinese PMI’s were steadily below 50 for the SH of 2018, most of 2019 and it remains to be seen whether 2020 averages above 50. Recall that anything above 50 indicates expansion. Below are monthly Chinese PMI’s.

High food inflation and economic contraction hitherto would have suggested protests surge in our multi-regression. What happened?

Do you want a chivato on every corner looking after you? Watching everything you do? Everything you say, man? – Tony Montana

Since 2009 the Chinese Communist Party has been testing out a “Social Credit System” that scores citizens on everything from paying bills on time, jay walking, volunteer work and other measures of participation in society. It was announced that the program would go live in 2020 but we have not seen any official start date. Under this program the government is using data from each citizens’ cell phone, and this has strengthened the CCP’s control over the Chinese people as it can use AI to track nearly all activity by its citizens except what takes place in the few cubic centimeters in their skull. The ability to track its citizens would certainly deter disgruntled people from participating in a protest.

One possible alternative to explain the drop in protests would be heightened arrests/detention of known dissenters. Data on Chinese arrests for 2017-2019 have not been published yet so it is difficult to test whether a heavy-handed crackdown could have led to less protests. However, looking at arrests of journalists, we do see that arrests have picked up in 2018 and 2019.

It is possible that arrests have deterred some from participating in protests along with better control over the masses.

It should be noted that once a citizen’s social credit score drops below a certain threshold, they lose privileges such as air and highspeed rail travel. By the end of 2018, the government blocked 17.5m air tickets and 5.5m highspeed rail tickets from “discredited” travelers according to the Guardian. These limitations, as well rewards for positive scores, could discourage members of society from participating in protests or even avoiding contact with people who have expressed interest in protests.

It’s called a changeover. The movie goes on, and nobody in the audience has any idea. – Tyler Durden

It is not clear when the social credit system goes live as there have only been references that it would be implemented in 2020. Looking at the decoupling of protests vs our projections, we think it is likely that the system is live. (The real conspiracy theory is whether the government used the Covid quarantines to go live with the SCS. It would make complete sense to start monitoring everyone when they went home for Chinese New Year and the government would have plenty of time to iron out any bugs as people were confined to stay home. This conspiracy theory is in the penumbra of possibility even for me…)

How Does This Change Our Assessment Of Markets?

Recall that we thought Trump would ratchet up pressure on China in a bid to build his coalition for reelection. Indeed, Trump has done just that with the administration announcing bans, sanctions and other forms of restrictions on Chinese people, politicians and companies. However, China has displayed incredible restraint when responding. The government clearly has control of its people in the near term and could hit back hard by canceling the 8-10MMT of corn and 15-23MMT of beans they have committed to buy which would torpedo prices down 15-23% on our price models and weaken Trump’s farm base. However, they have shown no indication of doing so. Why?

In order to get a better understanding of how and where the Chinese economy has been hit, we looked at the concentrations of industry by province and US Trade Census data for 2017, 2018 and 2019. We see that the Chinese economy was hit hardest in the Northeast, followed by central and southern China.

We see that the tariffs started to bite in 2019 with exports down for China and thus growth in the above regions. Furthermore, it’s estimated that Covid hurt the above economic regions which include lower exports to the EU in our 2019 projections.

Perhaps China is well aware that the US does have one last poison pill that would seriously erode its control over its people. This poison pill is quotas on imports. If the US were to cut 75% of imports (or thereabouts) from China, growth would slow and it would be amplified by the fact that the money multiplier for manufacturing is 1.3X (every unit of currency spent on manufacturing creates 1.3 units of currency in output). A slowdown of this magnitude for a prolonged period of time would seriously weaken the Chinese people’s acceptance of the SCS and/or they would reach a point where they would rather die than continue living in an oppressive and poor society. These two factors have led to revolutions.

As far as market projections go, we believe prices are the sum of probabilities of events multiplied by the prices in those events. Right now, we believe the market has a lower probability of the US ratcheting up pressure. However, we see no other choice for the US. Therefore, we are standing by our assertion that US treasury’s have considerable downside as we still believe there should be $3.8-4T in demand for money as the US enters a resuscitation of the skeletal structure of its supply chains. Higher rates should adversely affect precious metals prices and buoy the USD.

In this scenario it will be interesting to see what happens to Chinese monetary policy. A loss of dollars would stress its parallel banking system and seriously undermine the value of the Yuan.

We should all be wary of the SCS. To allow this system to work in China and proliferate to countries in its economic orbit (Belt and Road members) would steer us closer to an Orwellian society where this type of analysis, and the search for the “truth” would be denied.

The post China’s Social Credit System And Its Restraint appeared first on ValueWalk.