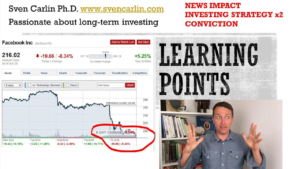 Facebook, Inc. (NASDAQ:FB) stock crashed 8.32% on Friday because of the announced ad boycott by many companies like Unilever, Coca Cola, recently Starbucks on Sunday that might push the stock down even more during this week.

However, investing is about knowing how to differentiate between the noise and fundamentals and we discuss Facebook’s recent news and compare it to FB fundamentals.

Good day, fellow investors. Oh my god, Facebook stock fell 8% due to the ad boycott. Oh my god 8%, now it’s back to where it was five weeks ago. So apology for the irony here, but the stock fell 8% and we have a few things to comment, how to react on the news, whether the volatility can be a strategy, what is going to happen to Facebook, is it noise and how it will impact fundamentals, my position and also one certainty that you have when it comes to investing in growth stocks.

Let’s start immediately with the content. We start with the ad boycott that happened over this weekend especially on Friday. New additions coming recently, Starbucks. I’m filming this on Sunday night, so it will come out Monday morning and then it will be again to be seen what will happen during the week and how it will impact Facebook over the short and long term. But this is something really interesting. There are a few key points that I want to discuss here. So we can immediately start with the content.

Let’s start with the Friday crash. So 8.43%. Again, after hours, another crash of 1.66 what we are at 10% crash in a day, which is a big crash for a company with a market capitalization of $615 billion. So the crash started over Friday, and then the stock went just down down as new companies announced boycotts, ad boycotts, and we’ll see whether there will be new ad boycott announcements, more bad news coming in from Facebook. And if that happens, then well you know what the story will be with the crash.

However, when people panic about stock crashes, impact, selling on noise, you always have to look a little bit back. And you can see that practically nothing happened 19th May 2020, this stock was where it is now. So Facebook lost just five weeks of what it is and that’s completely normal volatility.

So discussing Facebook stock volatility, also a little bit over the longer term, we see that over the last year, six months has been extremely volatile. If we go back five years or so, especially the last few years, the Cambridge Analytica scandal, the recent COVID crisis that pushed down everything.

So one rule when it comes to investing is that probably most stocks will go up 50% in a given year, and from that high crash 30%. So that’s a lot of volatility and you might think, Okay, then I would just have to buy when it comes to strategy I just have to buy at the bottom when something crashes 30% and sell when it goes up 50% that’s a great strategy. I can make a lot of money if it is statistically proven from Margin of Safety, Seth Klarman.

So let’s go a little bit deeper. Let’s go since Facebook’s IPO. And we can see here that of course immediately it went down I think it was 50%. Then up up, then there were many smaller crashes 2016, Google boycott ads also we’ll discuss this later, Cambridge Analytica scandals, first one, second one.

Really down a lot then up but let’s say that you are you buy when it goes down and then it can crash even more This was close to 50% so you sell you buy here, then it goes up you sell here but if you do that, if you did that here you bought it when it fell 30% you sold it when it went up 50% then you made Okay, you made some money, but you lost the 10 bagger or 8-bagger in your case because you sold a little bit higher, that Facebook became since then.

So if you sit on something, you find the good business and you sit on it for eight years, It can become let’s say 8-10 bagger if You have picked the right business. However, to get an 8-10 bagger by trading. First, not every trade will go well, it’s not easy to get this bottom and sell here and buy here, sell here, it’s very difficult to time. In hindsight it looks oh, so is it the stock will be volatile, which is something we’ll discuss in a moment.

But it’s not that easy to do. And to get, let’s say, to trade for a 10 bagger, you have to have a lot of good trades to reach something that those that bought Facebook 8 years ago reached without trading just by sitting on their assets. So this is investing, this is investing strategy. My investing strategy preferred one is to hold for the long term. We’ll discuss later my position and conviction. So don’t blame me for trading a little bit of Facebook here and there. But that’s a different story.

Let’s continue with the analysis. So we showed how Facebook reacted to all those historical crashes. And now let’s talk a little bit about the fundamental so fundamentals business quality business model. Each time there was a problem Facebook reacted and reemerged better, even in 2012. So that’s one thing that Facebook does. And then here are the main fundamentals 2.6 billion monthly active users, okay, many of them fake, hateful, whatever, but that still almost 5 billion eyes looking at this. So if you are an advertiser, nobody said they will never again advertise on Facebook.

They said they will suspend advertising for the month of July or at least through the end of July. So thats something that’s going on and that’s something we as investors have to see whether it is noise or fundamental issue, is a fundamental issue and then also compare it also the stock price and our intrinsic value.

As we said what to expect there was a reaction. I don’t know if he looks that healthy, a little bit of sun, a little bit of vitamin D would do good. Oh, that’s another story. But nevertheless, they immediately reacted yesterday with a live on Facebook, there will be probably much more reactions out there and this is what the company is and this is what investing is investing is investing in a business that will grow and there will always be hits, any business will always be hit.

Also to compare it to what happened in 2017. Also P&G that now pulled from Procter and Gamble that now pull the advertising also from Facebook did the same with Alphabet. They say YouTube improved after that.

So probably Facebook will improve after that too. Facebook has a lot of divergent, a lot of small customers, here are the most spending customers. So Starbucks 100 million, okay, it makes important especially when more of them hit the payroll, but for now it’s just a month so we will see what will be the fundamental impact on Facebook.

Now there is one certainty with growth stocks, which Facebook definitely is, and that is volatile. We have shown in the chart Facebook stock goes up and down because the price is not about the current fundamentals, the price is set about the expectations that are baked into the price. And especially now at exuberant, let’s say levels at big market capitalizations. Every small change changes, every small impact, every small news impacts the company and impacts people’s expectations that are baked in. That’s a growth stock, that is Facebook and that’s why you see that huge volatility.

Because if now Facebook needs to spend even more money to do whatever they do to protect what they have and make it let’s say, cooler without so much division and hate speech and everything, fake accounts, whatever, then their profits will be lower and on a growth stock, lower profits. So just go lower margins long term really changed the valuation of a stock. So, there is one certainty with a growth stock and that is huge volatility.

We just have to see learn about the business, follow the business and see how will that business develop over time and see whether what is the price with the possible profitability in the future and that is growth investing.

So when you look at the growth if you look at average revenue per person, so 6.52 in the last last quarter of 2018, going up 7.48 in 2019. Also comparable Q1 to Q20 also revenue up so Facebook is still growing, no matter what is going on or has been going on over the past year. Similarly, net income, however, has been growing but also hit depending here we had 5 billion of lawsuits that they had, fines that they had to pay for the Cambridge Analytica scandal. Here within really have net income grow as they as they are spending more and more. And that is what the market is concerned about, on one side exuberant about the growth when the stock goes up like crazy.

So on my position, disclaimer full open, as I said always on Facebook stock. I have this In my large portfolio in my large portfolio, I put all the stocks that I am interested in, that I think that are an OK, but not the top investments that I feel really good about it. So I put it in there and then I follow that and I have learned that when I own something, I really learn about it and I know about it. And so I have a little bit of stocks of Facebook and I also have traded Facebook in the past as I’m learning about it. And you can also watch my videos on Facebook if you just type Sven Carlin Facebook stock there from 2019, 2020, 2017, when I also analysed Facebook.

So to conclude the news impact, news versus fundamentals, when investing you really have to focus on fundamentals. Then, secondly, strategy from my experience and analysis. It’s really hard to trade and it’s better to invest and sit, that’s why I also focus on learning about great businesses.

And also maybe Facebook will be, maybe not, but keep in mind that Warren Buffett knew about Coca Cola from 1937. The first time he bought was 1988. So 51 years he didn’t touch it. Perhaps I will be learning about Facebook, who knows perhaps for a decade and then buy it and then make a lot of money in the coming decades.

That’s for me is investing. So I hope this video added some value to you. If it is like that, please subscribe to this channel. Click that notification bell. I’m now going into my working week. You can expect another video next Friday and then on Sunday. Thank you for watching, looking forward to comments and I will see you in the next video.