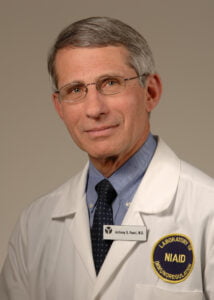 Following is the unofficial transcript of a CNBC interview with Shepard Smith and Dr. Anthony Fauci, National Institute of Allergy and Infectious Disease Director, on “The News with Shepard Smith” (M-F, 7PM-8PM ET) today, Wednesday, October 28th. Following is a link to the video on CNBC.com:  https://www.cnbc.com/video/2020/10/28/the-covid-numbers-are-stunning-and-its-going-to-get-worse-dr-anthony-fauci.html.

DR. FAUCI: Good to be with you.

DR. FAUCI: Well, the reason is I would hope that we could pull together as a country…

DR. FAUCI: …have realized the importance. Yeah, we have not and that’s the reason why I said very clearly…

SMITH: Is it time to for the mandate, Dr. Fauci? We lean on you for advice.

SMITH: Do we need a national mandate or not?

DR. FAUCI: You know, yes. Well, we do if we don’t get one, then I would hope that the governors and the mayors do it locally, if it’s not done nationally.

DR. FAUCI: But we need to get people to take it…

SMITH: But why would it not be done, Fauci?

DR. FAUCI: Well, I haven’t spoken to the President in quite a while about the situation with regard to the outbreak. But I can tell you right now…

DR. FAUCI: …regardless of that. What we do need is adherence to mandate or not. If mandate is needed, let’s do a mandate.

SMITH: But you’re the one who decides what is needed. Dr. Fauci. Is it needed? I mean…

SMITH: …we go back and forth.

DR. FAUCI: The situation. No, it is very urgent and that’s the reason why I have been urgently saying every single day that we have got to do things that have not been done uniformly and consistently throughout the country. The numbers that you put up are stunning. This is going to get worse because we’re going more into a colder season, as we get through the fall and into the winter with the holiday season going, we’ve got to do something different. We can’t just let this happen. We’re going to have many more hospitalizations, and that will inevitably lead to more deaths. So, this is an untenable situation. And that’s the reason why I say we have got to do these things. You’re using the word mandating masks – yes if that works, let’s do it. I don’t think it’s going to happen nationally.

DR. FAUCI: If it doesn’t happen nationally. The reason is because it might, it may not come from the White House to do it and if it doesn’t, then I think that the mayors and the governors should do it.

SMITH: There are mandates in more than 100 countries, even Russia is on board as of yesterday, but not here.

SMITH: Is there any, who does, who does the White House listen to on this?

DR. FAUCI: You know, I don’t know. There’s a lot of input from a number of different sources into the White House, it isn’t only one person. I mean obviously right now you’re aware that Dr. Scott Atlas has much more of an access to the President, regarding health issues than I do.

SMITH: How do you feel about that?

DR. FAUCI: You know, it doesn’t matter how I feel about it Shep. I’m just going to be doing my job, trying to get the message out as I’m doing here with you.

SMITH: The National Disaster Preparedness Center just issued a report on the novel coronavirus and concluded that at very minimum 130,000 American lives could have been saved as many as 210,000 lives, had we had what that center calls more robust federal coordination and leadership. Are they wrong?

DR. FAUCI: No, I think we should have had more. I mean, obviously, we have had a desperate response. I have been saying that Shep for months now, that when we have a uniform response, where all the states do things in a uniform manner with regard to mask distancing, avoiding congregate settings, it would have been different than if we get it the way we did it, which was we did it in a desperate way.

SMITH: That center goes on to say there’s little evidence to suggest that science based policies will prevail going forward with Donald Trump as president giving his attacks on science and government scientists. Do you agree with that?

SMITH: There’s new audio today, Dr. Fauci and I appreciate that and I thank you. There’s new audio, Dr. Fauci, that came out today on CNN, during which Jared Kushner said on April 7, seven months, eight – mid April, seven months ago, that the President was taking back the country from the doctors? Is that when the President stopped listening? Because many of us out here would like to know how this happened.

DR. FAUCI: You know, I don’t know exactly the timing, but it was clear that some months ago there was a pivot away from complete focusing on public health issues to looking at opening up the country with regard to the economy. That was very clear, and it was stated that way. And that may be what you’re referring to, but I’m not sure of the timing of that.

SMITH: 500,000 new cases in the last week. The President’s testing czar says that that’s a sign that we’re surging. The President says it’s because we’re testing more. There’s clearly confusion among the population about what’s really happening. Could you help us understand it?

DR. FAUCI: Yes. Unequivocally, there are more cases that are real cases. That’s manifested by the numbers, the data are strong. It’s also manifested by the fact that if you look at the map of the country where you’re having uptick in cases, we are also having upticks in hospitalizations. So, the cases are real. They’re not just as a result of testing.

SMITH: Earlier today, you talked to the Journal of the American Medical Association, or JAMA, and you were talking about what an extraordinary thing has happened in Melbourne. They had 111-day lockdown. Started with 20,000 cases a day and, as you pointed out two days ago, they had zero cases. Why can’t we do that?

DR. FAUCI: Yeah, you know, when you talk about lockdowns that certainly they were extremely successful. There is very little appetite for a lockdown in this country. There’s going to be a major pushback both from above and at the local level. However, what Melbourne did, what Australia did as a country was very successful. I was on the phone with my Australian colleagues two nights ago and they were describing exactly what you said. Whether or not that would be acceptable, I do not think so, Shep. I do not think it would be acceptable.

There’s COVID fatigue in this country and people would be pushing back strongly. If that’s the case, which I think it is, then we’ve got to do the next best thing. We’ve got to double down very, very strongly on the things that I’ve been talking about with regard to the universal acceptance of masks, distancing and avoiding crowds and congregate settings. If we did just that, we would be doing much better than we are doing right now.

SMITH: We spent much of the day, Dr. Fauci, trying to figure out where we are in a month. We talked to doctors all over the country, you know, a month from tomorrow – four weeks from tomorrow is Thanksgiving. People are making plans. Could you help give us a visualization, based on the science, what a month from now looks like in America?

DR. FAUCI: If things do not change Shep, if they continue on the course we’re on, there’s going to be a whole lot of pain in this country with regard to additional cases and hospitalizations and deaths. We are on a very difficult trajectory. We are going in the wrong direction. We’re averaging 70,000 cases per week. We’ve gone up as high as 83,000 last Friday. And if you look at the map that you just showed on the screen, there are a large number of cases – of states that are going in the wrong direction. If that continues, we’re going to be in much worse shape a month from now than we are today.

SMITH: I remember much worse shape for our small group in New York. I remember locked down for months on end and seeing no one and doing nothing. That’s not coming to the rest of the country. What does that mean to those surges around Thanksgiving? I mean, you look at El Paso and you just wonder how they’re going to come out of this.

DR. FAUCI: Yeah, there are certain regions of the country Shep, that are going to even have more of a problem, because there are some places in the heartland and in the Northwest that never had the kind of hospital and intensive care facility and flexibility that some of the larger hospitals in larger cities like New York, Chicago, New Orleans, Philadelphia and others. So, the concern is that if you talk to the people which I have done that, who are in those regions of the country, they’re concerned that if the trajectory continues, they may be in a position where they’re going to be strapped for things like intensive care beds.

SMITH: Dr. Fauci, I can’t thank you enough for taking the time. Heady days ahead. We’ll lean on you. Or as we say, follow the Fauci.

DR. FAUCI: It’s always good to be with you. Thanks a lot, Shep.