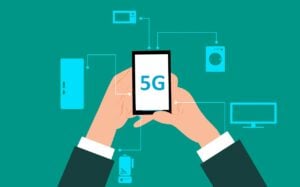 Amid the economic devastation caused by the Covid-19 pandemic, certain industries and technologies have seen significant gains.

One of these are the ongoing 5G network roll-out, which actually accelerated despite the lockdowns in China and various conspiracy theories linking the new telecom protocol to the virus. Another is Fintech: a sector already on the rise before the pandemic, but one which has received renewed attention (and a funding boost) in the context of remote working.

Though often viewed as distinct areas of technological development, in reality 5G and Fintech are deeply intertwined. The enhanced speeds that 5G networks offer promise to give rise to another Fintech revolution – what some analysts are calling Fintech 2.0.

In this article, we’ll look at why 5G is such a game-changer for the Fintech sector, and the near-future advances we’re likely to see in the industry.

If you’re unaware of the links between Fintech and 5G, don’t be embarrassed – these links are hardly ever mentioned. Where the capabilities of 5G networks are written about, this tends to be in terms of improving machine-to-machine (M2M) exchange, virtual reality and augmented reality, and the Internet of Things (IoT). Amid all these “more exciting” applications of 5G, Fintech doesn’t get much attention.

There’s a good reason for that. Companies developing Fintech solutions tend to be wary of admitting that their software has any kind of technical limitation, for fear that this will make them look insecure. The reality, though, is that existing 3G and 4G networks are a choke point on the capabilities of Fintech software.

This is mainly due to one factor: latency. At the moment, most 4G networks are configured to work with a 50 millisecond latency. This slows down commonly used but computationally intensive tasks related to cybersecurity, and ultimately limits the complexity that can be offered through mobile Fintech apps.

5G networks slash latency down to 1 millisecond. And while the difference between 50 milliseconds and 1 millisecond might not be perceptible to me and you, it allows developers to do far more with Fintech applications. These developments are likely to occur in three key areas: personalization, the IoT, and trading.

Let’s take a look at each.

At the most basic level, the advent of 5G is likely to make the user experience of the average Fintech app much smoother. With reduced latency, many common banking tasks – like payments and transactions – will become instant, and the increased bandwidth of 5G will allow more advanced encryption to be used to protect consumer data.

5G will also take personalization to the next level. With the ability to move previously impossible amounts of data, VR agents and chatbot advisors are likely to become common on mobile apps. These, in turn, could revolutionize the interface used in Fintech solutions, perhaps even allowing such apps to utilize voice recognition for common tasks and secure authentication.

One of the primary values of 5G, and indeed one of the reasons why governments and tech firms alike are so excited by the technology, is that it allows a much greater density of connected devices. At the moment, the 4G bandwidth available in many cities is the limiting factor on connecting more devices – from wearables to smart advertising screens. 5G promises to make the “ecosystem” of connected devices a reality.

When it comes to Fintech, this will have major effects. This is because greater connectivity allows for a far larger number of devices to be integrated together. This will lead to a surge in IoT devices, including smartphones, wearables, home appliances and public infrastructure.

In turn, this will allow banks and other payment providers valuable space to innovate. This could lead to payment capabilities being extended to a far greater range of devices than ever before – going well beyond the ability to pay using a smartphone or smartwatch, and integrating banking directly into wearables.

This is a rapidly developing field, and it’s not difficult to imagine some pretty exciting outcomes. For example, a customer could use a pair of augmented reality smart glasses to scan a product for sale in-store and apply a discount code and purchase instantaneously. They could even aim their smartphone at a concert poster and buy their ticket with a single swipe or nod of the head.

Up until now, 5G has largely been seen as a consumer-facing technology, and this is likely one of the reasons why executives don’t see 5G as important. However, it’s not hard to see that 5G can’t help but have a major impact on automated trading systems. These systems are currently constrained by the same latency problems as consumer-facing Fintech solutions, and so will also benefit from the increased speeds offered by 5G networks.

It may also be possible for complex decision-making factors such as those related to politics, economics, society and technology to be taken into account in real-time, and for avatars to be given responsibility for trading according to these factors.

In short, the implementation of 5G is likely to drive innovation in the Fintech sector just as much as in other sectors. Though Fintech providers are hesitant to admit it, current network infrastructure limits the creative freedom available to developers, and faster mobile networks will allow technologies that are standard elsewhere – voice assistants and high levels of personalization – to finally make an impact on the Fintech sector.

Last, but definitely not least, these technologies might also enable some 1.7 billion people around the world to access a bank for the first time. If that can be achieved, then the second Fintech revolution might be the most important innovation in finance this century.

The post Here’s Why 5G Networks are Set to Launch Fintech 2.0 appeared first on ValueWalk.