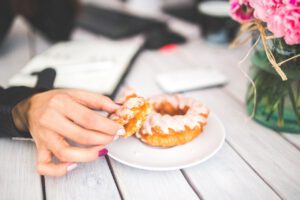 When I was in Eighth Grade, I wasn’t very popular, and in World History class, I sat behind a guy who was even less popular than me, and he was usually quite shy. Still it was my policy not to look down on anyone because I knew what it was like to be lonely, so occasionally I tried to be friendly to him.

Well, one day he came up to me and said: “Have you heard of Hertz Rent-a-Car?”

Guy: “Have you ever heard of a Hertz Donut?”

He gives me a big hit to my shoulder and exclaims “Hertz Donut?!” [To non-English speakers, the joke is that he was saying “Hurts, Don’t it?!”]

Well, as was common for many jokes with 14-year old boys, there is more energy than brains, so it was less than a week before the joke traveled around the junior high school, running out of victims, and long since bereft of humor, if there was any to start with. What surprises me now is that there is now actually a real meaning to the phrase Hertz Donut — it describes the stock of Hertz Global Holdings Inc (NYSE:HTZ) in the near future.

Hertz Stock Will Go Out At Zero

The stock of Hertz will, with high likelihood, go out at zero.

Start with this: the firm has filed for bankruptcy. Stockholders mostly get nothing in bankruptcy. Sometimes they might get a little new stock or some warrants to help them save face, because they are delaying the reorganization, but this is usually a trivial amount of money, and implies a big loss to the stockholders.

Second, the bond market is almost always smarter than the stock market, because it reflects the actions of institutional investors who are generally good at assessing risk. There are a large number of distressed debt investors out there, estimating what a reorganized Hertz will be worth. The senior unsecured debt is trading at $38 per $100 of principal. There is no preferred stock, and a minimal amount of second lien debt.

With the senior unsecured trading at such a large discount to par value, it seems impossible that the current stockholders would get much if anything out of a reorganization. Most of their assets are encumbered via ABS. The senior unsecured bondholders are the class of security holders that will receive partial payment, and as such, will likely be the controlling class of securities that will receive the equity in the new Hertz, while the old common stock is either cancelled, or receives some nominal allocation of securities in the new Hertz.

Thus I say to those who hold Hertz equity, sell your shares. Because of mindless speculation, the price is overly high. Take your opportunity, and sell to those who are less wise.

Now, some might ask… what are my motives in writing this? They are purely intellectual. I don’t short stock. It’s a very hard way to make money, and even if you are right, you could get caught in a severe short squeeze, and give up before the stock goes out at zero.

It is really tough to short a stock to zero. It is a “picking up nickels in front of a steamroller” type of play.

So, no, I am not long or short Hertz. Gun to the head, I would short it, rather than go long, but I would size any position to reflect the possibilities of a short squeeze. I.e., I wouldn’t short much.

Full disclosure: no positions in anything mentioned in this article