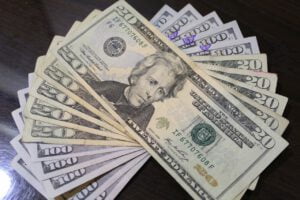 Times have been tough for plenty of people in 2020, regardless of age.

But things could go from bad to worse for Gen Z, the generation born roughly between 1997 and 2012, says Toby Mathis, a tax attorney, founding partner of Anderson Law Group and current manager of Anderson’s Las Vegas office.

Gen Z Is Getting Ripped Off

“The young people who are part of Gen Z, along with Millennials, are not only suffering more than Gen X and baby boomers, but they are getting ripped off because they will be saddled with the debts of the older generations’ mistakes,” Mathis says.

The current U.S. debt is more than $26 trillion. At some point something has to give, Mathis says, and Gen Zers could see a hefty tax hike sometime in the future.

Not that long ago, things looked rosy for Gen Z, as the generation’s first wave graduated from college into a booming economy.

Enter COVID-19, which threw the economy – and Gen Zers – for a loop.

Half of the oldest Gen Zers (ages 18 to 24) reported they had lost a job as a result of the pandemic, or someone in their household had taken a pay cut or lost a job, according to a Pew Research Center survey. That’s higher than what was reported by Millennials, Gen X and baby boomers.

How Gen Zers can Improve Their Financial Situation

While no individual is going to change the course of the country’s debt or economy, young people can take steps to improve their personal situations, Mathis says.

“Gen Z definitely has been dealt a difficult hand, at least in part because of the generations that came before them,” Mathis says. “But opportunities exist for them to make the best of a bad situation if they plan carefully and make wise decisions.”

Toby Mathis is a founding partner of Anderson Law Group and current manager of Anderson’s Las Vegas office. He has helped Anderson grow its practice from one of business and estate planning to a thriving tax practice and national registered agent service with more than 18,000 clients. In his work as an attorney, Mathis has focused exclusively in areas of small business, taxation, and trusts. Mathis has authored more than 100 articles on small business topics and has written several books on good business practices, including Tax-Wise Business Ownership and 12 Steps to Running a Successful Business.

The post How Gen Z Is Being Ripped Off By America’s Economic And Debt Troubles appeared first on ValueWalk.