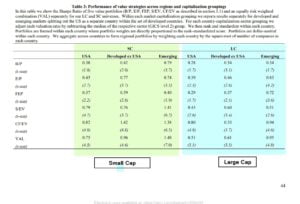 There is a large body of academic research demonstrating that the value premium has been persistent over long periods, pervasive across asset classes (stocks, bonds, commodities, and currencies) and also across and within industries, countries, and regions, robust to various fundamental metrics, and is implementable (survives transactions costs). In addition, there are intuitive risk- and behavioral-based explanations for why the premium should be expected to persist. Andrew Berkin and I presented the evidence in “Your Complete Guide to Factor-Based Investing.” With that said, the performance of value in equities, especially U.S. equities, over the past decade, has called into question whether the value premium is dead.

Ronen Israel, Kristoffer Laursen, and Scott Richardson, of AQR Capital Management authors of the March 2020 paper “Is (Systematic) Value Investing Dead?” analyzed four explanations that have been offered for the “death of value premium.” The start date for their data sample is 1990 for the U.S. and 1997 for other developed nations and emerging markets. This paper was also previously covered on our blog by Tommi Johnsen Ph.D so for another perspective on this paper see her post here.

Price-To-Book (P/B) Has Not Really Worked For Large Stocks For A Long Time, If Ever.

P/B is only one measure of value. The value premium is robust to multiple fundamental metrics. They demonstrated that the premium is evident across price-to-earnings (P/E), price-to-forward-earnings (P/FE), enterprise value (total equity market capitalization, preferred stock, minority interest, and total debt)-to-sales (EV/S), and enterprise value-to-cash flow (EV/CF). Sorting stocks into quintiles, while there is generally a monotonically positive relation between quintile buckets and future excess returns across the set of value measures, the evidence is strongest for the small-cap universe and stronger for P/E, EV/S, and EV/CF metrics. For example, in large caps, on a value-weighted (VW) basis, while there was only a 0.3 percent value premium (return of Q5 -Q1) using P/B, the premium ranged between 3.2 percent and 4.6 percent for the other metrics. In small-caps, on a VW basis, the P/B premium was 1.4 percent but ranged from 5.2 percent to 8.3 percent for the other metrics.

They next analyzed performance across 30 possible combinations of value strategies (two market capitalization categories, three regions (U.S., developed ex-U.S., and emerging markets), five individual value measures, and one combination value measure). They found that 24 show a value premium significant at conventional levels (test-statistic greater than 2) and 15 are significant at more stringent significance levels (test-statistic above 3). They noted that this is over a shorter, more recent, time period leading to lower test-statistics than are typically seen for value strategies. Importantly, they found that a diversified (equal-weighted) combination across the individual value metrics generates a strongly positive risk adjusted return (test-statistics well above conventional levels)—demonstrating the benefits of using an ensemble approach versus one single metric. For example, the Sharpe ratios and t-stats for the ensemble metric in small caps were 0.75 (4.5) for the U.S., 0.96 (4.6) for developed ex-U.S., and 1.48 (7.0) for emerging markets. In large caps the Sharpe ratios were 0.51 (3.1), 0.61 (3.5), and 0.95 (4.8), respectively. The results are hypothetical results and are NOT an indicator of future results and do NOT represent returns that any investor actually attained. Indexes are unmanaged, do not reflect management or trading fees, and one cannot invest directly in an index.

The authors concluded: “The overall message is that a diversified systematic capture of ‘value’ has done well over the last three decades across developed and emerging markets.” They also showed that portfolio construction rules matter. For example, they note: “Accounting rules can vary across both sectors and countries, and this simple demeaning step may be an efficient way to control for certain unintended effects.” They showed: “There is a clear improvement in Sharpe ratio as you control for sector or industry membership (the average Sharpe ratio increases from 0.73 to 0.88 with sector-level adjustments and to 0.96 with industry-level adjustments).” However, they did note that “the last decade has seen a marked reduction in the performance of systematic value strategies, and particularly so for the US.”

The Explosion In Share Repurchase Activity Of Firms Has Changed The Nature Of Book Equity Rendering B/p Measures Less Useful.

They found only mixed evidence of value working less well for the ‘High’ share repurchase sub-sample. For example, using P/B there is some evidence of lower returns for the ‘High’ group relative to the ‘Zero’ or ‘Low’ group in the SC universe, but not in the LC universe. Across other value measures, and the diversified metric portfolio, the evidence was muted—they could reject the null hypothesis of equal average returns across pairs (e.g., High vs. Zero, Low vs. Zero and Zero vs. Low) for only two combinations out of the possible 36 combinations (six measures, two size universes, three repurchase partitions). They concluded: “For both SC and LC there is no systematic evidence that B/P performs worse for firms that repurchase the most.” The results are hypothetical results and are NOT an indicator of future results and do NOT represent returns that any investor actually attained. Indexes are unmanaged, do not reflect management or trading fees, and one cannot invest directly in an index.

If the source of measurement error in an accounting attribute is due to an accounting standard systematically missing an asset (e.g., research and development) comparing similar firms within an industry that is R&D intensive, as opposed to comparing an R&D intensive firm with a retail firm, will help mitigate the problem. Israel, Laursen, and Richardson also noted that in the 2020 study “Explaining the Recent Failure of Value Investing” authors Baruch Lev and Anup Srivastava suggested that capitalizing R&D expenditures and selling, general & administrative expenses, and amortizing this ‘asset’ over industry-specific schedules yield adjusted, and possibly improved, measures of book equity and earnings. Their empirical analysis suggests an improvement in value strategies using such adjustments. There are now data vendors attempting to correct for multiple limitations embedded in the financial reporting system (e.g., Credit Suisse HOLT and New Constructs).

To test whether there is any efficacy to the criticism that accounting fundamental based measures of value have become less useful, Israel, Laursen, and Richardson analyzed the performance of valuation metrics using adjusted operating cash flows (HOLT’s EV/CF where the adjustments are designed to un-do various limitations in the financial reporting system). They found that over the last five years there was considerable similarity in the performance of value measures, especially for U.S. large stocks. They concluded: “A key inference to be drawn here is that the recent underperformance of value strategies extends to value measures that attempt to correct for deficiencies in the financial reporting system. It appears unlikely that the growing importance of intangibles or changes in business models is explaining the underperformance of value strategies.” They added: “Even with the benefit of perfect foresight with respect to future earnings and cash flows (over the next year) value strategies would still have faced headwinds.”

Central Bank Interventions And The Low-interest-rate Environment Over The Last Decade Have Distorted Asset Prices Via Lowering Discount Rates That Negate The Efficacy Of Value Strategies.

Israel, Laursen, and Richardson found that long-short, industry-neutral value portfolios exhibit little sensitivity with the level of interest rates (either the level of 3-month rates or 10-year yields, or the slope between them).

Systematic Value Strategies Are Just Too Naïve To Work As Everyone Knows About Them.

The awareness of a measure, such as P/B, does not negate the effectiveness of that measure as a potential source of expected returns. As the authors point out, “investors need to know about it and be comfortable in allocating capital to such a strategy.” Limits to arbitrage can also allow anomalies to persist. Most importantly, while awareness and increased buying of systematically cheap securities may reduce the return benefit coming from errors in expectations (the behavioral explanation for the value premium), it does not follow that a risk premium will disappear just because investors are aware of it. “Your Complete Guide to Factor-Based Investing” documents the many research findings providing evidence of risk-based explanations for the value premium. As Israel, Laursen, and Richardson point out the value premium was documented back in the 1980s. They also make the important point that risk-based explanations explicitly allow for negative return realization, making it difficult to reconcile large drawdowns with awareness/crowding concerns.

At any rate, if awareness had led to crowding and the elimination of the value premium, we should observe a narrowing in the valuation spread between value and growth stocks. Yet, we have seen exactly the opposite occur over the past several years. Thus, there is no evidence to support the idea that awareness and crowding have eliminated the premium.

Israel, Laursen, and Richardson also examined one other possible explanation for the underperformance of value stocks.

They explain: “Changes in expectations of fundamentals matter for stock returns, particularly when examining return intervals of a year or longer. Similarly, expected returns are strongly associated with realized returns after conditioning for cash flow news. The notable exceptions are the latter part of the dot.com period (1998 and 1999) and the 2018 and 2019. These are periods when the stock market placing less weight on fundamental information.  What mainly drove returns in both periods was multiple expansion, not changes in fundamentals.” They concluded: “When value underperforms the most, it is due to a combination of deterioration in fundamentals of cheap stocks (but not too much greater than normal) and a widening in the gap between prices and fundamentals (but considerably more so than average).” They added: “fundamentals do matter for stock returns, but there are periods where stock prices become less connected with fundamental information, and in such periods value strategies underperform. This has happened before, is happening now, and will likely happen again. However, absent a crystal ball allowing an investor to know ahead of time if the market is less in tune with fundamentals, the implication for value strategies is not clear.”

Israel, Laursen, and Richardson examined criticisms of value investing, including increased share repurchase activity, the changing nature of firm activities, the rise of ‘intangibles’ and the impact of conservative accounting systems, the changing nature of monetary policy and the potential impact of lower interest rates, and value measures are too simple to work, and found little empirical evidence to support them. They provided two other important observations. The first is the strong evidence that fundamentals matter for stock prices and the underperformance of value in recent years cannot be explained by deteriorating fundamentals. The second is that even if value provided no premium, the diversification benefits provided by negative correlation of the value premium with other common factors (market beta, momentum, profitability, and quality) should lead investors to include an allocation to the value factor.

The post Is Systematic Value Dead??? appeared first on ValueWalk.