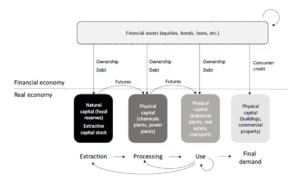 A rewarding part of focusing our investing on a topic for which society is still developing answers is the opportunity to be exposed to fresh and innovative thinking. One area of underdeveloped thought is how stranded asset risk from climate policy may cascade through global supply chains.  A somewhat dated but underappreciated paper on the topic, “Networks of Stranded Assets: A Case for a Balance Sheet Approach,” suggests that our understanding of stranded asset risk is too limited in scope. The extent of this risk is more widespread and complex than is generally appreciated.

Insofar as an investor has a goal of insulating their portfolio from the adverse effects of climate change, retreating to the companies at the end of supply chains may not provide the protection that people think it does. Exposures via equity holdings to the fossil fuel industry are small (4-13%), yet the combined exposures to the climate-policy relevant sectors are large (48%) and heterogeneous. [1]

At the core of this finding lies the recognition that our interconnected economies allow for, and encourage, the propagation of risk through the system in a cascading fashion.[2] The notion of “cascading stranded assets” is presented and well supported within “Networks of Stranded Assets: A Case for a Balance Sheet Approach” and is an idea which we believe is long overdue for a more public presentation. A review of this research is an appropriate backdrop to outline this argument.

The authors identify three types of potentially stranded assets at risk in most portfolios:

These three asset categories are deeply interconnected, but little work has been done to assess the nature of these interconnections. This type of analysis is complicated by the density of linkages in the economy. The web of interconnections may suggest that buying and selling are bi-directional and perhaps circular. Still, all purchases are not equal to sales between sectors and so the directionality and scale of payments matter.

How do we distinguish between more and less critical linkages in a network of exchanges? Well, one observation is that there is a one-way flow of raw materials and energy-constrained by thermodynamics, which means many of these sectors are likely not be to be revisited. In other words, path dependency can be established, and there is a directionality to certain parts of our economy that cannot be reversed.

As we move from raw materials to intermediate goods to finished products, the value add of goods increases, and so too does the value of the assets involve and the size of the associated liabilities.  When viewed this way, the stranded asset risk of natural resources appears less significant than that of long-lived capital assets that exist outside of the natural resources sector but are nevertheless dependent on inputs from the extractive industries.

The result is the graphic below, which shows the connections between industries. [3] At the bottom of the diamond (labeled B) is the mining industry, each level of coded variables represents industries that are further and further away from the mining industry but are nevertheless dependent on some product that relies either directly on the mining industry on indirectly via an intermediate product for production in some way.  In the case of mining in France, what the authors found is strong connections with C20 – the chemicals and chemical products industry, C23 – Other non-metallic products, and F – the construction industry.   We will focus on C20 chemicals. 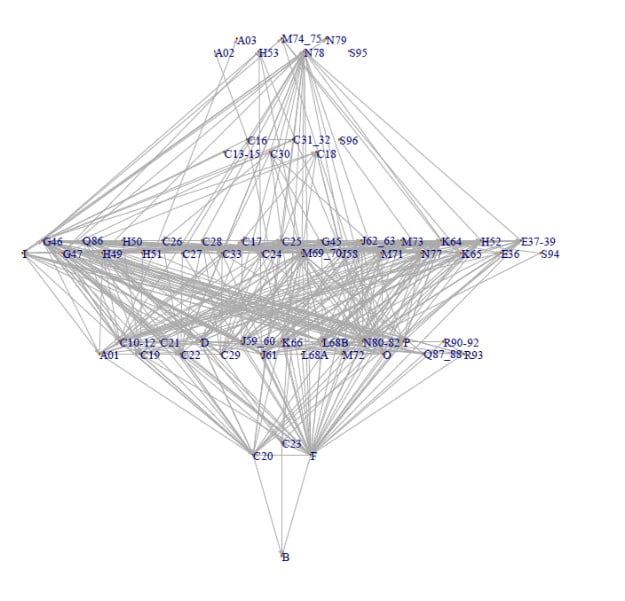 As the network map demonstrates, the Chemical industry touches A01 (agriculture), C10-12 (food, beverages, and tobacco), C19 (coke and refined petroleum)[4], C21 (Pharmaceuticals), C22 (rubber and plastics, D (Electricity, gas, steam and air conditioning), and F (construction).  Any change to the carbon footprint heavy mining industry is a transformation of the physical basis of the economy, stranding assets at the base of the diamond, and imperiling assets at each level above as changes to lower levels necessitate changes to operations at higher levels. In short, changes to the base of the diamond can ripple, or cascade through other sectors – and their associated assets.  The authors present the following example to demonstrate better what this cascade might look like:

On the left, we have a picture of what the current linkages between the mining, chemical, and agriculture industries in France look like.  Agriculture is not directly connected with mining, but through the industries’ need for fertilizer, agriculture is indirectly related to mining via the chemicals industry, which produces fertilizers from feedstock provided by the mining industry.

On the right, we have a hypothetical scenario that removes the mining industry from the equation. Indeed, an extreme scenario but helpful to contextualize the impact even if only a fraction of the industry is starved of capital by policy and divestment initiatives (hypothetically). In such an event, the chemicals industry must now retool its operations to take inputs from the agriculture sector, to then create new products for the agriculture sectors. Investments in intellectual property (industrial process knowledge, chemical formulations, industry relationships) and physical assets for handling and converting feedstock from the mining sector are, under the low carbon structure, of limited value relative to its value under the current structure.

Of concern for investors is not just the fact that these linkages are under appreciated, but that the failure to take them into account results in vastly underestimating the potential size and scope of stranded assets.  Put another way, as we move products through the supply chain from raw goods to finished product, the value of assets at risk increases, and our ability to see the paths through which risk propagates decreases.

Within Austrian economics, there is a concept called a Hayekian triangle, which presents the stages of production in an economy.  The triangle (below) has duel interpretations.  On the one hand, it depicts goods in the process moving through time from inception to completion. On the other hand, it represents the addition of value created via processing, with lower value goods on the left being low margin and higher value goods on the right being high margin. 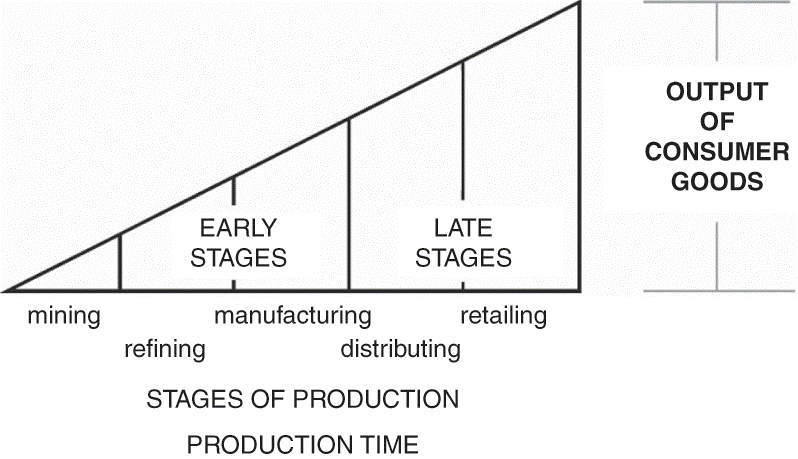 The increased value of later stage goods depends on the processing of lower-value goods earlier in the production chain.  The value rises through processing, but robustness, or insensitivity to changes at earlier stages of production, decreases in incalculable ways. In the example of the French economy, the value of the mining and quarrying sector sampled for the network analysis had an asset value of roughly 13.2 billion Euros.  The chemical sector, being further along the production process, and having added more value to the inherent natural value of mined goods, had an asset value of 58.9 billion euros.  That value hinges on, amongst other things, the relationship between the smaller mining industry and the larger chemical industry.

The potential pool of stranded assets in the chemical industry is nearly 4x the size of that in the mining industry, and the mining industry provides many of the critical inputs and feedstock that supports that value. A focus on the extractive industries alone, when considering stranded asset potential, gives a misleading picture of the total value of real assets at risk in a transition to a low carbon economy.

The Cascade Does Not Stop with Physical Assets

The cascade of assets at risk does not end with physical assets, far from it, in fact.  As the following graphic highlights, each stage of production has financial assets at risk of stranding: 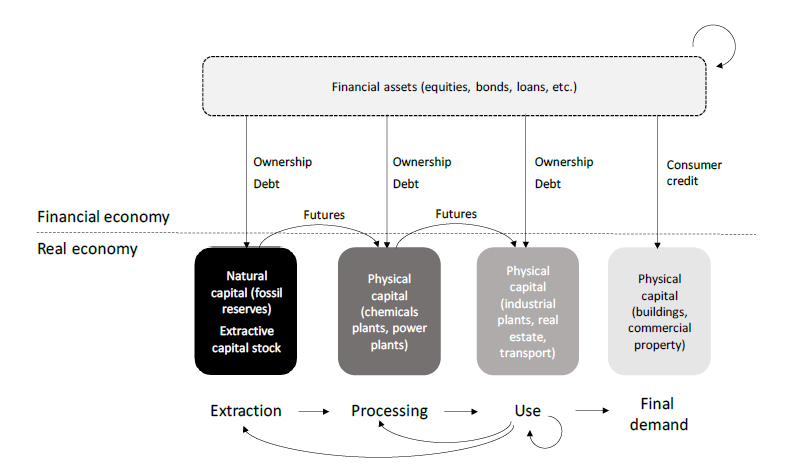 There are two implications. The first is investors must pay more attention to balance sheet quality in a transitioning economy.  The stranding of physical assets may lead to a reduction in credit availability, depression of investment, and spirals of defaults. Alternatively, it could mean a significant investment in a new plant is necessary to replace, upgrade, or retool equipment not entirely suited to the new operating environment. The second implication is that the interconnected nature of the modern financial system means the spread of risk is high.

Given the high possibility of spread, investors must adequately diversify. Still, a flight to purely low carbon footprint businesses seems entirely inappropriate and suggests an incomplete understanding of the scope of the problem. Instead, diversification across businesses in different sectors that are prepared for and anticipating these changes is called for. In essence, not just industry diversification, which is easy, but business model diversification, which requires active management. It also happens to be consistent with our viewpoint that starving the industries that most desperately need to change of capital by under-investing in them, only increases systematic risk as price adjustments may be abrupt. Decarbonization will require investment in carbon-intensive businesses, not divestment from them.

The transition to a low carbon economy is likely to have adverse impacts on all sectors that base their production on carbon-intensive resources and technologies. Although the stranding of assets within the impacted areas (mining, oil, and natural gas, etc.) has a high probability, the value of assets impacted is relatively low in terms of the aggregate financial system.  The potential for propagation down the supply chain means there are lower probability, higher-impact events that are more difficult to foresee and thus pose a higher risk of permanent loss of investor capital.

[2] We have a telling example of this concept in the form of the current pandemic.

[3] Note that this graphic, and the interconnections studied, represent connections between industries with a minimum connection value of EUR 460 million. Meaning smaller linkage (as measured by economic value), are not included in this analysis.

[4] It is worth highlighting that the Petroleum and Refined products is downstream of Chemicals and Chemical products, which is surprising, and may be a function solely of the French economy, but may also be a function of the fact that many large firms within the chemicals and petroleum refining sectors are vertically integrated in both businesses.