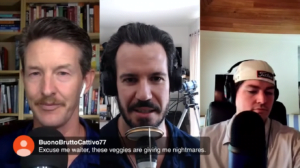 During their recent episode of the VALUE: After Hours Podcast, Taylor, Brewster, and Carlisle discussed Nikola Corporation (NASDAQ:NKLA) Goes Downhill. Here’s an excerpt from the episode:

Tobias: It’s so funny that in the moment, all of these things sort of seem to make sense. But given a few years’ distance from them, I think that a lot of the things that are going on now will look really silly. And Nikola, I think is the most egregious example of it and I’ve haven’t really followed that closely until recently. I know that it’s been around, and it’s been comical in the background. I feel a little bit bad because they are trying to do something good. It is a good idea. Whether they can execute on that good idea is another question entirely. I don’t know how charismatic the main guy is but clearly, they’ve modeled it on Tesla. They’re trying to create– they’ve taken Tesla’s first name, they’ve created a– and it’s not battery-based but it’s a hydrogen-powered truck. They’re trying to save the environment. It takes many of these–

Jake: I thought it was gravity powered.

Tobias: It turns out. [chuckles] [crosstalk] I don’t want to steal from your segment, but I think it’s useful to use your tools to deal with my problem. Shall we do that?

Jake: I don’t have anything else smart to say.

Tobias: Well, you can maybe comment on what we’re talking about here. So, Nikola Corporation (NKLA), if everybody hasn’t been following, there are quite a big company, that it’s a $20 billion or $13 billion enterprise today, got about $700 million in cash.

Jake: What was the revenue?

Tobias: A 100 grand, which they got from installing solar panels on the roof of the chairman and the CEO, I think. That’s roughly what’s happened, something like that. I might be getting the people wrong, but it’s roughly what has happened, 60 grand and 40 grand over a couple of years. They’re trying to build these trucks that are going to run on hydrogen, laudable goal.

If it was a micro-cap, and I was doing these things– you hear so many stories about an entrepreneur gets a VC into his office, and he hires a whole lot of people who are like extras who stand around looking really busy and passing bits of paper and typing. And everybody says, “Well, that’s a hustle, man.” That’s what it takes to get across the line. You get the investment, then you figure it out. Theranos was trying to do the same thing, except dealing with people’s lives and at no stage, they actually come up with a working prototype.

These guys, how is it any different from what anybody else is doing? They just say we’ve got a working truck, they didn’t. The way they pretended that they did was they had it roll down a hill. And then, they’ve raised some money. Now, they really do have a couple of working prototypes, from what I can tell. I’ve looked at a little video where the guy gets in it and drives around, maybe there’s blokes pushing it the back and they just put the– [laughs]

Bill: Get back here, we’ve got to make a marketing video.

Tobias: It looks like they’ve got something working now. This is the thing– Hindenburg is the short report. They’ve come out with 52 questions. Nikola Corporation (NKLA)’s dealt with about 10 of them. The 52 questions, I’m not going to go through all of them, even their responses, just the ones that– So, the truck rolled down the hill, not under its own power. They said they’re buying this battery technology, turned out to be totally vaporware. Nikola’s in the same boat, so they can’t really get too upset about that. And they kind of hid it from everybody else. They say they’ve got this $3.5 billion truck order, but it comes from a company with $1.3 million in cash. So, it’s going to be difficult to pay for it. And then–

Bill: Got to tap those debt markets.

Tobias: Well, what would they feed it with? How do you pay for the interest?

Jake: You joke, but that’s actually an important point of how much of this stuff had been called bullshit on if you couldn’t get easy monies so readily.

Bill: It is a surprising deal to see.

Tobias: From GM’s perspective, it’s not a bad idea. They get the $2 billion in cash to sign the deal. Sorry, $2 billion in stock to sign the deal. Then, they get paid to design and manufacture the truck or the Badger or whatever it is that they’re going to do for them. They’re paid as they do it. From GM’s perspective, they’ve got a partnership with this hot company, and they’re going to get paid to do the deal. I wouldn’t fault them for doing that. They’re not tying up any more closely– [crosstalk]

Tobias: What Nikola Corporation (NKLA) goes and tells everybody about the deal is a different matter to how GM views the deal. All of these things are grey. From my perspective, if it was a micro-cap, and it was making all of this move, this is like these guys have got some hustle. Maybe they’re going to get there. Maybe they’re going to get there. Maybe this is something that you want to take a flyer on. And then, you go and look at the market cap. And it’s as if they’ve already done it, it’s as if they’ve been doing it for a decade.

Bill: Well, you just discount what you think that they’re going to do on the future at zero and, boom.

Tobias: That’s it. That’s the only way to justify it.

Bill: I don’t know. I don’t understand any of this stuff, man.

Bill: I guess there’s probably some theory out there that makes it worth it. To be perfectly honest, I’m not 100% sure what is different about that than some of the other things that I read. Now, that said, many of these other companies have a working product. I don’t discount that.

Bill: Yeah. I guess it seems to me that– this is maybe because I don’t understand what I’m talking about and I will freely admit that but–

Tobias: This is a podcast. That’s true!

Bill: No, I understand that, but it just sort of feels like generally speaking, the narrative game is like–

Tobias: It’s all that matters.

Tobias: You don’t have to deliver.

Jake: Let’s imagine that there is a natural rate of technological progress, that just humans tinkering in garages will come up with. What if all of this cheap money and lack of criticism, lack of caring about it actually working is almost like overclocking that technological progress that we would normally have. It’s like throwing more balls into the lottery and we pull one out that happens to actually change the whole game. Maybe, they have some hydrogen breakthrough that completely revolutionizes how humans move atoms around the Earth. Well, maybe it was worth printing all this bullshit money and being able to borrow and dividing everything by zero rates. I don’t know, maybe that’s good for us. Who knows, and maybe just join them instead of crying about it.

Tobias: I sort of thought–

Tobias: I sort of thought I was making the counterargument. Ian Cassel would have a much better way of diligence in something like Nikola Corporation (NKLA) than I would. But from my non-listed VC style, I look at it and I think like it does have some of the ingredients that you would need to make this thing succeed. They’ve got the cash. They’ve got a big partner. They’ve got a couple of working prototypes, now they seem to– they’re doing stuff. I’m not going to take a swing at this thing at $13 billion. I wouldn’t take a swing at $1.3 billion.

Bill: [crosstalk] –had my boy, Uben, out there, long hair and all. Man, come on, Jeff, tighten it up.

Tobias: He’s a very charismatic, good-looking boy. And he also did Valiant, so got to be careful there.

Bill: I still like him. But this is tough. This is strike two and the potential frauds.

Tobias: But maybe then again, their deal is different too. They get in super, super early, in the SPAC before it goes through it. Their pay off looks different to everybody else’s. They’re like, “Yeah–” Many of the things that I listed, at a much, much lower valuation, you’d be like, “Yeah, I’ll take it. I’ll have a swing at then.” My whole objection to this is the–

Jake: Yep. You get early on the pyramid scheme, it can work.

Tobias: That’s it. My whole objection is the valuation. I’m just like, “This is nuts. It’s crazy.” Even if everything works, it’s too expensive.

Tobias: Yeah, valuation doesn’t matter anymore until it does.

Bill: I find some of this stuff– If I didn’t look at valuation, I’d probably enjoy it a lot more. So sometimes, I just don’t look. Sometimes, the valuation of things offends me to the point that I close my mind, and that’s not a very good habit.

For more articles like this, check out our recent articles here.