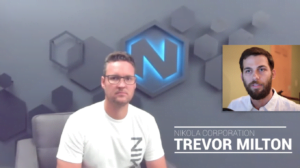 Mr. Miltono spoke to us via webcam with what looked like a bear painting behind him. Miltono first assured us it is the best buying time in this investment vehicle.

“You always gotta buy the dips. Right now we are just in a strategic dip for maximum profits later.”

He continued, “stock always go up and we just got on the market so we gotta go up man.”

We asked him what Mr. Milton was doing with the shares that he owned. Mr. Miltono said “Mr. Milton is selling them currently to put them on the market for everyone else to be able to buy in at this discount. He is truly being generous to sell at such a low price for everyone else sake is classic Trevor.”

To the allegation that the video of the semi vehicles was not moving under it’s own power and instead rolling down a hill, he said, “no way man that vehicle is legit, Trevor the incredible visionary wanted to fill it and then play it in reverse like some Andy Warhol stuff.”

Mr. Miltono said he had the original video and produced a DVD with the word original on it. When he played the video it showed the semi rolling backwards.

Mr. Miltono said, “look you see he filmed the truck moving in reverse, and then when played it to the public it was the reversed video, since it’s artsy and cool to do that stuff.”

Allegations About The Cable Charger

Next he wanted to deal with the allegation that his battery vehicle had a cable charger on it when being demonstrated. Mr. Miltono assured us that was not what Hindenburg was alleging.

He said, “it is one of our newest advancement in battery technology. It’s a DC trickler, you see while have to monitor our batteries, and make sure they are operating properly, this little thing a majigger lets us know it will work right. When the commercial versions continue to roll off the factory in Germany, it will be much more portable.”

The last item he wanted to clear up now was the claim about the back order from US Xpress and their ability to pay.

Mr. Miltono said, “yeah that order is going through, don’t worry they used a platinum American Express card, and we totally accept that form of payment. Also if for some reason that didn’t work we would just have them put some bitcoin in an escrow account and wait for it to go to the moon.”

Being a writer for The Stonk Market, we have no idea what a platinum American Express card is, since Eloise charges us $1,000 per article we write with a minimum of 10 articles a month, or else she will start a fire in our apartment to evict us. We have to take Trevoro at his word on this one.

So as you can see things are business as usual at Nikola Motors and running just fine. We heard that Mr. Martin would be in Argentina to give a response for the rest of the allegations alongside his new PR Firm and account manager Mr. Miltono.

This satire article first appeared on The Stonk Market