The rioting and civil commotion across the United States in recent days is thought likely to cause insurance market losses of as much as $1 billion, but with retentions generally quite high on exposed programs, carriers may not be able to pass on too much of their losses to reinsurance capital. 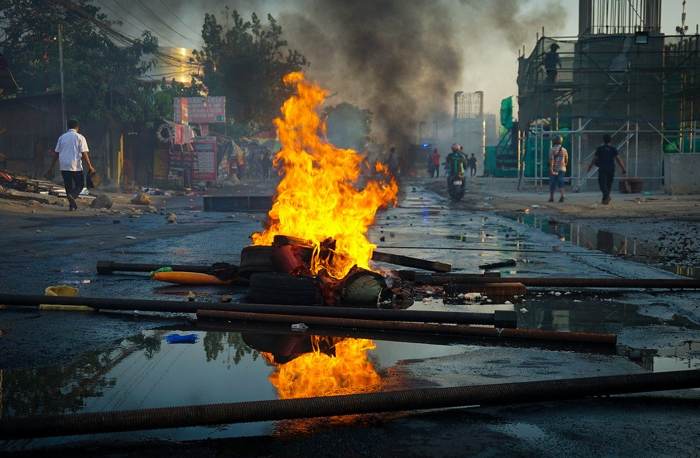 While that doesn’t guarantee a high industry loss, PCS’ threshold for reporting catastrophes is that they will cause an insurance market loss of at least $25 million, the fact the riots, looting and disturbance has been so widespread does suggest that it could be one of the most expensive strike, riot, and civil commotion (SRCC) loss events for the insurance industry in history.

Speaking to analysts at Wells Fargo Securities, Dr. Robert Hartwig, the past President and Chief Economist at the Insurance Information Institute and currently a Professor of Risk Management, Insurance and Finance at the University of South Carolina, explained that the loss is unlikely to be particularly large, but could extend to $1 billion.

Dr. Hartwig said he expects that industry losses from the ongoing U.S. civil unrest will be in the $500 million to $1 billion range.

He explained that the unrest will satisfy the physical property damage clauses required for business interruption coverage to be triggered, meaning insurers will be on the hook for payouts as a result.

This is, of course, on top of actual physical damage claims for the businesses looted and properties damaged during the riots and unrest.

However, tempering the eventual industry loss is the fact that payouts may be based on current operating capacity, which has been reduced by the COVID-19 shutdowns, Hartwig explained, rather than normal operating capacity for the previous years.

That could reduce the actual claims amount by a significant amount, perhaps suggesting if it proves not to be the case then losses could rise above $1 billion.

Hartwig also noted that disputes are likely to occur because of this fact, as claimants will try to push insurers for full business interruption payouts, Covid-19 lockdown or not.

PCS also noted that some business owners may try to claim as much as possible from their business interruption coverage due to the riots, given they may have been denied coverage for the pandemic recently anyway and that this could ultimately inflate the riot related losses.

Executives at reinsurance firm PartnerRe told the same analysts from Wells Fargo that while it would not speculate on the ultimate industry loss from the ongoing rioting, it does have an hours clause that covers riot losses.

They noted some similarities to the Chilean rioting of 2019, which as we explained recently are thought to have driven retailer specific property losses of close to $1 billion, as well as other claims costs.

But, the PartnerRe execs said that the net retained exposure of insurance companies in Chile is much lower than it is in the U.S., which means reinsurance coverage can be triggered much faster there than it would be in the United States with these riots, suggesting insurers will retain more of this loss.

The most expensive outbreak of rioting in insurance claims terms was previously the Los Angeles riots of 1992, which cost around $750 million at the time, according to the Insurance Information Institute. In 2020 dollar terms that would have been a roughly $1.42 billion insurance market loss.

The recent riots are far more widespread, so it will be interesting to see how the costs aggregate.

Riot losses said up to $1bn in U.S., retentions may protect reinsurance was published by: www.Artemis.bm
Our catastrophe bond deal directory
Sign up for our free weekly email newsletter here.