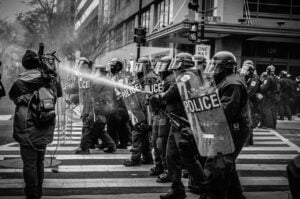 Taser a Deadly Weapon? – Not the Legal Issue in Atlanta Shooting; Must Also Create a Significant Threat of Death or Serious Bodily Injury

A Taser Is Not A Deadly Weapon

WASHINGTON, D.C. (June 14, 2020) – An attorney representing Raymond Brooks claims that his shooting was unlawful because Brooks had only a Taser in his hand, and a Taser is not a deadly weapon which would then permit an officer to use deadly force to lawfully defend himself.

But that’s not the complete legal issue, suggests public interest law professor John Banzhaf, since a person holding a knife (with is clearly a deadly weapon) 15-20 feet from an officer would not appear to present a significant threat at that distance, whereas people who used a shoe – not ordinarily regarded as a deadly weapon –  to beat another person have been charged and convicted of assault with a deadly weapon (“ADW shoe”).

In short, many apparently innocent items – e.g., a shoe, or a pen or pencil – may become a deadly weapon, and justify the charge of assault with a deadly weapon, if they are used in a way so that it reasonably appears to be capable of causing serious injury or death to another person; for example, shoving a pencil up a victim’s nose, or beating his head against the ground with a shoe.

In a famous “fleeing felon case” of Tennessee v. Garner, the U.S. Supreme Court held that, under the Fourth Amendment, a police officer may not use deadly force to prevent the escape of a fleeing suspect unless the officer has probable cause to believe that the suspect poses a significant threat of death or serious physical injury to the officer or others.

This means, says Banzhaf, that even if someone who has committed a serious felony would forever escape if the police did not shot him as he fled, they may not use such deadly force unless it appears that he is likely to harm police officers or a member of the public if he is not stepped then and there.

So while the fact that a Taser may not be regarded as a “deadly weapon” in Georgia would certainly undercut any argument by the shooter that he had reason to fear serious bodily injury from its use, the same would probably be true if Brooks had a small knife but was far enough away that he did not pose a significant risk to the officer.

While it is possible for a Taser to cause serious injury or even death, such consequences are very rare.  Indeed, says Banzhaf, some police departments require new officers to be shot with a Taser themselves so that they will know what it feels like, and the effect it is likely to have on a suspect.  TV reporters have also demonstrated its effects by being short with it on air.

Fear Of A Serious Physical Injury

So even if, at the distance between Brooks and the officer at the time of the shooting was such that the Taser could have reached the officer, a jury could certainly find that it did not create the reasonable fear of serious physical injury to the officer which would justify shooting Brooks – especially since the officer was probably wearing a bullet-proof vest which would prevent or at least severely limit the ability of the Taser to cause any harm.

So, under the circumstances, argues Banzhaf, there is probably enough probable cause to justify the arrest of the shooter, although whether he should be permanently removed from the force and/or be found guilty of a crime may depend on the further development of additional facts, and a fact-finding process under which he is entitled to due process.

But, he suggests, it probably would not depend solely upon whether a Taser meets some legal definition of a “deadly weapon.”

The post Taser A Deadly Weapon? – Not the Legal Issue in Atlanta Shooting appeared first on ValueWalk.