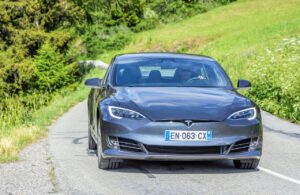 Tesla continued to hold the majority of the EV market, but Ford took a significant bite out of that share. According to Morgan Stanley, Tesla’s share of the BEV market fell from 81% last year to 69% in February. The Ford Mustang Mach-E accounted for almost all of Tesla’s share loss. Total electric vehicle sales grew nearly 40% in February from last year.

BEV penetration stood at 2.6% in February, compared to 1.8% last year. However, the firm noted that electric vehicle sales probably accounted for a larger percentage of revenue because their average selling prices tend to be higher.

Some caveats about the numbers

Electrek notes that there are some caveats to Morgan Stanley’s report. Tesla doesn’t offer as detailed of a breakdown as other automakers do, and all states don’t provide registration data. As a result, Tesla’s U.S. sales are estimates rather than actual sales numbers.

Further, the automaker allocates its production to global markets in a different way than other automakers. Tesla’s sales vary widely from month to month as it sends vehicles from its factory in Fremont, Calif. to other markets.

Further, production on the Model S and Model X shut down last month due to the refresh, while Model 3 production slowed due to parts shortages.

Tesla and Ford are both in the Entrepreneur Index, which tracks 60 of the largest publicly traded companies managed by their founders or their founders’ families. Tesla CEO Elon Musk co-founded the company and now serves as CEO. He’s been battling Jeff Bezos, CEO of Amazon, another Entrepreneur Index company, for the title of the wealthiest person in the world.

At Ford, William Clay Ford Jr. serves as executive chairman, while Edsel B. Ford II serves on the board of directors.