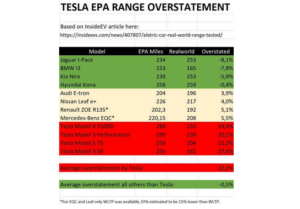 We remain short the biggest bubble in modern stock market history, Tesla Inc. (TSLA), which currently has a fully diluted market cap of approximately $445 billion, roughly equal to those of Toyota, VW, GM, Daimler, BMW and Ford combined despite unprofitably selling fewer than 500,000 cars a year to their nearly 40 million. The core points of our Tesla short thesis are:

In early October Tesla will report Q3 unit deliveries for which expectations (following multiple recent price cuts!) are in the 140,000s, well short of the company’s self-proclaimed current quarterly production capacity of 173,000. Nothing is more amusing than seeing this giant stock promotion of a company try to perpetuate the illusion of being “supply constrained” by continuing to add capacity (expanding its Chinese factory while breaking ground on new factories in Texas and Germany) in order to desperately try to maintain an image of “limitless demand” while it continually slashes prices to unprofitable levels (excluding unsustainable emission credit sales and accounting fraud) just to utilize far less than its existing capacity!

For Q2 2020 Tesla reported net income of $104 million, which was laughably deceptive as it included $428 million of pure-profit emission credit sales, a revenue stream that will be drastically reduced later this year and disappear completely some time in 2021 when other manufacturers have enough EVs of their own. Excluding that, Tesla lost $324 million, and that’s before accounting for its fraudulently low warranty reserve. As for other blatant examples of nonsensical or unsustainable accounting, @WallStCynic pointed out: “D&A was down (!) Y/Y, despite a new factory coming online. SG&A + R&D was also down Y/Y.” Here’s a great chart from GLJ Research showing Tesla’s awful record of quarterly net income excluding emission credit sales: 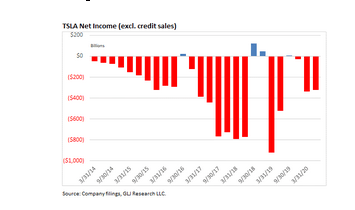 As for Tesla’s “China growth story,” that EV competitive landscape is now getting vicious: Tesla’s July China sales were down considerably from June’s and August was up only 800 units over July, while a price war there is just getting started. In fact, Tesla’s brand new Chinese factory has so much excess capacity that it’s now exporting to Europe and elsewhere in Asia! And oh, for perspective: in Q2 Tesla sold approximately 30,000 cars in China; GM sold 713,000, and in August Tesla sold fewer than 12,000 there; lets see how everyone else did:

And for those of you looking for a resumption of growth from Tesla’s Model Y, demand for that car is so poor that Tesla already slashed its price shortly after it was introduced:

This is unsurprising, as its quality is awful, and later this year and in 2021 it will face competition from the much better built electric Audi Q4 e-tron and Q4 e-tron Sportback, BMW iX3 (in Europe & China), Mercedes EQB, Volvo XC40, Volkswagen ID.4 and Nissan Ariya, while less expensive and available now are the excellent all-electric Hyundai Kona and Kia Niro, extremely well reviewed small crossovers with an EPA range of 258 miles for the Hyundai and 238 miles for the Kia, at prices of under $30,000 inclusive of the $7500 U.S. tax credit. Meanwhile, the Model 3 now has terrific direct “sedan competition” from Volvo’s beautiful new Polestar 2 and the premium version of Volkswagen’s ID.3 (in Europe), and in 2021 from the BMW i4.

And oh, the joke of a “pickup truck” Tesla previewed last year won’t be any kind of “growth engine” either, especially as if it’s ever built it will enter a dogfight of a market.

And for those who still think “Tesla is years ahead of the competition,” the most competitive EV region in the world is Europe, and Tesla’s EV market share there has now declined from over 30% to a year-end estimate of 10% (and in 2021 will be in single digits). Courtesy of Twitter user @fly4dat, here’s a great chart showing that: 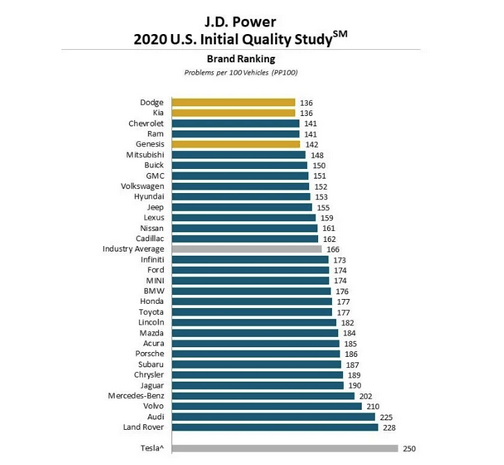 …while the latest What Car? survey shows similar results with Tesla finishing #29 out of 31, and Consumer Reports ranks it 23rd out of 30 brands (and that’s with many stockholder/owners undoubtedly underreporting their problems—the real ranking is almost certainly much worse). 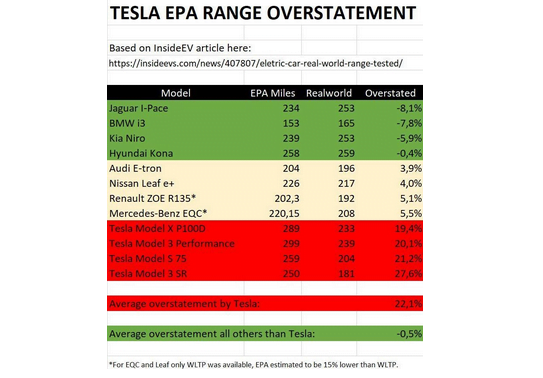 Regarding safety, Tesla has been hit with at least one well-documented sudden acceleration class action lawsuit and for years knowingly sold cars that it knew were a fire hazard. And of course it continues to sell and promote its hugely dangerous so-called “Autopilot” system, which Consumer Reports has completely eviscerated; God only knows how many more people this monstrosity unleashed on public roads will kill, despite the NTSB condemning it as dangerous. In fact, Teslas have far more pro rata (i.e., relative to the number sold) deadly incidents than other comparable new luxury cars; here’s a link to those that have been made public. In other words, when it comes to the safety of customers and innocent bystanders, Tesla is truly one of the most vile companies on Earth. Meanwhile the number of lawsuits of all types against the company continues to escalate– there are now over 800 including one proving blatant fraud by Musk in the SolarCity buyout (if you want to be really entertained, read his deposition!).

Finally, Tesla has the most executive departures I’ve ever seen from any company; here’s the astounding full list of escapees. These people aren’t leaving because things are going great (or even passably) at Tesla; rather, they’re likely leaving because Musk is either an outright crook or the world’s biggest jerk to work for (or both). And in January Aaron Greenspan of @PlainSite published a terrific treatise on the long history of Tesla fraud; please read it!

So here is Tesla’s competition in cars (note: these links are regularly updated)…

Porsche Macan EV to get Taycan platform and tech

2021 Audi Q4 e-tron Will Be the Cheapest Electric Audi

Mercedes EQC electric SUV available now in Europe & China and in 2021 in the U.S.

Volkswagen ID.4 electric SUV revealed with up to 323 miles of range

Nissan vows to hop back on EV podium with Ariya

The BMW i4 EV Will Be the Most Powerful 4-Series

Rivian electric pickup truck- funded by Amazon, Ford, Cox & others- is on the way

New all-electric Renault SUV to arrive in next 18 months

Meet the Canoo, a Subscription-Only EV Pod Coming in 2021

Lexus to launch EV in China taking on VW and Tesla

PSA to accelerate rollout of electrified vehicles in China

Mazda to roll out China-only electric vehicles by 2020

CHJ Automotive begins to accept orders of Leading Ideal ONE

Infiniti to launch Chinese-built EV in 2022

Tesla has a self-driving strategy other companies abandoned years ago

Hyundai and Kia Invest in Aurora

Nvidia and Mercedes Team Up to Make Next-Gen Vehicles

Daimler’s heavy trucks start self-driving some of the way

Mobileye and Geely to Offer Most Robust Driver Assistance Features

Baidu kicks off trial operation of Apollo robotaxi in Changsha

DiDi completes over $500M fundraising round for its autonomous driving subsidiary

BMW and Tencent to develop self-driving car technology together

Solid-state batteries on track at Toyota

Volta is rolling out a free charging network

E.ON and Virta launch one of the largest intelligent EV charging networks in Europe

Smatric has over 400 charging points in Austria

Allego has hundreds of chargers in Europe

BP Chargemaster/Polar is building stations across the UK

Instavolt is rolling out a UK charging network

Aral To Install Over 100 Ultra-Fast Chargers In Germany