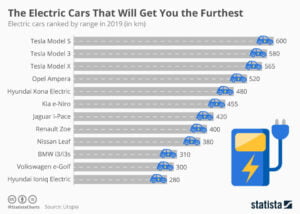 That electric vehicles are the future has been known for some time, but it seems as though the auto industry in general is only now getting to grips with the reality of the situation. The greater competitiveness within this space is not good news for Tesla (TSLA), which has long been touted by its supporters as the trailblazer in the electric vehicle sector.

The Auto Industry Is Getting Serious About Electric Vehicles

Despite footage of Elon Musk and Volkswagen (VLKAF) chief Herbert Diess driving the new fully-electric Volkswagen Electric ID.3 model, the likelihood that Tesla will become more involved with its chief competitor in the electric vehicle market is remote. What the interaction between Musk and Diess does illustrate is that the traditional auto industry is finally getting serious about electric vehicles.

The trend is towards a switch from petrol to electricity, and this switch requires batteries and software to permit the batteries to work in sync with motors. Multiple firms, such as AMETEK (AME), Johnson Electric (JELCF), and WEG (WEGZY) are making electric motors. Ninety-one factories are expected to produce battery cells by 2028, and half of these are already producing now. Overall, the global electric vehicle battery is currently valued at $30.7 billion, and is estimated to reach $87 billion by 2027. Furthermore, the electric car market itself was valued at $162.34 billion in 2019, and is projected to grow to $802.81 billion by 2027.

Tesla, specifically, would seem at first glance to be in pole position to benefit from this projected growth. In July it overtook Toyota (TM) as the most valuable carmaker by market capitalization, a reflection in investor confidence in the future of electric vehicles overall – and in the less-certain prospect that Tesla will continue to lead the pack.

Tesla currently has the advantage of holding 16% of market share in the global passenger electric vehicle market, it has been manufacturing electric vehicles at scale longer than any other company, and sells more of them than any other company – of the top ten U.S. plug-in cars sold in 2019, three of the ten were Tesla models. Furthermore, sales of the Tesla Model 3 outpaces its closest rival (Toyota’s Prius Prime) by over 135,000 units.

Tesla benefits from the fact that its electric cars have the greatest range – the Model S, Model 3, and Model X can travel from 565-600 kilometers on a single battery charge, and are the top three ranked electric cars by range as of 2019. 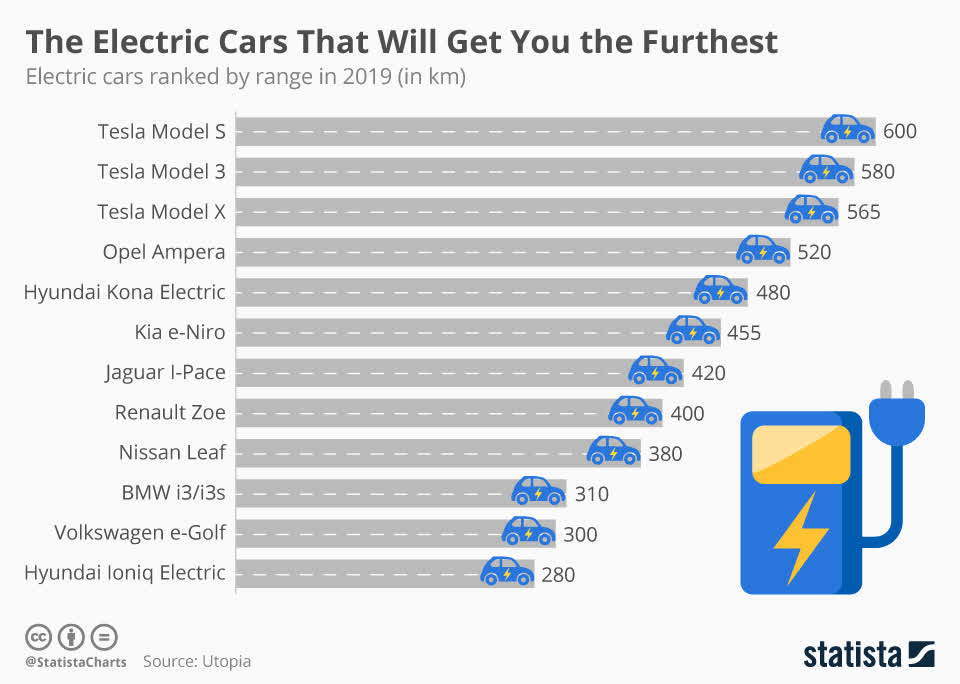 These factors seem to augur well for Tesla’s long-term prospects, as does the fact that it looks set to post a profitable year for the first time in its history. Since it went public in 2010, and according to figures going back to at least 2006, Tesla has reported consistently rising revenues in tandem with consistent net losses.

Figures collated from 10-K reports available on the SEC website and on Tesla’s investor relations page.

At first sight, however, it appears as though Tesla has finally turned a corner and become profitable.

Long-Term Issues That Tesla Has To Overcome

Tesla hopes to maintain this edge through sales of electric cars, and with the line-up being extended to lorries and pick-ups. Battery production will also aid Tesla’s bottom line, not merely in sales but also in extending the firm’s cost advantage. However, despite the rosy picture painted hitherto, there are a vast number of long-term issues that the firm still has to overcome.

Tesla bulls who point to Tesla’s current pole position in the electric car market as a strong competitive advantage would do well to remember that of all car sales worldwide in August 2020, electric car sales accounted for only 3.8% of market share. With tightening emissions regulations and reduced battery costs the market share for electric vehicles will increase, but Tesla’s lock on pole position going forward is far from guaranteed. The traditional competitors, such as Volkswagen with its Electric ID.3, Toyota with its Prius Prime, Ford with its Focus Electric hatchback, General Motors with its Chevrolet Bolt EV, Nissan with its Nissan Leaf, are equally poised to carve a significant slice of the electric vehicle market going forward.

All of Tesla’s competitors have been profitable for long stretches and have significant global reach – two qualities that Tesla cannot lay claim to. Its limited presence outside the U.S. will severely impact its ability to compete with the likes of Toyota, which enjoys a far greater international presence. Furthermore, Tesla is not in excellent financial shape to counter the challenge that these larger competitors pose. With long-term debt of $11.52 billion slightly off-setting a net worth of $11.34 billion, Tesla’s long-term finances are not great, and its sales cannot compare with its competitors, who are making serious incursions onto its “turf.”

Figures collated from most recent financial statements for each auto company. Toyota and Volkswagen figures converted by XE Currency Converter.

Volkswagen will spend €60 billion ($70.92 billion) on developing electric vehicles, hybrid vehicles and digital technologies by 2024. Daimler has forged a partnership with chip maker Nvidia (NVDA) to develop a chip-and-software program that would allow vehicles to drive themselves – a move designed to counter Tesla’s own custom-designed chips. The larger firms are also able to commit cash to startups, last month General Motors announced its intention to acquire an 11% stake in electric-lorry company Nikola (NKLA), while Ford has invested in pickup manufacturer Rivian (RIVN).

Competition is not restricted to the traditional firms – Chinese firms such as Li Auto (LI), NIO Limited (NIO), and XPeng Inc. (XPEV) already are listed on the American exchanges (Li Auto on the NASDAQ, NIO and XPeng on the NYSE). All three firms have three advantages: the cheap Chinese labor force; the large Chinese domestic car market; and convenient access to prominent battery manufacturers such as BYD Company Limited (BYDDF) (BYDDY) and Contemporary Amperex Technology Limited, or CATL – the latter being the largest battery manufacturer in the world (and one which is a Tesla supplier).

All told, the diverse range of competitors that Tesla faces – all of whom are better placed financially and internationally – calls into question its ability to maintain its hold on pole position in the electric vehicle market. Its financial position does not suggest that it can effectively compete with either the established auto players or with the rising Chinese firms. This uncertainty makes its current valuation untenable.

So while the electric vehicle market will unquestionably grow in the years ahead, Tesla’s lead in that market is far from unquestionable. This makes it unwise to recommend Tesla as a prospective investment at this time, especially as it currently trades at a premium to both the transportation equipment manufacturing sub-sector and to the S&P 500 (SPY). That premium is too high in light of the uncertainty surrounding Tesla’s long-term prospects.

The post Tesla’s Competitive Advantage Will Be Eroded appeared first on ValueWalk.