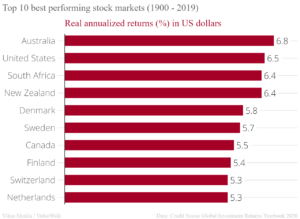 People often say investing is a long-term game. So, let’s talk about long-term investing. The “buy and die” kind of long-term. How much money you would have today if your great-great-grand father invested $1 in the US stock market in the year 1900? The US market has delivered 6.5% real annualized returns (after inflation) since 1900. It means the $1 would be worth $3,806 at the end of 2019. One country has performed even better than the US. Here we take a look at the top 10 best performing stock markets since 1900.

Business and economy has undergone massive transformation over the last 120 years. Back in the year 1900, railroads accounted for 63% of the United States’ total stock market value. Today railroads are a negligible component in the S&P 500 index. When your great-great-grand father invested $1 in 1900, he had no clue that there would be cars, smartphones, airplanes, music streaming, movies, online gaming, cloud computing, and all that stuff.

Equities have far outperformed other assets

In the last 120 years, there have been two World Wars, a Cold War, numerous economic crises, and a lot more. But the stock markets have only gone up in the long-term. Credit Suisse Research Institute joins hands with the London Business School and Cambridge University to publish the annual Credit Suisse Global Investment Returns Yearbook.

The Yearbook tracks the historical returns and risks from investing in stocks, bonds, cash, and currencies in 23 countries since 1900. These 23 countries represented 98% of the world’s stock market in the year 1900. Even today, they cover 91% of the global equity market, according to Credit Suisse. India was added to the database in 1955 while China and Russia were added more recently in 2013.

These are the best performing stock markets since 1900. The returns are adjusted for inflation and in the US dollar terms. The real returns in the local currency of a country could be higher or lower depending on the exchange rate. For instance, South Africa has delivered 7.2% annualized returns in its local currency, but a relatively lower 6.4% when converted to the US dollar. 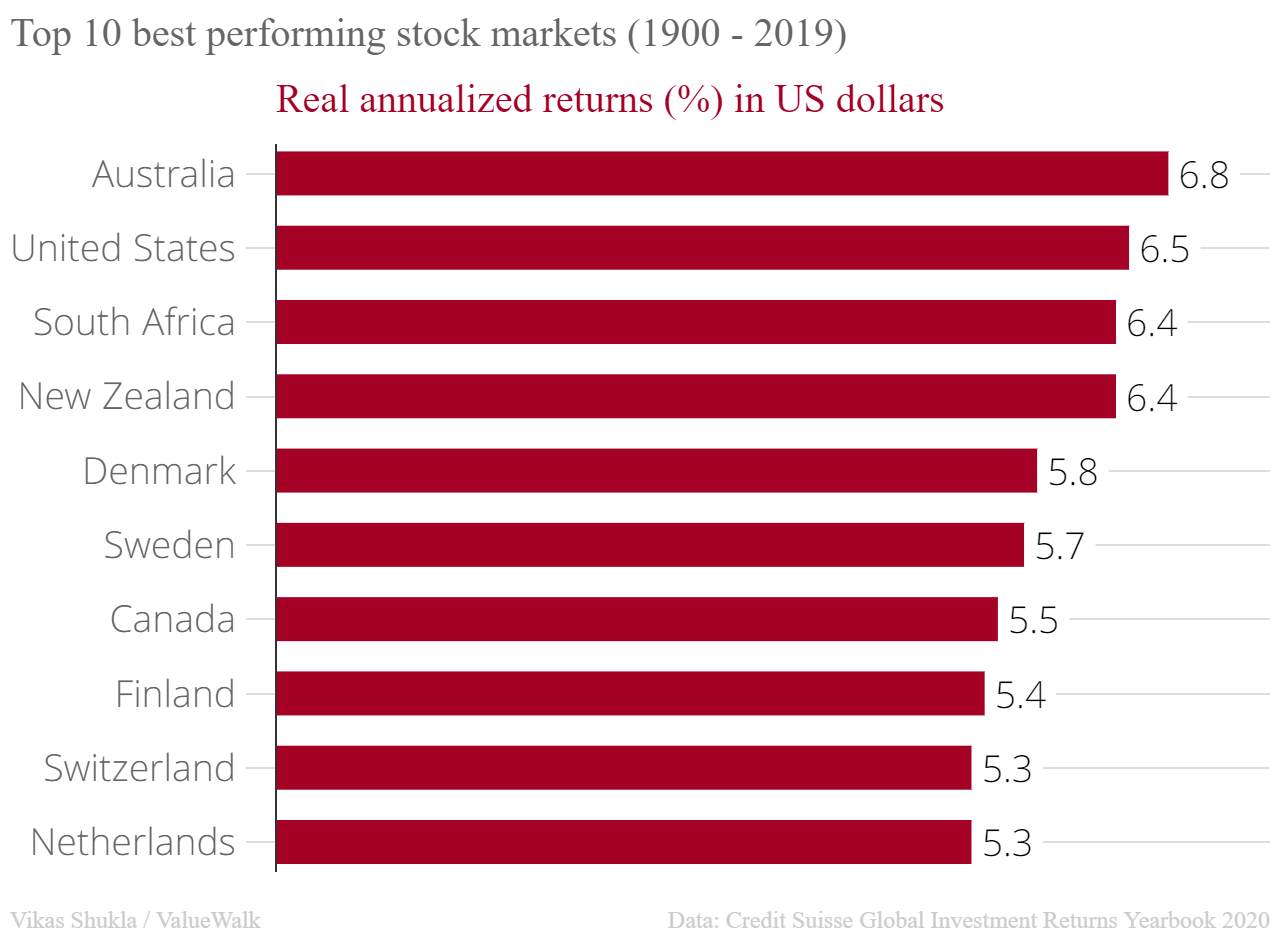 According to the report, equities have far outperformed bonds in the long run. Between 1900 and 2019, global stock markets have compounded at a real (after inflation) rate of 5.2%. Bonds have delivered only 2% annualized returns in the same period. Bills have performed even poorly at just 0.8%.

It means global stock markets have outperformed bills by 4.3% annually. The gap in returns compounded over a period of 120 years. If person A invested in global equities and person B invested the same amount in bills and they both stayed invested for 120 years, person A would have 165 times more money than person B. Remember all the figures are adjusted for inflation.

Notably, Japan was the world’s second-best performing stock market between 1900 and 1939. But Japanese equity markets lost more than 95% of their real value during the Second World War.

Why Australia is the world’s best performing stock market

The United States is currently the world’s largest equity market. It accounts for a little over 54% of the world’s total free-float market capitalization. Japan is a distant second at 7.7%. Despite the might of the US markets, it’s Australia that has delivered the best performance over the last 120 years.

The top three best performing stock markets – Australia, the US, and South Africa – are all commodity-rich nations. Their natural resources helped them withstand the global turbulence. Over the last century or so, all three of them have successfully diversified their economies to other industries such as technology and financial services.

According to Credit Suisse experts, there is no one reason why the Australian equity markets have performed so well. The country is rich in natural resources. It suffered minimal damage during the Second World War due to its geographical location. Also, the country’s strong banking system coupled with the services-based economy has helped it weather the financial crises better than the US and other countries.

Australia has also been a favorite destination for international investors due to low corruption, fair and transparent regulations, and a well-developed education system. Despite the COVID-19 pandemic, the Australian equity markets have held up pretty well.

Finally, past performance is not indicative of the future results. There is no guarantee that equity markets that have done well in the last 120 years will also perform well in the coming years.