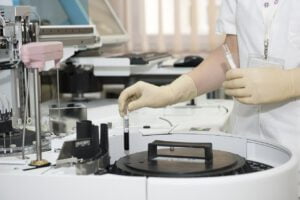 Pharma and biotech companies have significantly ramped up their R&D spending in recent months to find a treatment or vaccine for the novel coronavirus. But they had been spending billions of dollars on research and development (R&D) even before the deadly pandemic. R&D is the backbone of the pharma industry. On average, pharmaceutical companies worldwide spend 17% of their revenue on research and development initiatives.

Here we take a look at the top 10 pharma companies with the highest R&D spending in the year 2019. Their R&D expenditure in 2020 will likely be even higher. The ranking is based on data from Evaluate, FierceBiotech, and the financial statements of pharma giants.

In 2019, oncology research was the biggest focus of drugmakers. They are all trying to find effective treatments for cancer. In 2020, spending on coronavirus treatments could overtake oncology expenditure.

The British pharmaceutical giant generated $41.55 billion revenue in 2019 and spent 13.5% of it on R&D. Last year, GSK joined hands with the US drugmaker Pfizer to combine their consumer health businesses into a new joint venture. It will allow the London-based company to focus on innovative drugs.

AstraZeneca was recently in the news for proposing a merger with Gilead Sciences. It has since ditched the plan. Had the merger gone through, it would have been the biggest deal in the pharma industry ever. Anyway, AstraZeneca spent a staggering $6.06 billion on R&D last year, which is nearly 25% of its revenue. The pharma giant can afford such a high R&D spending thanks to the strong sales of its cancer drugs Tagrisso, Lynparza, and Imfinzi.

New York-based Bristol-Myers Squibb spent 23.6% of its $26.1 billion revenue in 2019 on R&D. BMS has a vast portfolio of prescription drugs and biologics. Last year, the company acquired Celgene in a $74 billion deal, which develops drugs for autoimmune diseases, cancer, allergies, and inflammatory disorders.

AbbVie was carved out of Abbott Laboratories in 2013. It specializes in oncology, virology, and immunology. The company spent $6.41 billion on research and development last year, which is about 20% of its $33.2 billion revenue. Its R&D spending in 2020 is expected to be significantly higher, thanks to the $63 billion acquisition of Allergan. AbbVie’s patent on the blockbuster drug Humira is set to expire in 2023.

Sanofi spent 16.7% of its 2019 revenue on research and development initiatives. The French pharmaceutical giant has doubled down on cancer, immunology, and rare diseases research, shifting its focus from joint development of drugs with other companies to in-house development. Sanofi is also developing a coronavirus vaccine.

Pfizer is one of the largest pharmaceutical companies in the world with revenues of $51.8 billion. Its 2019 R&D spending was $8.65 billion. In the last few years, many of Pfizer’s drugs have gone off patent. The company is spending heavily on drug discovery and development, aiming to bring 15 new drugs to the market between 2018 and 2022. Last year, Pfizer acquired Array Biopharma for $11 billion, which gave it access to Array’s approved drugs for skin cancer and many others in the pipeline.

Merck develops drugs, biologics, and vaccines in therapeutic areas such as oncology, cardiovascular, and endocrinology. The company generated $46.84 billion revenue in 2019, and spent 21.1% of it on R&D. Its Keytruda, a cancer immunotherapy drug, has turned out to be a blockbuster. It’s used in the treatment of lung cancer, stomach cancer, melanoma, and Hodgkin lymphoma.

Johnson & Johnson is more than just a pharmaceutical company. It has three business segments – pharma, medical devices, and consumer products. Johnson & Johnson’s R&D spending rose 5.3% YoY to $11.36 billion in 2019. The company posted a revenue of $82.1 billion last year. J&J received new regulatory approvals for its blockbuster drugs Imbruvica and Darzalex. It is also the most valuable pharma brand in the world.

In February 2019, Roche announced the acquisition of gene therapeutics company Spark Therapeutics for $4.3 billion. The pharma giant’s R&D spending last year was a staggering $12.06 billion, roughly 19% of its revenue. The Swiss drugmaker is investing heavily in the discovery of new drugs as patents on many of its blockbuster products have expired in recent years. Roche is also set to lose patent on Lucentis this year.