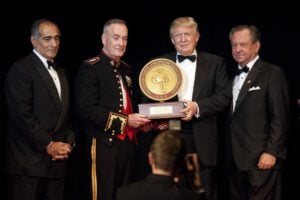 Trump’s reported instruction to the U.S Treasury Secretary to ‘go after Bitcoin‘ highlights how “backward-looking and out-of-touch” he is, says the CEO of one of the world’s largest independent financial advisory and fintech organizations.

In ‘The Room Where It Happened’, Bolton says he heard Donald Trump tell Treasury Secretary Steven Mnuchin to “go after Bitcoin.”

Mr Green says: “It is highly likely that Trump did, indeed, launch an attack on Bitcoin. Last summer, he went on a Twitter tirade lambasting the world’s largest cryptocurrency.

“Assuming the instruction to the Treasury Secretary is true, it highlights how backward-looking and out-of-touch the current U.S. President is on this issue.”

He continues: “Cryptocurrencies, such as Bitcoin, are becoming almost universally regarded the future of money.

“Why? Because of the staggering pace of the digitalization of our lives and cryptocurrencies are digital by their very nature.

“They’re also borderless, making them perfectly suited to the world of commerce, trade, and the movement of people.”

He goes on to add: “The serious coronavirus-triggered global recession, like the crash of 2008/2009, has created a loss of trust in governments, central banks and legacy financial institutions, leaving the door open for the immutable blockchain technology that powers cryptocurrencies.

“In addition, it comes down to demographics. Younger generations, such as Millennials and Gen Z, are digital natives and more likely to hold crypto assets. If demographics are on your side, the future probably is, too.

“Another important indicator is that institutional investors are increasing their exposure to crypto all the time, bringing with them their institutional expertise, clout and capital.”

The deVere CEO concludes: “For the leader of the world’s largest economy to want ‘to go after’ Bitcoin paints him as King Canute trying to turn back the tide.”

The post Trump’s reported Bitcoin instruction shows he is out of touch? appeared first on ValueWalk.