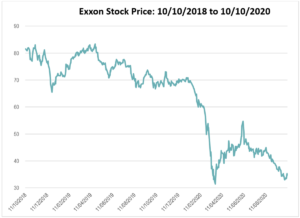 Most stock valuation chatter on the internet focuses on companies with great growth opportunities like Zoom, Wayfair and Peloton or well known companies whose stocks have outperformed like Apple and Amazon. Here we take a look at the other side of the coin and present a valuation of Exxon Mobil Corporation (NYSE:XOM). Needless to say, the past few years have not been happy ones for Exxon. Plunging oil prices, caused by a combination of Covid, a growing worldwide recognition of the need to transition to sustainable energy, and a variety of other headwinds have caused Exxon’s stock price (charted below) to drop from a high of $83.38 to a recent low below $33.00. 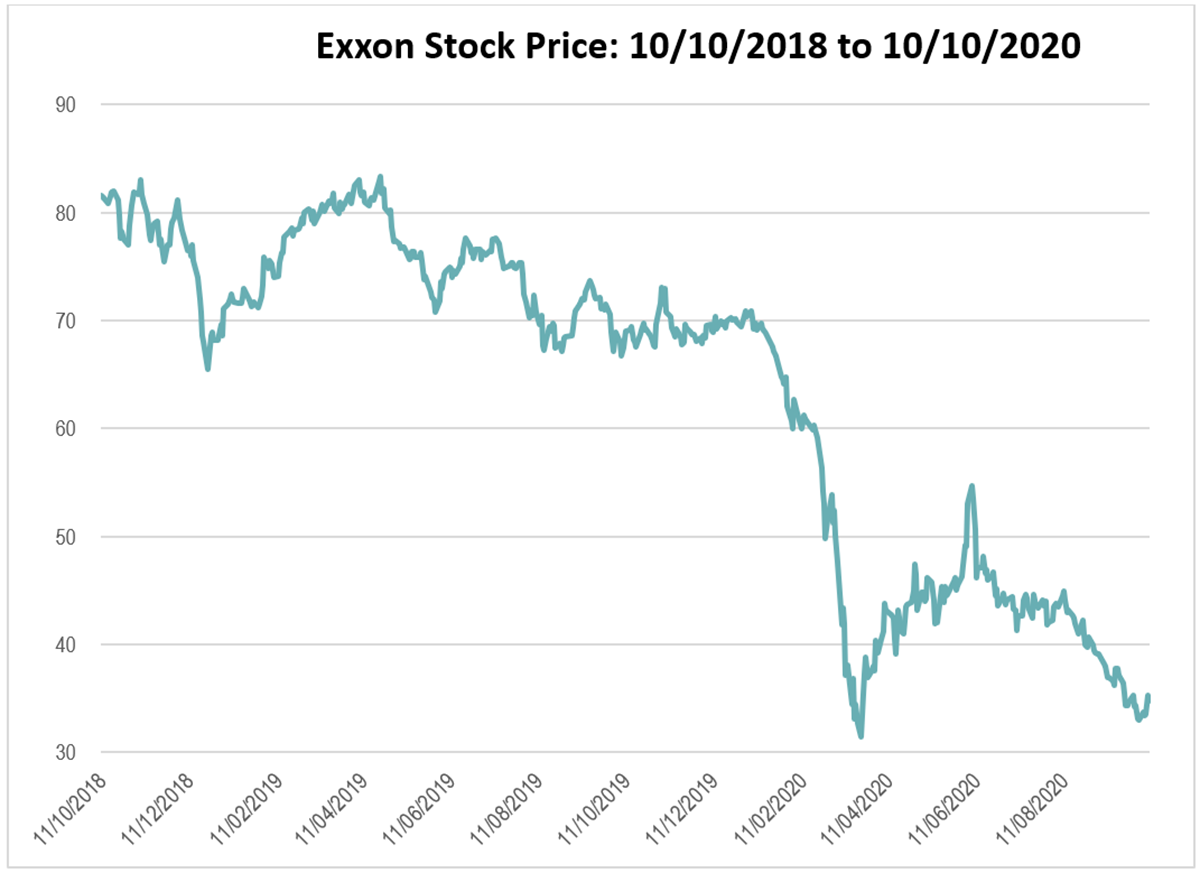 But all this bad news and the associated dim outlook for the company does not mean that Exxon is necessarily a bad investment. Although academic writing constantly reiterates that investment decision making requires comparing price with value that dictum is often overlooked in the heat of the moment. There is little doubt that Exxon faces a troubled future, but is it more or less troubled than the outlook impounded in the market price? The only way to answer that question is to undertake a fundamental valuation analysis.

At the Cornell Capital Group, we have developed a discounted cash flow (DCF) valuation template that can be used to value companies. We began with a DCF model developed by Aswath Damodaran. We then simplified the inputs to make it easier to implement. Finally, we added an additional element to divide the estimated value into three components as given by the equation

The first component, the book value, can be read off the balance sheet. The second component, the value of predictable earnings, is based on the assumption that the company meets analyst forecasts for the current year and the following year. In all future years beyond year two, the earnings are assumed to be equal to year two earnings. The final component, the speculative value, equals everything else. The speculative value is calculated by starting with the stock price and subtracting the book value and the value of predictable earnings. An electronic version of the model can be downloaded for free here. The detailed numbers for Exxon are also included in the download.

On October 10, 2020 when we developed the Exxon model, the market price of Exxon’s stock was $34.90. Rather than detail all the assumptions that are contained in the spreadsheet, I jump to the conclusion of the DCF valuation – a value for Exxon of $39.11 per share. It is worth noting that the estimated value is based on the assumption that the company is in long-term decline. However, the assumed decline incorporated in the model is apparently less than that assumed by the market because the estimated value exceeds the market price. In addition, the first two components of the value breakdown, account for the entire value of Exxon, there is no speculative value. As a comparison, Zoom and Exxon have almost equal market capitalization, but whereas Exxon has no speculative value, almost the entire value of Zoom is speculative.

Based on the estimate of fundamental value, it appears that Exxon is a buy despite its dim prospects, but a word of caution. As famed financial economist Fischer Black was fond of noting, DCF models are sensitive to the assumption employed. For instance, with apparently minor alterations of our assumptions the estimated value of Exxon can drop to $22 or rise to more than $60. It is no wonder why Benjamin Graham demanded a margin of safety between price and estimated fundamental value before he made an investment.

Given the sensitivity of the estimated value to variation in the assumptions, it is tempting to conclude that DCF models are of little use in making investment decisions, but that conclusion is wrong. The simple fact is that is investing is difficult. It requires understanding a business well enough to determine the best inputs into a DCF model. Shortcuts simply hide the complexity and increase the probability of error. What Churchill said of democracy holds for DCF valuations; it is the worst form of investment decision making except for all other forms that have been tried from time to time.