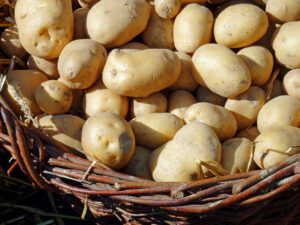 Excerpted with permission of the publisher, Cambridge University Press, from Feeding the People: The Politics of the Potato by Rebecca Earle.

While Cobbett castigated the potato as a tool of capitalist exploitation, capitalists took a different view. For them, the potato was an obstacle to market discipline, not its enabler. Advocates of liberal capitalism looked forward to a bright future of rational economic practice and the sensible exchange of labour as one commodity among many. From this perspective the prolific potato enabled too much autonomy from the market. Just as William Petty, the seventeenth-century political philosopher, believed that potatoes allowed the Irish to lead a life of idleness, so nineteenth-century liberals complained that potatoes facilitated exactly the sort of uneconomic behaviour that they hoped to eradicate. Cobbett and the liberals thus disagreed profoundly on whether the potato enabled or impeded the spread of capitalist market relations. All, however, concurred that Ireland provided the clearest illustration of their
divergent analyses.

During the eighteenth century Ireland had often been heralded as the premier example of the potato’s beneficent power to increase the population of healthy, industrious workers. During his travels around Ireland in the 1770s, the English agricultural writer Arthur Young praised the potato as a nutritious food that encouraged population growth and general good health. The fact that it insulated Irish labourers from the market was a further attraction. English workers, Young observed, were at the mercy of grain prices, as most purchased their food rather than growing it themselves. In Ireland, in contrast, ‘the poor have nothing to do with prices, they depend not on prices, but crops of a vegetable very regular in its produce’, namely the potato. ‘Which therefore is the best off?’, Young asked: the Englishman, or the Irishman with his potato bed and cow. For Young, the answer was clear.

By the 1820s, the potato’s capacity to sustain families independent of market conditions looked less attractive to some observers. As the historian David Lloyd has argued, this transformation reflects changes in the British economy and in statecraft. As Britain’s economy moved from a fundamentally agrarian model towards a more industrial, capitalist framework, the eighteenth-century emphasis on building a self-sustaining labour force was replaced by the conviction that wealth and power derived from a smoothly functioning economic system, not simply from a larger population of diligent workers. The market economy demanded not merely healthy people, but a particular organisation of society around specific forms of waged labour and relations between employers and the workforce, and the dominance of the market in setting prices and wages. Potatoes, Lloyd noted, were increasingly associated with ‘moral and political as well as economic characteristics that are recalcitrant to capitalist development’. The autonomous, potato-eating Irish labourer praised by Young had become ‘a scandalous and potentially destabilising alternative to the economic and political forms that the reproduction of capital requires’.

The Principles Of Population

The writings of Thomas Robert Malthus are a barometer of this change. Malthus, who was born in 1766 in Surrey, spent most of his adulthood as the professor in history and political economy at the East India College, an institution intended to educate future colonial administrators. A minister in the Church of England, he also delivered sermons at the College, and over his life published a series of provocative and widely discussed works on economic and political matters, which reflected both his moral convictions and his thoughts on the nature of economic organisation. By the 1830s his ideas were sufficiently influential to underpin the substantial reduction in entitlement to poor relief enshrined in the 1834 New Poor Law, which limited parish relief to a narrowly defined group of ‘deserving’ poor – the bill that Cobbett had denounced as an impudence to end all impudences.

The work that attracted the most fame was Malthus’ essay on population, first published in 1798 and repeatedly printed, with substantial revisions, in subsequent decades. The Essay on the Principles of Population captured well the growing doubts about the potential of a healthy population alone to generate economic growth. Malthus’ desire to write the essay was apparently prompted by conversations with his father about human society’s capacity for happiness, a matter on which the younger Malthus took a gloomy view. His overall aim was, in the words of the historian Alessandro Roncaglia, ‘to assert the uselessness of any attempt at improving the situation of the great mass of the workers’.44 Malthus maintained that since the size of the population was limited by the supply of food, any effort to ensure that working people were amply fed would result in unsustainable population growth, and would lead inevitably to some sort of collapse. The poor laws, he explained, ‘may be said therefore in some measure to create the poor which they maintain’. Their abolition would discourage the poor from having children, and thereby ‘promote the happiness of the great mass of mankind’.45 The essay’s popularity, measured by the number of subsequent editions, as well by Malthus’ later success in shaping public policy, reflects its ability to crystallise new ideas about the relationship between political stability, economic success and the size of the population.

The Natural Limit Of The Potato System

Unsurprisingly, Malthus was unenthusiastic about potatoes. Because the potato was so much more productive than wheat, it enabled an unprecedented rate of population growth, but unlike eighteenth century writers Malthus did not view this as an advantage. He believed that the increase in the Irish population enabled by the potato system would find its natural limit; an abundant supply of food guaranteed not a robust population but rather an impending catastrophe. A failure in the potato crop, which he regarded as highly probable, would result in circumstances ‘beyond all comparison, dreadful’, he wrote in 1803.

Like Cobbett, Malthus associated the potato with degradation. The potato, together with the ‘ignorance and barbarism of the people’, had combined with squalid living conditions, inadequate clothing and poor hygiene to maintain the Irish population in a depressed and miserable state. Were the same system extended to England, ‘the rags and wretched cabins of Ireland would follow’. An increase in potato consumption, and the spread of potato grounds would constitute ‘the most cruel and fatal blow to the happiness of the lower classes of people in this country, that they had ever received’. In various essays he dissected the ‘radical evils of the use of potatoes’ as a staple, and linked their widespread consumption to the backward and degraded state of the Irish labourer (although he by no means held the potato uniquely responsible). The cultivation of potatoes by Catholic labourers led to unsustainable population increase, but did nothing to keep down the price of other commodities, and so prevented rural workers from purchasing any of the other goods that they needed to live a commodious life. For Malthus, potatoes were bad for the Irish, and they set an ominous precedent for people in other countries. Nothing good could possibly come of an increase in their consumption.

The post What Progress Can One Expect From A People Who Eat Potatoes? appeared first on ValueWalk.