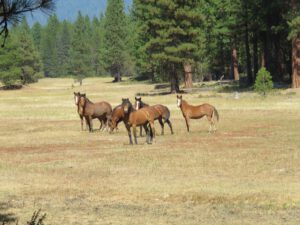 Benefiting Flora And Fauna: A Review Of Wild Horse Symbiosis

In a recent article published in the Pagosa Daily Post titled; ‘FIELD NOTES: Lessons Learned from Colorado Wildfires, Part Two’, we learn that the Bureau of Land Management (‘BLM’) is having difficulties in reseeding and restoring wildfire damaged public lands.

It turns out that nature already has that figured out. The only problem is the BLM is too myopic in their approach to look and see how nature does it so perfectly.

Unlike ruminants (cattle and sheep), which have complex stomachs that digest virtually all the native plant seeds they eat, wild horses have a single stomach and virtually pass all the native plant and grass seeds they eat back onto the ground in their nutrient and micro-biome rich droppings, which restore wildfire damaged soils. The droppings of wild horses provide a perfect humus substrate for the enclosed native seeds to germinate and grow.

In fact, I believe I may have pioneered the use this evolved wild horse trait on my own ranch to spread the seeds of beneficial flora by feeding the local horses such seeds at feeding stations.

Few people actually study the anatomy and morphology of the large-bodied herbivores that are grazing public lands and wilderness areas. These studies are critically important in regard to intelligent land management, especially in the restoration of wildfire damaged wilderness lands.

The evolved hoof of a native species American wild horse has a much greater surface area in proportion to body weight than do invasive species cattle.

Here are the simple mechanics resulting from the evolutionary hoof design, and the difference between the evolved hoof design of native species horses of North America, and cattle (evolved in Africa), and how each hoof design uniquely impacts the soils in our North American forests, range-lands and riparian areas.

The photo above shows the underside of a cow’s hoof, which as we see, has what are termed as pointed claws. Like the point of a pick-axe tool, the points on these cow claws are very effective at penetrating deeply into soils, especially soft or wet soils.

We also note that these claw-like hooves present a relatively small surface area (increased pounds/square inch loading) upon which the entire weight of the cow is supported.

The photo above is an example of what a cow’s claw does in soft pasture as a result of the shape and high ground loading (weight/surface area of claws). As we see, the cow that made this imprint (weight est. 800-900 pounds) penetrated the soil at least five inches deep. This level of soils disturbance in wilderness areas is not ecologically acceptable.

Now we turn to the evolutionary design and effect of the horse’s hoof on soils.

In the photo above we see the underside of a horse’s hoof. It is distinctly different from the cow’s claw, and in many ways, protects the soils where they tread.

First off, the shape of a horse’s hoof is as we see rounded and the surface area is relatively large in proportion to their body weight (lower ground loading in pounds/square inch). The horse’s hoof is dished-in on the underside (concave) and that shape tends to trap water and air under the hoof and allows it to ‘float’ hydraulically on the soil instead of piercing the soil like the pick-shaped cow claw.

As we see, the hoof in the photo above has a lot of surface area compared to the cow claw, and that greater surface area distributes the weight of the horse over more area on the soil, which limits the penetration of a horse’s hoof into the soil. Thus we have less soils disturbance via the significantly lower ground loading as measured in pounds per square inch (PSI).

In the photo above we clearly see the horse hoof makes an impression in the soil of less than one-inch deep (same area/soil which contained cow imprints). The horse that made this imprint in the photo above weighed about 800-900 pounds (similar to the weight of a cow), which is a typical weight for an adult wild horse.

Chronic wasting disease (‘CWD’) is a prion (protein) based disease in cervids (deer, elk, etc.), which means there is no virus or bacteria involved. It is 100% fatal in all the species that can contract this disease, including humans.

CWD is spreading fast and is a serious concern for wildlife managers, some of who are calling the disease ‘Zombie Deer Disease’.

When this prion disease infects a human is it called Creutzfeldt-Jakob disease (CJD), a rapidly progressive, invariably fatal neurodegenerative disorder believed to be caused by an abnormal isoform of a cellular glycoprotein known as the prion protein.

CJD is a neurodegenerative disorder with characteristic clinical and diagnostic features. This disease is rapidly progressive and always fatal. Infection with this disease leads to death in humans usually within 1 year of onset of illness.

When cattle contract this fatal disease, it’s called Mad-Cow disease or ‘BSE’ and in sheep and goats it’s called Scrapie.

Of great interest is the fact that wild horses have an evolved resistance to this prion disease, and their grazing of wilderness areas may among other benefits, help curtail the spread of CWD disease to other native herbivores.

The following is a quote from an official letter I received from Dr. Mark Zabel at the Prion Research Center:

“While prion diseases affect many mammalian species, scientists have shown that equine species are extremely resistant to prion disease. This observation supports the idea of deploying wild horses into CWD endemic habitats to graze and consume a potentially significant source of environmental CWD prions, preventing consumption by CWD susceptible cervids.

Since the large geographical distribution of CWD limits options for controlling its further spread, wild horses that are naturally resistant to CWD and consume huge amounts of forage could represent one of the few viable means of stemming the tide of CWD sweeping across the continent. Given the amounts of vegetative materials that can be consumed daily by a single wild horse (est. 30lbs/adult animal), equids may provide a potential solution to interrupt potential CWD vectors, while also aid in reducing dry vegetative materials that kindle wildfires.

Data accumulated through numerous studies correlate frequency, severity and duration of wildfires with a reduction or absence of large herbivores. Wild horse grazing would have the additional benefit of reducing brush and tinder responsible for igniting vast forest fires we see consuming landscapes and threatening homes and communities across the west every year. It certainly represents an idea that warrants further consideration. I support the implementation of a pilot study (www.WHFB.us) to explore this idea further. One opportunity could be to use of some or all of the ~40,000 wild horses currently being held in corrals by the BLM for this purpose”

[3] The U.S. Ninth Circuit Court of Appeals in California recognized wild horses as native species, explaining that BLM “establishes Appropriate Management Levels (“AMLs”) for populations of native species – including wild horses, burros, and other wildlife – and introduced animals, such as livestock.” In Defense of Animals, et al. v. U.S. Dept. Interior, et al., No. 12-17804, *6 (9th Cir. May 12, 2014). On Sep 28, 2011 (See Craters AR at 16698. Memorandum Decision & Order) The court addresses “sensitive” species pursuant to BLM’s 2001 Special Status Species Policy. This Policy requires that “sensitive” species be afforded, at a minimum, the same protections as candidate species for listing under the ESA. It called on BLM managers to “obtain and use the best available information deemed necessary to evaluate the status of special status species in areas affected by land use plans . . . .” See Policy at § 6840.22A. Under the Policy, those land use plans “shall be sufficiently detailed to identify and resolve significant land use conflicts with special status species without deferring conflict resolution to implementation-level planning.”

[4] Land Held Hostage: A History of Livestock and Politics; Thomas L. Fleischner, Ph.D. https://www.academia.edu/11886843/Fleischner_Land_Held_Hostage_A_History_of_Livestock_and_Politics Citation by: Professor Thomas L. Fleischner, Ph.D: “The most severe vegetation changes of the last 5400 years occurred during the past 200 years. The nature and timing of these changes suggest that they were primarily caused by 19th-century open-land sheep and cattle ranching.”

[6] Evolution of wild horses and cattle and the effect on range damage; https://www.horsetalk.co.nz/2017/09/25/evolution-wild-horses-cattle-effect-range-damage/

[9] Rewilding: Jozef Keulartz. “The removal of large herbivores has adverse effects on landscape structure and ecosystem functioning. In wetter ecosystems, the loss of large herbivores is associated with an increased abundance of woody plants and the development of a closed-canopy vegetation. In drier ecosystems, reductions of large grazers can lead to a high grass biomass, and thus, to an increase in the frequency and intensity of wildfires. Together, with the loss of a prey base for large carnivores, these changes in vegetation structures and fire regimes may trigger cascades of extinctions (Bakker et al., 2016; Estes et al., 2011; Hopcraft, Olff, & Sinclair, 2009; Malhi et al., 2016).” http://oxfordre.com/environmentalscience/view/10.1093/acrefore/9780199389414.001.0001/acrefore-9780199389414-e-545

[10] Wild horses: Are they being managed to extinction? William E. Simpson II; https://www.horsetalk.co.nz/2018/02/24/wild-horses-managed-to-extinction/

[17] Yes world, there were horses in Native culture before the settlers came https://indiancountrytoday.com/news/yes-world-there-were-horses-in-native-culture-before-the-settlers-came-JGqPrqLmZk-3ka-IBqNWiQ?