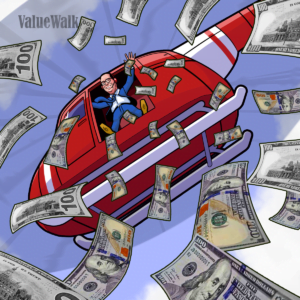 The Fallout of COVID-19… So Far

Probably one of the biggest headlines at this time are those concerning the Federal Interest rate. The Federal Reserve decided on Wednesday that interest rates shall remain capped at 0% for the foreseeable future. This news is announced amid the continued increase in unemployment claims, another 1.43 million of which are new this week. This adds to the total of approximately 30 million jobless Americans this year.

Additionally, the Gross Domestic Product (GDP) saw a 5% decline in Q1, then a 32.9% plunge in the 2nd Quarter. This indicates an almost 35% plummet of annual consumer spending. To put it into perspective, the GDP rarely shrinks by more than 10% every year in any given quarter. It has been this way since the end of WWII when the US began keeping track of it. The areas that declined the most were services with travel, tourism, medical care, restaurants, etc. Businesses reliant upon large groups of customers face the heaviest hits with quarantine. While spending on cars, groceries, and other household goods are up, clothes, gasoline, and other goods are down.

This is significant because it confirms that a full economic recovery will take longer than a few months. Although there was a slight mid-May recovery, the resurgence of the virus ultimately extended the trajectory of the US recovery.

But what exactly does keeping the benchmark interest rates at or near zero mean? The Fed wants to keep the economy at this level for “as long as it takes” to recover from COVID. What this means for the individual is that there are lower Federal interest rates for borrowers.

This benefits the American consumer, however only if your credit score is at 700 or above. Anything below that, your opportunities begin to dry up according to Bankrate’s Chief Financial Analyst, Greg McBride. Banks are unsure of the future of the economy, so lending programs are raising the bar for borrowers. Some aren’t even offering refinancing options at this time.

Credit card rates are also down to four-year lows around 16%. However, according to Bankrate, the Federal Reserve began lowering interest rates over a year ago. Most cards have a variable rate, but this flexibility links credit cards to the Fed’s benchmark rate. Since many are out of work, credit card issuers are shutting down accounts and lowering the credit limit, particularly for those accounts on track to delinquency.

Other interest rates currently down include:

Okay, so what about inflation? Since the Fed rates are low, more money is in circulation digitally, and the US debt is expanding, isn’t the dollar weakening?

In one way, yes. The dollar’s strength is faltering because it is responding to the US debt. There will most likely be a continual decline in the dollar’s strength, but BlackRock’s Rick Rieder says the decline might not be very sharp or very sudden. The dollar is finally responding to the soaring US budget deficit and growing debt. Congress is currently planning another package valued at $1 trillion+ to bolster the economy, but this will expand the debt too. It will take months, if not years, for the economy to pick itself up and recover. The growing conflict between China and the US, two of the biggest economies, also does not help.

All in all, the rate of inflation fell by 1.9% in the second quarter after an early increase in the year. Because most goods and services’ costs have fallen to incite consumer interest, inflation is expected to remain low until the end of the pandemic. Once regular life is back to normal, economists are concerned about the path inflation will take.

As the year continues, the resurgence of COVID in most of the 50 states means one step forward, more than two steps back. Corporate economist Robert Frick of Navy Federal Credit Union says the longer the pandemic goes on, the worse the damage will be.

How to Prepare for Economic Turmoil

What can you do to protect yourself from this economic crisis? Some people think hoarding their cash is the best idea. After all, you save now to buy later. However, this is not something most economists or financial advisors recommend. This is because the reward for saving is much lower at this time.

The average savings account rate is only 0.06% or lower. While the Fed does not control deposit rates, savings account rates seem to correlate with changes in the target federal funds rate. Since the Federal rate is at 0%…you can get a clear picture of why people might advise against only saving at this time.

Should You Buy Gold?

There are mixed opinions about gold. The gold price balanced around $1,950 per oz on 7/30 during the day. Overnight it rose to a high of $1991, and gold saw significant gains on the morning of 7/31 as reports that the U.S. PCE price index rose 0.2% in June. What the market heard from the Federal Reserve means there could be an even brighter future for gold. The Fed is not currently thinking about raising rates, therefore the loose monetary policy is not going to change anytime soon. Commerzbank, as a result, believes that the gold price will keep climbing. 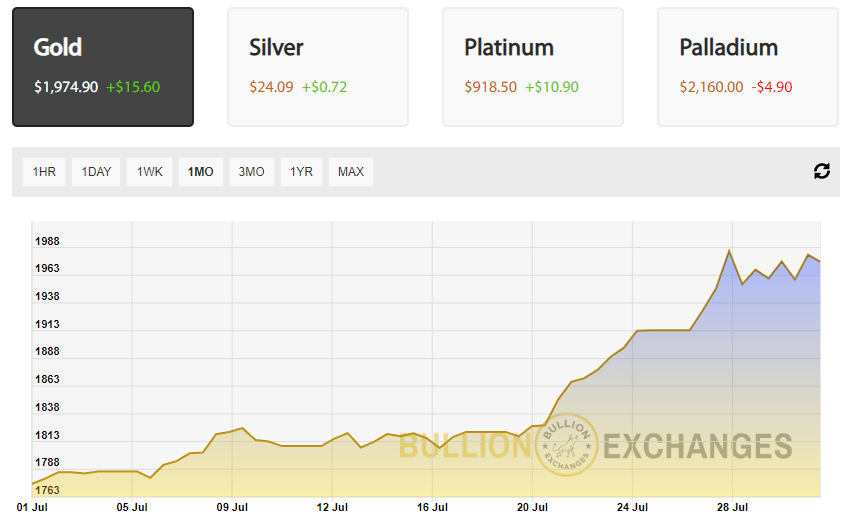 In the last recession back in 2012, gold prices stalled as stocks climbed. The difference back then was the fiscal deficit which constricted from 7-8% to slightly over 2% of GDP by 2015. Also, the dollar remained above a floor of 80 on the Dollar Index ever since. But, the deficit now is expanding significantly. Because of the pandemic, according to Morgan Stanley’s Jim Caron, the deficit will likely soar to 18% of GDP this year. Consequently, some are warning that inflation will hit, particularly because gold is rising.

However, inflation doesn’t hit all at once. While the gold price is at an all-time high, government bonds are at lows, and the GPD fell by 33% annualized for the last quarter. As a result, we will probably be in recovery for a while. Kelly Evans of CNBC says that the crisis can go one of two ways:

Her reasoning is that the last time inflation was a major concern, citizens called for fiscal restraint and voted accordingly. This could occur again, but if this push comes too early, Evans believes that gold, silver, and stocks will struggle as a result of the halted recovery.

Because no one knows the exact trajectory of the economic fallout, all you can focus on is your own wallet. Aside from keeping in good health, keeping your job (or getting one), and making sure you have enough money to survive, there are other steps you can take to protect and grow your assets.

The value of gold is most likely going to expand higher, and so too will silver as a result. Precious metals like gold and silver are highly liquid and easy to store. It is a great hedge against inflation, which investors turn to when inflation kicks in. So be ahead of the curve and consider adding precious metals to your financial plan now.

This is particularly crucial if you are buying stocks on the dip. Always keep diversification in mind since it’s always good to avoid putting all your eggs in one basket. Gold is a great asset class divergent from stocks, bonds, and others. Since it does not often react the same way to extraneous factors like stocks and bonds, gold is a great asset to hold onto.

The post How to Prepare for Economic Turmoil appeared first on ValueWalk.