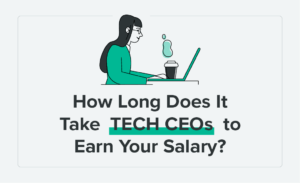 Mark Zuckerberg has come under fire recently for Facebook’s stance on publishing hate speech, in what is only the most recent scandal in the CEO’s messy rise to the top. Still, although he may have plenty to worry about in terms of his professional and personal reputation, the one thing Zuckerberg doesn’t have to worry about is money.

As of May 2020, the famously awkward 30-something is the third richest person in the world. According to Business Insider, as the world fell into disarray with the coronavirus’ economic impacts, Zuckerberg’s fortune rose to nearly $90 billion.

Mark Zuckerber’s Earnings Will Shock You

If you aren’t able to fully grasp just how much Zuckerberg makes, given this massive valuation, you can visit this CEO-wage-per-time calculator to get a better idea of how shockingly little time it would take for Zuckerberg to earn or pay off your financial statements.

As another point of reference, with only seven and a half minutes, Zuckerberg earns $31,172, the reported average American student loan debt. This is an especially rough hit to indebted grads who know that Zuckerberg famously dropped out of Harvard University to launch the social network.

One interesting consideration this calls to mind is the disparity between Zuckerberg’s earnings versus those of his own lowly employees: college interns. According to a CNBC report,  Facebook interns earn impressive wages of $8,000 a month, some of the highest of their rank in any field. Still, these tech wizzes’ salaries look microscopic relative to Zuckerberg’s. According to the calculator, Mark could earn the $8,000 sum in under two minutes.

This vast disparity speaks to the greater income inequality between regular Americans and their company’s CEOs. Most recently, this inequality has been a part of the national discussion with the simultaneous rise in earnings from CEOs despite the millions of layoffs of other Americans during COVID-19 economic unrest. Given the nationwide outcry about CEO’s massive earnings, it is also worth looking at some of the other gaps between CEOs and their interns using the calculator.

Interns at Adobe make an impressive $5,120 over the course of a summer. Still, they might feel somewhat less remarkable if they were to find out that Adobe CEO Shantanu Narayen could make what they earn in an entire summer in only 95 minutes, less time than it would take for her to get through a movie.

Perhaps the most shocking statistic comes for Amazon’s Jeff Bezos. The polarizing CEO makes a whopping $78.5 billion every year, meaning that he could make an Amazon intern’s summer salary of $6,400 in .04 minutes. That’s less time than it takes to count to “Three Mississippi”.

With the financial dominance of these CEOs’ major tech companies only growing, it can be assumed that their earnings will only grow. In the meantime, we can all compare our own earnings to that of the gawky genius Zuckerberg and his fellow billionaire buddies.

The post Mark Zuckerberg Could Pay Off Your Student Loans With Eight Minutes of Work appeared first on ValueWalk.