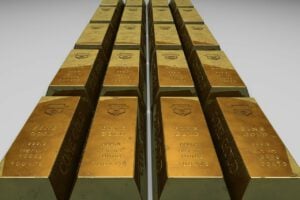 Central banks have been printing so much money lately that one firm suggests a possible return to the gold standard. In fact, based on the gold standard, the firm argues the implied gold price is higher than $7,000 an ounce. However, right now, it argues that gold prices are too high.

Gold is too expensive right now

In a note over the weekend, Invesco analysts considered whether gold is cheap or expensive. They said history suggests the yellow metal is expensive, but a return to the gold standard would mean that it’s very cheap. Their current estimate of fair value puts the price at $1,613, which would mean that as things stand now, the gold price is too high. The gold price is currently above $1,700 an ounce and has been above that level for a while.

To argue that the gold price is too high right now, Invesco analysts looked at how many barriers of WTI oil can be bought using an ounce of gold. At 51 barrels of WTI, the yellow metal has never been so expensive. They note that the ratio has been increased by the weakness in oil prices and became even more extreme when WTI prices went negative, causing the calculation to stop making sense.

A return to the gold standard?

Invesco analysts argued that the exploding government deficits and growing debt are reasons to be concerned about the stability of the financial system. Government actions stand to debase the value of their currencies. They noted that the Federal Reserve, European Central Bank, Bank of England, Bank of Japan and Swiss National Bank have increased their balance sheets sevenfold in the 15 years ending at the end of next year.

With these types of concerns, they question how high the gold price could rise “in a catastrophic scenario.”

“One way to think about this is to imagine an outcome so bad that policy makers opt for a return to a form of gold standard,” they explained.

They noted that as of the end of April, the U.S. Treasury held 261.5 million ounces of gold. At $1,732 an ounce, the market value is $453 billion. They then question what would happen if that amount of gold had to back all U.S. currency. The analysts said if it replaced the monetary base, which was $4.85 trillion in April, it would imply a gold price of about $18,500 an ounce.

They add that while that’s a dramatic statement, it may be an overstatement because much of the monetary base consists of reserves held by banks in the Federal Reserve System. Those reserves have increased dramatically since the Fed started its latest round of quantitative easing.

If gold only had to back the $1.89 trillion in notes and coins that are in circulation as of April, then the implied price of gold is around $7,225.

A global view of the gold standard

If looking beyond the U.S., Invesco analysts note that the World Gold Council estimates that official entities held 33,919 tons of gold at the end of last year. The current market value is $1.9 trillion. If that amount of official holdings had to back the amount of notes and coins in circulation, which amounts to about $8 trillion, gold would be worth about $7,336 an ounce.

That’s based on data from the Bank for International Settlements, which indicates that there was $6.7 trillion in cash circulating at the end of 2018 in economies accounting for 85% of world GDP, based on GDP data from the World Bank. Invesco analysts add that the official gold holdings represented just 17% of “above ground” gold holdings, based on World Gold Council data.

Echoing something Crispin Odey said in an investor letter recently, they said they believe private citizens and entities wouldn’t be allowed to freely hold gold if the gold standard were reintroduced. They note that there were restrictions on holding gold in the U.S. between 1933 and 1974, and federal law allows for gold bullion to be confiscated. Including all the “above ground” gold in the calculation, the value of gold declines to $1,259 or $2,378 if jewelry is excluded from the confiscation.

Behavior without the gold standard

Invesco analysts note that the value of gold can be essentially whatever they want it to be, based on how they do the calculation. Thus, they looked at it from the point of view of investor behavior around buying the yellow metal.

They looked back at the introduction of their gold model in 2016, which used a regression model to explain changes in gold prices by changes in the real 10-year U.S. Treasury yield, the 10-year U.S. inflation breakeven and a trade-weighted dollar index.

Invesco analysts noted a change in behavior around 2007. Before that year, gold prices climbed as inflation expectations increased. After 2007, gold prices fell when inflation expectations increased. They explained that the coefficients on the other two variables were always negative. They explain this by saying that gold buyers became more fearful of deflation than inflation after 2007.

Then that model started to have problems around the time President Trump was elected. Since November 2016, the gold price was well above the value predicted by the model. Thus, they re-ran the model and found that the best statistical fit comes from a dummy variable that was “switched on” in November 2016.

The analysts add that all the coefficients are still negative, which means that the gold price increases when real yields, inflation expectations, or the dollar decline. They said the coefficient on the dummy variable is positive and suggests gold has received about a $230 boost during Trump’s presidency. They also said gold buyers seem more concerned about deflation than inflation.

The post Return to gold standard could value gold at $7,000/oz. appeared first on ValueWalk.