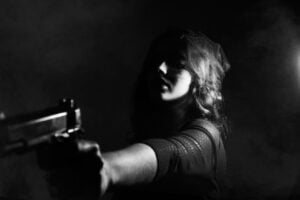 The Best Executive Gun-Control Action Biden Can Take; With New Federal Laws Unlikely, Incentives For State Action Should Be Tried

WASHINGTON, D.C. (March 25, 2021) – With new gun-control legislation unlikely at the federal level, President Joe Biden is considering taking executive actions to reduce gun violence, but the most effective action he can take without congressional approval is apparently not among them, says public interest law professor John Banzhaf, who hopes Biden will be asked about it at his press conference.

With any significant legislation unlikely to pass in the U.S. Senate, Biden is reportedly considering executive actions he can take, including:

But because the measures Biden and many experts believe would be far more effective, and contained in two House bills – e.g., broadening background checks and banning assault-type weapons – seem doomed in the U.S. Senate, the most effective executive action Biden can take would be to provide a powerful incentive for individual states to adopt their own strong gun-control laws using a well established and generally accepted technique clearly within his executive powers, argues Prof. Banzhaf.

If the President were to simply announce that federal grant applications related to crime prevention and law enforcement will be accepted – or at least given preference – only from states, and entities within states, which have comprehensive gun-control laws in place by a stated date (e.g. May 1, 2021), he would put enormous pressure on states to adopt the types of measures he has publicly proposed, and which the public overwhelmingly supports, but which the U.S. Senate is apparently unlikely to adopt.

After all, says Banzhaf, it makes little sense to give tens of millions of taxpayers’ dollar for fighting gun violence to states which refuse to adopt minimal gun-control laws to protect their own citizens.

Requiring or even strongly pressuring states which want federal grants to have in place gun-control measures which meet minimum standards and requirements would put very strong pressure on individual states to take effective actions aimed at reducing gun violence, since few states would want to risk losing out on vital law enforcement grants, not only for themselves, but also for their cities, counties, towns, and even PBAs and other nonprofit organizations.

Since government grants and the conditions under which they are to be awarded are largely discretionary, such directives from the President would be perfectly legal – unlike any executive order attempting to directly impose federal restrictions related to guns – e.g., bans on assault weapons and/or large capacity magazines – which would be subject to legal challenge.

Indeed, imposing conditions to receive federal grants (e.g., not to discriminate, to protect the environment, etc.) are commonplace, generally accepted, and have been used successfully and very effectively by numerous administrations for many years.

Fortunately, the Congressional Research Service agrees, and has spelled out the legal basis for imposing such conditions in its “The Federal Government’s Authority to Impose Conditions on Grant Funds.”

So a president who already broken his pledge to send a bill to Congress on his first day in office repealing liability protections for gun manufacturers and closing background-check loopholes, and who has just promised to “use all the resources at my disposal to keep the American people safe,” should be asked whether he would at least consider what is probably the most effective executive action he can take now to save American lives from further gun violence, argues Banzhaf.