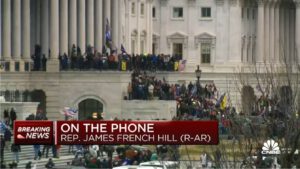 Donald Trump, the Capitol and the military-media-industrial complex.

The Establishment Strikes Back

In the week since January 6th’s Capitol Offense, President Trump has been deplatformed by Twitter (TWTR), Google’s (GOOG), (GOOGL) YouTube, and Facebook (FB). Salesforce (CRM) has cut off his campaign’s email service; Shopify (SHOP) and GoFundMe have cut his organization off as well. Trump-supporting Senator Josh Hawley has had his book contract canceled by ViacomCBS (VIACA) subsidiary Simon & Schuster, and Hallmark demanded Hawley return their previous political contributions to him. Meanwhile, Amazon’s (AMZN) AWS division and Apple’s (AAPL) app store put the alternative social media platform Parler out of action.

In addition, Walmart (WMT), Amazon, Morgan Stanley (MS), Dow (DOW) and AT&T (T) announced they were cutting off donations to Republicans who challenged the certification of the electoral vote. The ostensible reasons for these companies’ actions were to defend democracy and protect against violence. Let’s consider the more likely rationale and its investment implications.

Deplatforming an elected President and exerting corporate pressure on legislatures may seem like an odd way to “defend democracy”, but this is the argument establishment types on both the nominal left and right of center have been making.

Important to note that after social media companies banned Trump and his insurrectionists and other corporations withdrew support from his collaborators, more elected Republicans are now opposing him. This is the power & duty that American businesses have to uphold our democracy.

Former CIA agent and 2016 Presidential spoiler candidate Evan McMullin offers one example of that above. Also, none of these corporations took issue with legislators objecting to previous elections.

So the lead House manager impeaching Trump for, among other things, refusing to accept the results of the 2020 election is James Raskin who … objected to certifying the 2016 results. #CantMakeItUp https://t.co/SlOhpo6jrd

Preventing Violence: Trump Called For A Peaceful Protest At The Capitol

The other ostensible reason some of these corporations have given for their actions is preventing violence, but this strains credulity as well. For starters, President Trump explicitly called for peaceful protest in his speech on January 6th (you can read the transcript of the speech here to see for yourself), and, reportedly, meta data indicates the rioting at the Capitol started twenty minutes before Trump’s speech ended.

IMPORTANT: I worked with the New York Times to help construct an official timeline of the events that lead to the Capitol Hill siege

Considering that Trump spoke a mile and a half away from the Capitol, at the Ellipse, it’s likely these initial rioters didn’t hear any of it anyway.

Also, if social media and other companies were concerned about preventing violence, they wouldn’t have supported the perpetrators of the civil unrest last year, which included the worst rioting in America in a half century. And they would have censored Democratic politicians such as Speaker Nancy Pelosi, Senator Kamala Harris, and Representatives Ayanna Pressley and Maxine Waters who arguably incited violence last summer. 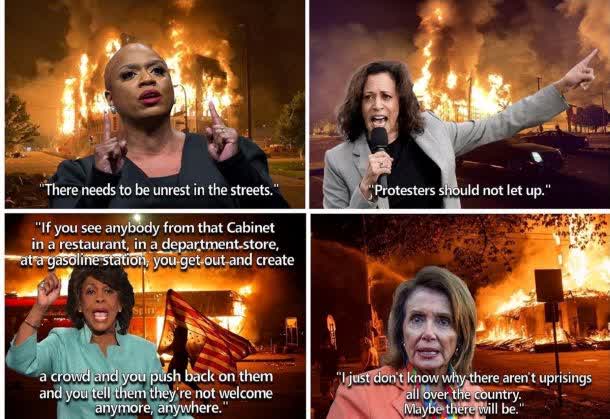 President Trump ran on three broadly popular policies that are opposed by America’s bipartisan establishment: balancing trade, restricting immigration, and avoiding more military adventurism abroad. The point of anathematizing Trump (and possible successors such as Hawley) is to restrict the range of acceptable politics to exclude those positions. 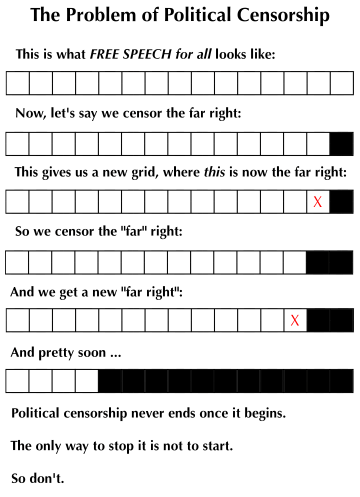 The meme above illustrates the principle.

It’s notable that the media have elevated Karl Rove and Liz Cheney to attack Trump.

Not only are they anathematizing Trump, but they’re rehabilitating the George W. Bush wing of the GOP in the process. https://t.co/BT6njTBQwb

Good thing she’s getting that practice in, ain’t much else to breathe where her entire family is going https://t.co/2F3aF30Gec

Their goal seems to be to make neoconservatism the right edge of our political Overton window. So our leaders can debate whether to bomb Iran or just sanction it, and whether dentists should pay a top income tax rate of 35% or 40%, all while agreeing on the need for more immigration, and unilateral free trade.

“Go woke, go broke” is the theory that if corporations pursued left-leaning policies, they would ultimately hurt their businesses, and so they would be discouraged from doing so for too long. This isn’t quite correct, as Mike Cernovich noted recently.

They don’t care. Twitter is a late stage company. All the founders and early VCs made their huge exits.

Twitter can exist as a shell for years, same as happened with Yahoo.

People who go to work for Twitter are ideologues glad to draw a 6 figure salary.

On the plus side for Woke Capital, the apparent neutering of Senator Josh Hawley (whose canceled book was titled “The Tyranny Of Big Tech“) means Silicon Valley likely won’t have to worry about antitrust action in the near future.

On the con side, this is likely their high water mark internationally, as foreign governments won’t want to risk having done to them what Silicon Valley did to Trump.

It’s bigger than any one company. America has gone from indispensable to untrustworthy.

The world can’t trust US leadership and is uncoupling. https://t.co/sphRHn0ETI

Twitter got a first taste of that this week, with Uganda shutting it down ahead of that country’s election.

The backstory is that Twitter and other tech giants tried to interfere in the Ugandan election by mass-banning certain accounts.

So Uganda took the entirely appropriate step of leveling the playing field by banning Twitter altogether. The U.S. should have done the same in 2020. https://t.co/RnFj9o3rQC

As the popularity of the saying “go woke, go broke” suggests, people have the tendency to confuse what they want to happen with what will happen. We want companies that do egregious things to fail. That doesn’t mean they will. At Portfolio Armor, we use an objective method of analyzing securities that takes our emotions out of the equation: we gauge options market sentiment (If you’re interested in the nuts and bolts of this, we broke down an example of this analysis with a small cap stock here). It’s worked fairly well recently. For example, here’s the performance of our most recent top names cohort to finish its six month tracking period.

Note that Shopify (SHOP), one of the companies that took action against Trump this week, was one of our top names back in July. A couple of other companies mentioned above for taking action against Trump and other Republicans this week, Amazon and Twitter, were top names of ours in recent months. What is options market sentiment saying now about them, and other companies that took actions to “defend democracy” this week?

Hallmark is a family-owned company, and GoFundMe isn’t publicly traded either. Of the other companies, our gauges of options market sentiment aren’t particularly bullish on any of them now. Whether that’s due to their recent actions, general market conditions, or other factors, I don’t know, but it’s striking nevertheless.

The post The Establishment Strikes Back appeared first on ValueWalk.