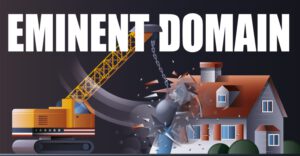 There are two things people think of when they come to America: freedom and land. Our country prides itself on having privileges and freedoms for each and every citizen. One of the most crucial of these freedoms is the ability to own property. So what happens if the government takes that away from us?

Get Our Icahn eBook!

Get our entire 10-part series on Carl Icahn and other famous investors in PDF for free! Save it to your desktop, read it on your tablet or print it! Sign up below. NO SPAM EVER

What Is Eminent Domain?

Through a process called eminent domain, our government can claim private property without the consent of the owner. Typically, they must provide just payment and they can only take land if it is used for public use. However, the line between public and private is often blurry in eminent domain cases and it affects some groups of American citizens more than others.

In the areas most commonly taken advantage of by eminent domain, only nine percent of residents have a bachelor’s degree. These areas also consist of a population where over half of them are renters. This means that when it comes to just compensation, they receive little to none because they do not own the property.

The Issue Of Injustice

This issue is not a new one. In the span of fourteen years from 1949 to 1963 over 177,000 families were displaced by eminent domain. There were also an additional 66,000 individuals that were displaced during this interval as well. Throughout this time, only 48,000 new housing units were constructed. Less than half of these units were priced affordably for low-income families. The vast majority– over 78%– of people displaced were racial minorities.

Eminent Domain highlights an even bigger issue in our government: injustice. While the purpose of eminent domain is to provide public benefit to people who need it most, all it appears to do is continue to abuse the people they are trying to help.

By focusing on the bottom line and using this governmental privilege to help the private developers, our government is abandoning the majority of their constituents. Failure to fix this governmental policy will continue to contribute to our backwards society that prioritizes power over the people.

The post The Numbers Behind Eminent Domain appeared first on ValueWalk.